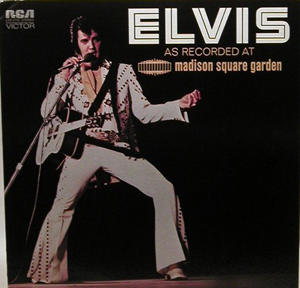 Elvis Presley pictured with an acoustic guitar on an album cover late in his career. Image courtesy of LiveAuctioneers.com Archive and Quinn’s Auction Galleries.

VERMILLION, South Dakota (AP) – A 16th-century Amati violoncello displayed in the National Music Museum has long been nicknamed “The King,” but the ghost of a legendary rock’n’ roller has arrived in South Dakota to reclaim his regal moniker.

A slightly smashed acoustic guitar played by Elvis Presley on his final tour in 1977 now greets visitors in front of the museum’s main galleries. The Martin D-35 was tossed aside by “The King” during a St. Petersburg, Fla., concert after suffering a broken strap and string, said Robert Johnson, a Memphis-based guitarist who donated the item.

“He broke the strap and at the same time he broke a string,” said Johnson, noting Presley’s frustration. “He tosses it straight up in the air and it just comes down.”

Johnson, who played with singer Isaac Hayes and the band John Entwistle’s Ox in the 1970s, donated the Elvis guitar and four other celebrity items to the National Music Museum, which is tucked away in an old Carnegie library building on the University of South Dakota campus. The museum’s trustees also purchased Johnson’s 1967 Gibson Explorer Korina wood guitar, formerly owned by Entwistle, who’s best known as a member of The Who.

“These instruments probably make the biggest splash of any celebrity things that we’ve had before,” said museum director Cleveland Johnson. “We have some nice things, but this is a degree of magnitude higher.”

Cleveland Johnson, who is not related to Robert Johnson, took over as director in November after the retirement of Andre Larson, who’d been at the helm since it was established in 1973. The museum’s holdings grew out of a private collection owned by Larson’s father, Arne B. Larson, who continually added items while serving as a public school music director.

Robert Johnson said he owns some 600 guitars and another 2,000 to 3,000 artifacts, so he began discussions with Andre Larsen in 2010 to get involved with the museum.

“I was trying to find a place to hoard the rest of my stuff so it could be in place,” said Johnson, 61. “It gets to be an overwhelming, oppressive burden to keep up with all this stuff.”

The museum’s 800 or so instruments on public display are the superstars of a broader collection of more than 15,000 pianos, harpsichords, guitars, horns, drums and other musical items. It includes a rare Stradivarius violin with its original neck, saxophones built by inventor Adolphe Sax, and the earliest French grand piano known to survive, an ornate green and gold instrument built by Louis Bas in Villeneuve les Avignon in 1781.

Cleveland Johnson said it has always been easy to drop names like Stradivari and Amati (whose centuries-old violins are considered the finest ever made) when he talks to people in classical music circles, but the new items will help the museum reach a different demographic.

“The motorcycle guys rolling across the state on their way to Sturgis, this would be a nice detour,” he said. “Or a bus tour going from Sioux Falls to Memphis or down to Branson, this would be a perfect stop off on the way.”

A $15 million expansion plan calls for tripling its 23,000 square feet (2,137 square meters) of gallery space, improving the entrance and revamping the vast archives where music scholars can peruse the thousands of instruments and documents not on public display. The limited space has not only prevented instruments from getting their proper display, but also has hampered curators’ efforts to find creative and hands-on ways to program and teach visitors and school groups.

The plan recently earned a federal seal of approval with the awarding of a $500,000 challenge grant from the National Endowment for the Humanities, whose chairman Jim Leach called the facility “a national treasure.”

Cleveland Johnson said the museum is shifting its focus from acquisitions to developing programs to get the attraction better known around the country.

“These instruments will take us in that direction, will take the veil off, I hope, for much of the American public.” 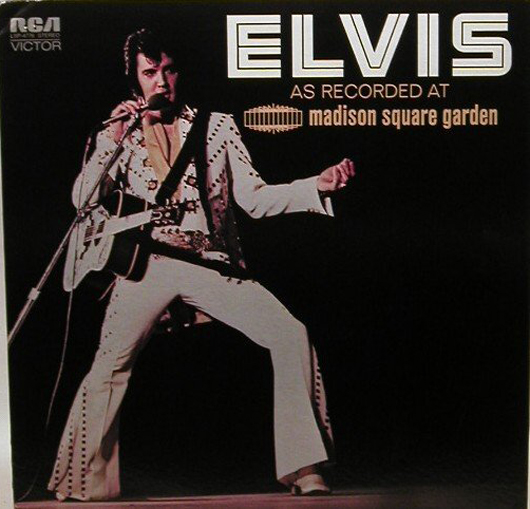 Elvis Presley pictured with an acoustic guitar on an album cover late in his career. Image courtesy of LiveAuctioneers.com Archive and Quinn’s Auction Galleries.