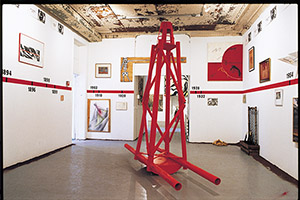 The exhibition will explore how historical events have influenced artists including the opening of the Panama Canal and U.S. occupation of the Canal Zone; the monoculture economy of Central America and the devastation left by the United Fruit Co.; and U.S. involvement in the coup d’état of Guatemala’s socialist government.

Archival material from “Timeline: A Chronicle of U.S. Intervention in Central and Latin America” will begin the exhibition. First presented in PS1 New York in 1984, the installation charted over 160 years of foreign intervention in the region. Three decades after the work was first shown, this exhibition will reveal how histories of intervention continue to be a concern for a younger generation of artists, showcasing work by Humberto Vélez, Michael Stevenson, Oscar Figueroa, Andreas Siekmann, Regina José Galindo, Naufús Ramirez-Figueroa and José Castrellón.

Humberto Vélez’s film The Last Builder, 2008 refers to 19th century U.S. colonialism in Panama and to the building of the Panama Canal. The country is also the focus of Michael Stevenson’s abstract film Introducción a la Teoría de la Probailidad, 2008, which charts the last shah of Iran’s exile in Panama through the eyes of his bodyguard.

Two artists will address the history of the United Fruit Co., an American corporation that gained huge influence over the so-called “banana republics” in the first half of the 20th century. A new two-part commission by Andreas Siekmann will map out the monoculture economy of the region, while Oscar Figueroa’s Deméritos, 2013, makes visible the way the company controlled workers’ movement. In this video work, Figueroa makes a 3,275-meter line along the Turrialba railway, using a blue plastic material which is traditionally used to wrap bunches of bananas.

Works by Regina José Galindo and Naufus Ramírez Figueroa center on the history of Guatemala. In Tierra, 2013, Galindo makes reference to the victims of the dictator Rios Monttís, while Figueroa’s A Brief History of Architecture in Guatemala, 2010, uses performance to represent Guatemalan architectural history. His performance work shows dancers in costumes representing different architectural styles, which eventually disintegrate as they dance to a traditional marimba melody.

The exhibition will also include work by the photographer José Castrellón, who portrays the cultural changes taking place in Panama today. His project Kuna Metal, 2013, explores the appropriation of heavy metal music by the indigenous Kuna people.

“Project Space: A Chronicle of Interventions” is curated by Shoair Mavlian at Tate Modern and Inti Guerrero, TEOR/éTica, San Jose, where the exhibition will travel later this year. The curatorial exchange is supported by Tate International Council with the collaboration of Gasworks. 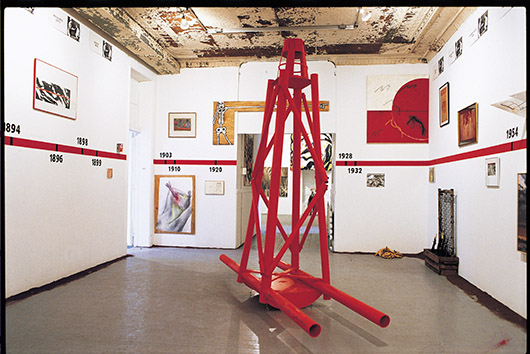