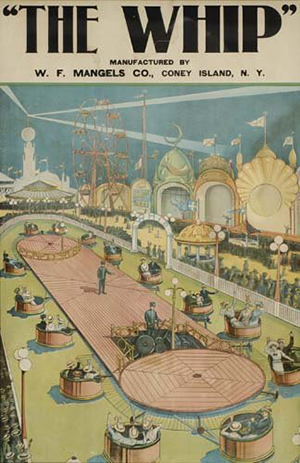 A poster by an anonymous illustrator of William F. Mangels’ ‘The Whip,’ 39 1/2 by 25 1/2 inches. Invented by Mangels in 1914, The Whip was a favorite with ride operators because as a ‘flat ride’ it was less expensive to acquire and was compact. Image courtesy of LiveAuctioneers.com archive and Swann Auction Galleries.

NEW YORK (AP) – A new exhibition is honoring a German immigrant who has given generations of Americans joy, thrills – and sometimes nausea.

William Mangels was a mechanical and creative genius who enthralled the masses with his carousels, shooting ranges and rides like the Whip and Tickler during the early part of the 20th century. He’s the subject of an exhibition at Brooklyn’s historic Green-Wood Cemetery where he’s buried – just miles from Coney Island where he lived and worked.

“William F. Mangels: Amusing the Masses on Coney Island and Beyond” runs through Oct. 26 at the cemetery’s chapel.

The show’s quaint vintage artifacts and carousel music easily transport visitors to a bygone era when rides were simpler but no less thrilling.

From 1890 until his death in 1958, Mangels patented over 50 inventions, including the mechanism that’s still used today to get carousel horses jumping up and down. He also wrote a book about the amusement park industry and founded the American Museum of Public Recreation near his W.F. Mangels Co.

“The Mangels factory made Coney Island the amusement center of the universe at the turn of the last century, attracting craftsman and artisans from all over the world,” said Charles Denson, executive director of the Coney Island History Project.

Some of his rides still operate at amusement parks across the country, like the B&B Carousell whose wooden horses were carved by Charles Carmel. It returned to Coney Island’s boardwalk after a $2 million restoration last year as part of the new Steeplechase Plaza and revitalization of the famous Brooklyn playground.

Other Mangels-built carousels are still in use in New York City’s Fresh Meadows Park in Queens, Congress Park in upstate New York, and Portland, Ore.

Mangels came to the United States from Germany in 1883 when he was 16. He opened his factory seven years later because he believed “human beings have a natural craving for fun.” His first invention was the Razzle Dazzle, a large hand-powered swing. Other rides soon followed, including the Whip. The three-seater cars operate on a turn-table platform that force the rider to one side as the car whips around the corner.

“It became his most popular and sensational ride,” said Jeff Richman, Green-Wood’s historian who owns the two Whip cars in the show. “He sold 500 as franchises throughout the world,” including Paris, London and New Zealand. Playland in Rye, a New York City suburb, has two Whip rides and a Mangels carousel.

“He was the biggest manufacturer of amusement park rides, carousels and shooting galleries in America in the first quarter of the 20th century,” he added.

The exhibition also has the original plans for another Mangels’ classic – the Tickler – which carried barrel-like cars by steam engine up a wooden incline and then sent them down bumping and spinning through a pinball machine-like maze.

Other artifacts include the original B&B Carousell ticket booth and cash box and a steel cast bull’s-eye shooting gallery complete with the gears, chains, belts and electric motor that drove it. Patents, blueprints and other archival material round out the story of Mangels’ passion.

“You would sit on it and it turns and by centrifugal force it pushes you off,” he said. He and his friends “laughed hysterically” all through the ride. But then his friend vomited.

“We laughed even harder,” he said.

Converting lighthouses for private use can be tall order