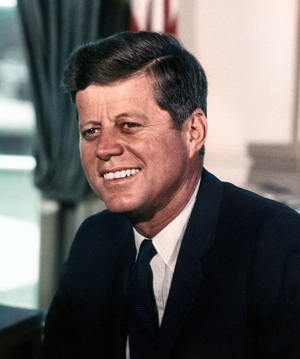 BOSTON (AP) — Fifty years later, Richard Donahue still remembers the bitter cold and the crowds at the U.S Capitol stamping their feet to stay warm as they waited for John F. Kennedy to deliver his inaugural address on the day the torch was passed to a new generation.

The speech would quickly warm up the partisan crowd, Donahue recalled. Neither he nor anyone there that day could have imagined how ingrained in the American consciousness JFK’s words and phrases would become and how easily they still come to mind a half-century later.

“It just gave us a sense that the future is now, you’re a part of it, and away we go,” said Donahue, now 83, a friend of the Kennedy family who earned a prized ticket to the inauguration on Jan. 20, 1961, after campaigning in the primaries and general election. He had, of course, heard Jack speak countless times. But never with such conviction.

“He seemed to give everyone the confidence that we could do whatever we wanted as a country,” said Donahue, a retired Boston attorney and trustee of the John F. Kennedy Library and Museum.

The library has added a special exhibit commemorating the 50th anniversary of the inauguration, including some rare and never-before-displayed artifacts such as the black top hat and brown suede gloves that Kennedy wore that day along with the ivory-colored Oleg Cassini gown that Jacqueline Kennedy wore to an Inauguration Eve gala.

As he prepared to take office, Kennedy was concerned with not only what he would say, but how he would look, said Stacey Bredhoff, the museum’s curator.

“He was very aware that this was his first appearance on the world stage as president of the United States and he had very deliberately decided on the kind of image he wanted to project,” she said.

Other memorabilia include an invitation to the inaugural luncheon at the Capitol, autographed not only by JFK and Jackie but the rest of the head table, including Vice President Lyndon Johnson and Lady Bird Johnson, then-Supreme Court Chief Justice Earl Warren, former President Harry Truman and Bess Truman, and Edith Bolling Wilson, widow of President Woodrow Wilson.

Also on display: an autographed copy of composer Leonard Bernstein’s “Fanfare for the Inauguration;” a congratulatory letter to Kennedy penned by Eleanor Roosevelt; and a draft of a congratulatory letter from Ernest Hemingway, who watched the inauguration on TV and later wrote, “It is a good thing to have a brave man as our president in times as tough as these are for our country and the world.”

From the days leading up to inauguration is a typewritten copy of the famed “city upon a hill” speech JFK delivered 50 years ago Sunday to the Massachusetts Legislature as a sort of farewell to his home state. A keen student of history, Kennedy saw a parallel between that speech and an address Abraham Lincoln gave in Illinois before assuming the presidency a century earlier.

In the Boston speech, Kennedy compared the challenges he would face as president to those facing the first Puritan settlers of Massachusetts in the 1600s. Quoting from John Winthrop, an early governor of the colony, Kennedy said: “We must always consider … that we shall be as a city upon a hill — the eyes of all people are upon us.”

Touring the museum with her daughter on a recent day brought memories flooding back for Muriel Barnes, 63, of Boston.

“It was a real time of change in our community … I think people were looking forward to that change,” said Barnes, who grew up in Johnstown, Pa., and recalls watching the election and Kennedy’s inauguration on television.

“He was young and there were a lot of interesting things happening to him and the campaign was well-run enough that a 13-year-old kid noticed,” said Barnes, who believed her parents were Republican, though they rarely spoke about politics.

Barnes’ daughter, Randi Cox, 44, a history teacher at Stephen F. Austin State University in Nacogdoches, Texas, includes discussion of the 1960 election in her classes. Last semester, she had her students analyze campaign commercials that were run by Kennedy and his GOP opponent, Richard M. Nixon.

“They could tell that Kennedy was good with people and Nixon wasn’t,” Cox said.

As a historian, Cox worries that much of what Kennedy preached in his inaugural address and presidency has been forgotten, including his insistence that America strive for the morally correct position, not just the politically or militarily correct one.

The exhibit, “Passing the Torch — the Inauguration of John F. Kennedy,” will run through the summer. 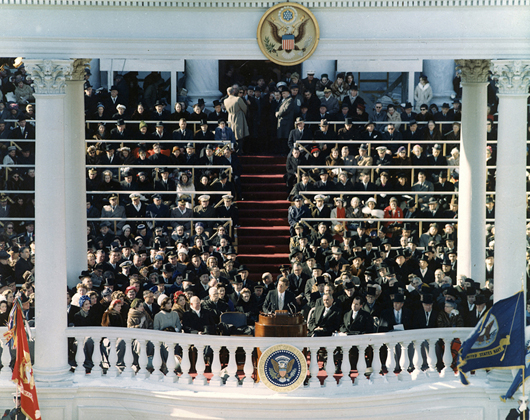 Scores of discoveries to be realized at Rago’s auction Jan. 14
Scroll to top