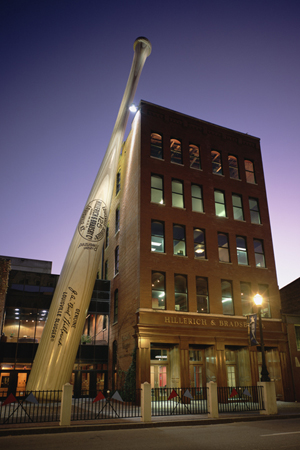 LOUISVILLE, Ky. (AP) – Grabbing a bat once swung by Johnny Bench brought a rush of cherished memories for James Montgomery during a visit to the Louisville Slugger Museum & Factory – where baseball memorabilia mixes with a close-up look at how the famed bats are crafted.

Just touching the bat used by the Hall of Famer had Montgomery reliving excursions to the ballpark with his father decades ago to watch his hometown Pittsburgh Pirates try to outslug the Cincinnati Reds and their “Big Red Machine” lineup that included Bench.

“That was pretty neat holding that bat,” Montgomery said after touring the museum and factory with his wife and in-laws. “It brings back those childhood memories.”

Hillerich & Bradsby Co. – a fifth-generation, family-owned company – has been crafting bats since 1884 and currently churns out about 1.8 million Louisville Sluggers each year.

About six in 10 big-leaguers currently use Louisville Slugger bats.

The sights and smells can tantalize visitors to the museum and factory – a must-see for baseball fans if they happen to be anywhere near Kentucky’s largest city. Towering outside is a 120-foot-tall steel bat that looms as a landmark in downtown Louisville.

Inside, visitors stroll through the heart of the factory – where fast-churning machines turn cylinder-shaped billets of wood into bats used from recreational leagues to the big leagues. The factory is enveloped by the smell of the wood and the whirring sound of the equipment.

“You’re really in the factory,” said Montgomery, of suburban Dallas, whose family was in town for a swimming competition. “That was really cool. A lot of times you’re like on a sky bridge and they’re all the way down on a lower level.

Next to the factory is the museum, which features a treasure trove of bats once gripped by a “Who’s Who” of baseball greats. There are lots of photos and interactive displays.

The most eye-catching display might be a bat used by Babe Ruth in 1927, when he hit 60 home runs. The 40-ounce bat has 21 notches carved along the top of the Louisville Slugger logo – one for each round-tripper that Ruth slugged with the bat.

Another display shows the Louisville Slugger that Hank Aaron used for his 700th home run on his way to surpassing Ruth on the career home run list. Opening a drawer in the same case reveals bats used by such greats as Cal Ripken Jr., Eddie Murray, Mike Schmidt and Tony Gwynn.

Just a short toss away is a bat used by Ted Williams late in his fabled career, and a nicked bat once swung by the tragic “Shoeless” Joe Jackson, who was banished from baseball along with several teammates after being accused of conspiring to throw the 1919 World Series.

All those wooden treasures are under case, but visitors can take hold of baseball history in a popular display featuring bats used by Bench and New York Yankees great Mickey Mantle, plus two contemporary sluggers – David Ortiz and Evan Longoria.

After donning white gloves, visitors in the “Hold a Piece of History” exhibit can clutch the bats, pretending they’re sending a fastball soaring over the outfield fence. They’re asked not to swing the bats, but it’s OK to slowly move the bat around to get a feel for it.

“The day before his father died, he and his father saw Mantle play, so that had always been a special memory for him,” she said.

There’s a batting cage where visitors can take cuts at 10 pitches for $1. Hitters can swing replicas of models used by Babe Ruth, Derek Jeter or other stars, or can use the company’s line of aluminum bats. Nearby is a 17-ton glove sculpture carved from Kentucky limestone.

There’s a theater where visitors can hear anecdotes on hitting from top players past and present. Other fan favorites are life-size mannequins of Ruth, Williams and Ken Griffey Jr. in the middle of the spacious exhibit area. Many visitors pose for pictures next to the sluggers.

Elsewhere is an exhibit showing the tremendous skills needed to hit big league pitching. The “Feel the Heat” exhibit shows how fast a 90 mph fastball travels from the mound to the plate. The ball pops with a loud thud into a dummy catcher after a lightning-quick trip to the plate.

Another room is devoted to special exhibitions. From April 25 through Sept. 6, it will feature a collection of paintings and sketches chronicling the Negro Leagues.

The approximately 30-minute factory tour gives visitors another hands-on experience. They move past cylinder-shaped wood billets shaped into bats – one every 30 seconds or so.

An employee demonstrates how bats used to be made on hand-turning lathes. Tiny wood chips fly as he shapes a bat using a process that used to produce one bat every 25 or 30 minutes.

Nubs cut off the bats can be taken home by visitors as mementos.

The tour passes piles of bats that are bound for use by major leaguers, who generally order 100 to 120 bats each season. Visitors watch rows of bats being dipped in various finishes.

At the end of the tour, each visitor is given a complimentary mini-Louisville Slugger. A spacious gift shop offers a wide range of T-shirts, sweat shirts, caps and other apparel. Visitors can also pick up personalized bats, complete with their favorite team’s logo.

At the front of the museum is “Signature Wall,” containing the signatures of more than 8,000 big leaguers who had contracts with Hillerich & Bradsby, from Hall of Famer Honus Wagner – who agreed to the first contract with H&B – up to today’s players.

The museum and factory are a short stroll from such other downtown attractions as the Muhammad Ali Center, a science center and the Frazier International History Museum.

The city’s performing arts center is down the street and Churchill Downs – home of the Kentucky Derby – only a short drive away. 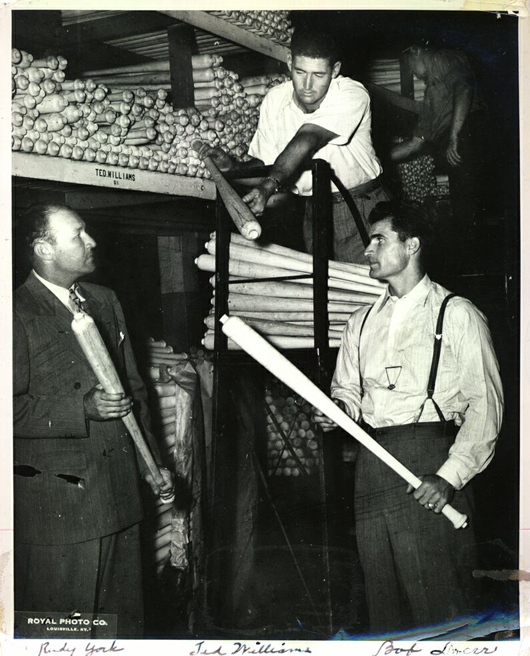 Ted Williams is pictured selecting Louisville Slugger bats at the factory. With him are Rudy York (left) and Bobby Doerr (right). The photo was likely taken in 1946-47 when the three were Boston Red Sox teammates. They combined for 1,021 home runs over their careers. Image courtesy Louisville Slugger Museum & Factory. 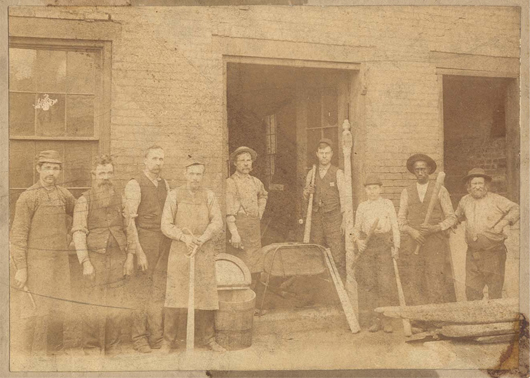 Company founder J. Fred Hillerich is second from the left in this late 1800s photo of the factory crew. His son, Bud Hillerich, stands in the doorway holding a bat on top of a butter churn. Bud made the company’s first baseball bat in 1884. Image courtesy Louisville Slugger Museum & Factory. 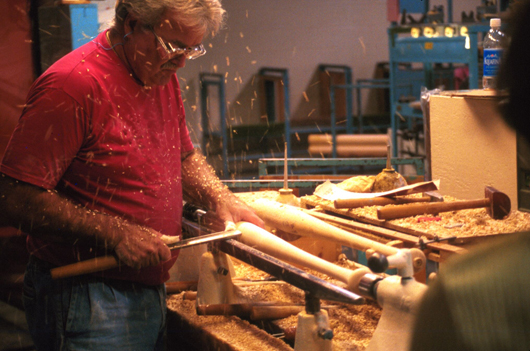