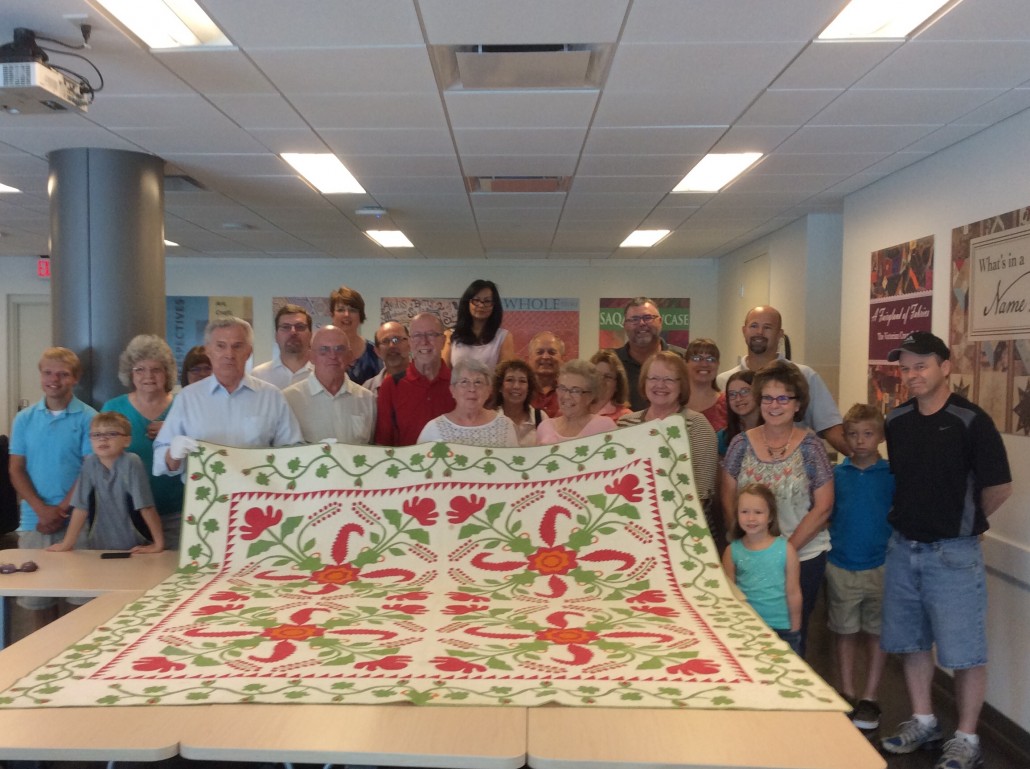 Members of the Myers clan gather around the Civil War-era quilt. Image courtesy of the International Quilt Study Center and Museum at the University of Nebraska-Lincoln.

Three years later, in 1863, the family dug up the trunk of hidden booty and moved north from Princeton, Missouri, to David City, Nebraska, the Lincoln Journal Star reported.

The 155-year-old quilt, with its still vibrant greens and reds, intricate cherries and stems has been the subject of much lore – and more than a few family squabbles, said Myers’ descendants, Alice Rotter of Lincoln and Norma Jean Stevens of Rapid City, South Dakota.

The women are great-great-granddaughters of Myers.

In the century and a half since Christina Myers embroidered “1860” into the upper right corner of the quilt’s back side, family members have coveted the masterpiece, hiding it from one another in toolboxes, barns and other unlikely places. The quilt even survived family members’ attempts to divvy it up into four equal squares so everyone could own a piece, as well as thwarting its theft for a buyer promising $5,000.

The cherry quilt recently came to its new permanent home – the International Quilt Study Center and Museum at the University of Nebraska-Lincoln.

Rotter, Stevens and fellow cousins Gene, Donn, Robert, Lee and Jay Knepper, unanimously agreeing on the final destination – something generations of cousins, aunts and uncles before them could not.

“It’s a lovely, lovely piece,” said Carolyn Ducey, the Quilt Center’s curator of collections, as she set eyes on the quilt for the very first time July 10.

Following a mandatory two-week isolation to ensure the quilt is not hiding “any unwelcome pests,” the quilt will hang in the newly completed expansion of the museum, Ducey said. It will become part of the museum’s permanent collection.

“Quilts like this are very, very valuable and very, very treasured,” Ducey said.

For the Quilt Center, it is a special acquisition.

“Very few quilts in this style have been documented. This creates a benchmark in our collection, and it gives us information we don’t have for other quilts,” she said.

What makes Myers’ cherry quilt unique, besides its design and preservation, is that the quilt is dated and its creator and its story are known, Ducey said.

And the story is one for the ages.

Cherry quilts, given then name because of the stemmed cherries appliqued in the design, became popular in the mid-1800s, when the newest fabric color – “turkey red” – first hit the market. Quilters squirreled away money in order to buy the red and green fabrics – considered a huge investment at the time, in part because of the Civil War and a shortage of available cotton.

“These were really important things to these makers and their families,” Ducey said.

In 1973, Agnes Close made that importance very clear in a letter to her cousin Robert Knepper and his wife, Maxine, (parents of Norma Jean).

In the letter, Agnes announces she is “looking for a home for the quilt.” She further documents why certain family members should not be allowed possession.

She writes of how Christina Myers gave the quilt to her son William Myers. But William failed to designate a beneficiary upon his death, which started a quarrel lasting three generations.

All four of William’s children wanted the quilt. One sister suggested divvying it up into four equal pieces, but Walter, the only boy in the family, announced the quilt must stay with someone who had the Myers name (him).

“The quilt was never given to Uncle Walt – he just took it,” Agnes wrote in her letter.

Before he died, Walter gave the quilt to his son Dean, much to the dismay of daughter Bessie.

According to family lore, Bessie simply decided that she would wait until her brother was out of the house and then steal the quilt.

But Dean was one step ahead of her.

“Dean hid the quilt in a toolbox on top of the barn so Bessie couldn’t find it,” Agnes wrote. “Dean says Bessie knows someone in Lincoln who will give her $5,000 for the quilt, and she wants to sell it.”

To keep the quilt from Bessie, Dean gave it to a cousin, who in turn gave it to her sister – Agnes Close.

“Bessie is in a hurry for me to die so she can get it,” Agnes wrote in her letter to the Kneppers. “I’m sure if anything happens to me the quilt is doomed for the auction block if it is here.”

Wanting to thwart Bessie, she secretly sent the quilt to the Kneppers – promising not to tell anyone.

For many years no one knew about the quilt, said Norma Jean Stevens. After her mother’s death, Norma Jean took the quilt to a family reunion. The cousins talked about what to do with such a fragile piece of family history.

Aunt Mary Ann Leefer suggested they donate it to the Quilt Center, where she was a volunteer.

It was an idea everyone could agree upon.

“The museum is the best place for it,” Stevens said. “This way it will be taken care of and the family will know where it is.”

And despite its physical location, the quilt will always belong to the family, Ducey said.

Michaan’s launching Aug. 8 sale with jewelry, then cruising to nautical i...
Scroll to top