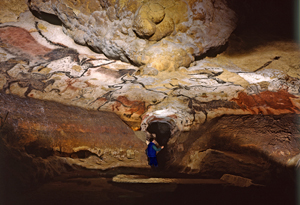 A wide-angle view of the Hall of Bulls shows the immense size of the Lascaux cave paintings. The painted animals are accompanied by unknown symbols, which are found throughout the cave complex. © CNP – DRAC – MCC

CHICAGO (AFP) – Stunning reproductions of the famed cave paintings of Lascaux are being displayed for the first time outside of France at an exhibit in Chicago opening today at the Field Museum.

Meticulously copied to the millimeter, these full-size replicas are one of the only way to see these images, since the cave was closed to the public in 1963 to preserve the ancient masterpieces.

The dimly lit gallery allows visitors to imagine they are walking through the cave as they stand beneath rugged panels and marvel at how cave dwellers used the contours of the stone walls to add perspective and depth to the images.

“With a global treasure like Lascaux you can’t egotistically keep it to yourself,” said French Senator Bernard Cazeau, president of the Conseil General of Dordogne, which organized the traveling exhibit.

“Plenty of people are unable to come to Dordogne to see our museum and so – thanks to new technology – I thought we could bring Lascaux to the world,” he told AFP. “Certainly some who see the exhibit will want to discover more about Lascaux.”

The museum in Lascaux currently only displays about half of sprawling cave’s nearly 2,000 paintings, but it is working on expanding to a full reproduction, to open in 2016.

Discovered in 1940 by four boys exploring a deep depression caused by a falling tree near Montignac, the Lascaux caves have been described as the Sistine Chapel of prehistoric art.

More than a million people flocked to southwestern France to explore Lascaux before it was closed to the public and 10 million have visited the reproduction which opened in 1983.

The paintings are believed to be more than 17,000 years old and their meaning and purpose remain a mystery despite 70 years of study.

Some believe the paintings are spiritual in nature and depict visions seen by the artists while they were in a trance-like state. Others think the artwork either tells the story of past hunting success or was part of a ritual to bring success on the hunt. Another theory is that the animals could represent a prehistoric star chart.

The cave was likely a cultural center of some kind that drew tribes from far away for important rituals, said Robert Martin, curator for anthropology at the Field Museum.

While reindeer was the dominant food source for the nomadic hunters who lived in the region at the time, they do not figure among the more than hundreds of animals covering the walls.

There was also only one clear image of a person found among the paintings, believed to be a shaman because of the drawing’s placement deep in a shaft at the center of the cave’s sanctuary.

The artistic complexities of the Paleolithic paintings show that these “cave men” were far more complex than many people would imagine, even though they were living about 7,000 years before the domestication of plants and animals, Martin added.

“For most people in America this is probably the only way they’ll ever see something close to the original,” Martin said during a media preview of the exhibit.

It also includes rare stone-age artifacts from the Field Museum’s collections and videos that offer a remarkable virtual tour of the cave and explanations of how Paleolithic people lived.

The exhibit will run at the Field Museum through Sept. 8. The next stops on the tour are Houston, Texas, and Montreal, Canada. 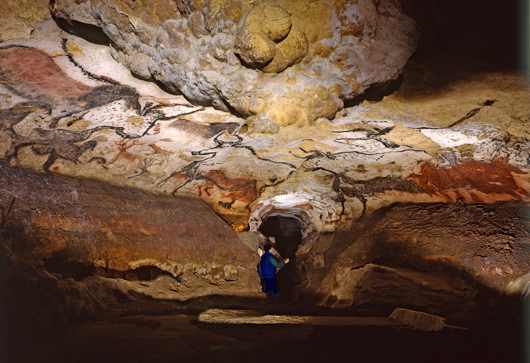 A wide-angle view of the Hall of Bulls shows the immense size of the Lascaux cave paintings. The painted animals are accompanied by unknown symbols, which are found throughout the cave complex. © CNP – DRAC – MCC

One of the most recognizable images from Lascaux, the Hall of Bulls contains 36 images of bulls, horses and stag. One bull measures 17 feet long—the largest animal depicted in cave art. © LRMH