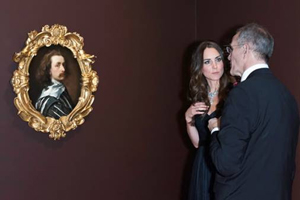 LONDON – The National Portrait Gallery has released a photograph of its patron HRH The Duchess of Cambridge being shown the Van Dyck self-portrait it is campaigning with the Art Fund to save for the nation. The Duchess was given a private view of the portrait, on display at the gallery, with director Sandy Nairne, during the Portrait Gala on the Feb. 11.

As the government export bar has been extended to allow a further five months of fundraising to prevent the portrait from going overseas to a private collection, the Gallery and the Art Fund have announced a current total of more than £3.5 million including over 6,000 individual contributions received from supporters both nationally and internationally.

The total amount includes a six-figure pledge from the Garfield Weston Foundation and multiple five-figure gifts from an anonymous individual supporter, who has significantly boosted funds at each crucial stage of the campaign. This follows the recent pledge of £1 million from the Monument Trust, the largest single gift yet given to the campaign.

The campaign began with an initial £1.2 million raised from the Gallery and the Art Fund including a grant of £500,000 toward the acquisition from the Art Fund (with an additional £150,000 offered toward a nationwide tour of the painting) and £700,000 from the gallery’s portrait fund and acquisition budget.

The National Portrait Gallery was given an initial three months to acquire Van Dyck’s exceptional Self-portrait (1640-1) priced at £12.5 million, following a temporary government export bar (issued on Nov. 14) to prevent it from being taken overseas. That export bar expired on Feb. 14 and has now been extended to July 13.

The painting has been in British private collections for nearly 400 years but has been sold to a private collector who now wishes to take it abroad. This is the only chance a museum or a gallery in the United Kingdom has of acquiring the masterpiece.

The gallery and the Art Fund have also launched two new social media initiatives in support of the Save Van Dyck fundraising campaign, a Thunderclap aiming to attract a minimum of 250 sign-ups by Friday, Feb. 28, and a cutout of Van Dyck’s frame that supporters can add to their social media profiles as a Twibbon. Go to www.savevandyck.org for more information.

“The growing support for the Van Dyck campaign is hugely encouraging. Everyone at the National Portrait Gallery is determined that this great painting should be on public view for the next 400 years,” said Nairne.

Sir Anthony Van Dyck’s last self-portrait is a work of huge international importance and the only portrait of the artist made during his time in Britain ever likely to be made available for acquisition by a British public collection. Given its key place in British art and history, the gallery, with the support of the Art Fund, plans to display the portrait both at its London home and, from early 2015, at partner museums and galleries around the country.

This enigmatic portrait dates from the end of Van Dyck’s life and presents an intimate image of an artist at work. He shows himself apparently in the act of painting, his hand raised in the process of applying paint to a canvas just out of sight. For today’s viewer, it conveys a sense of direct engagement with the artist as an individual, despite the passage of almost 400 years.

As well as enriching its present holding of three works by the artist, this Van Dyck painting, would make a significant addition to the National Portrait Gallery’s striking collection of self-portraits. These include works by Reynolds, Zoffany, Hogarth and Stubbs and, amongst twentieth-century and contemporary artists, Gwen John, Barbara Hepworth, Frank Auerbach, L S Lowry, Julian Opie, Gillian Wearing, Lucian Freud and David Hockney.

Born in Antwerp in 1599, Van Dyck was an artistic prodigy who worked as an assistant to Peter Paul Rubens. He came to Britain in 1632 at the invitation of King Charles I, making London his home until his death in 1641. Charles I was Van Dyck’s most famous patron, rewarding him with a knighthood and the title of Principal Painter. Van Dyck established himself at the heart of the English court, producing magnificent portraits of the royal family and many courtiers. However, beneath the shimmering surface of the court was a sense of growing unease. The late 1630s were a time of political upheaval and by the end of 1642 civil war had broken out in Scotland and England. Within a year of producing this portrait Van Dyck was dead, buried in Old St Paul’s Cathedral with the epitaph: ‘Anthony Van Dyck – who, while he lived, gave to many immortal life.’ 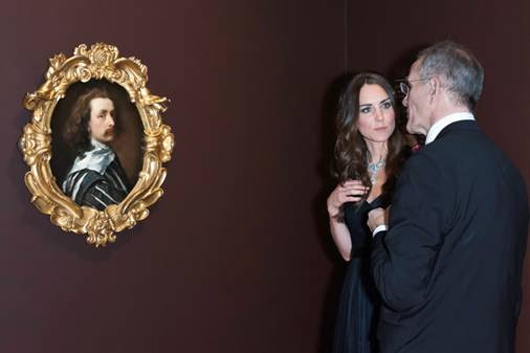