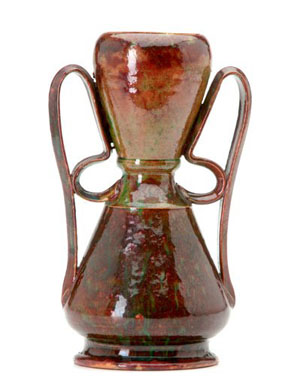 BILOXI, Miss. (AP) — He was known as Biloxi’s “Mad Potter,” a wild-haired man who spun curious creations on his pottery wheel at the turn of the 20th century.

George E. Ohr was dismissed by local folks as an eccentric during his life, but his ceramics are considered to be the first of American abstract expressionism.

Nearly 100 years after his death, Ohr’s art and the museum designed for it by Frank Gehry have become the latest post-Hurricane Katrina feat in a region still bearing scars from the killer storm.

Denny Meacham, the museum’s executive director, said the unique twist in Ohr’s ceramics is what inspired Gehry’s stainless-steel pods designed to dance among the live oaks at the site that fronts the Mississippi Sound.

“The combination of Frank Gehry and George Ohr is a perfect match. They both pushed the limits of what’s expected in their fields,” Meacham said. “All good art creates discussion.”

Ohr’s pieces are scattered throughout the museum grounds — from functional teapots to glazed vessels with lines mimicking rippling water. Visitors are given a primer on Ohr when they arrive at the welcome center: His early works were influenced by the Victorian age. His abstract style emerged around 1894, the same year a devastating fire destroyed his Biloxi studio. Ohr died in 1918.

The pods will house most of Ohr’s pottery when they open in 2012. The Center for Ceramics, where art classes will be taught by an artist-in-residence, also will open in 2012.

Barthe, a Bay St. Louis native, left the South to become a noted artist in New York and abroad in the 1930s and 40s. He sculpted the human form down to the slightest detail, even the iris of a woman’s eye in one piece. Another sculpture is the mold of a man’s sinewy body bent backward in acrobatic pose.

Twenty-two of Barthe’s pieces are in the exhibit on loan from different collectors, said Julie Gustafson, the museum’s marketing and development manager.

“It’s the largest retrospective of Barthe’s work. The works were shipped from mostly the northeast and the eastern seaboard,” Gustafson said.

Twenty-seven Andy Warhol prints, including his “Cowboys and Indians” series and images of Superman and the Wicked Witch of the West adorn the walls of the museum’s IP Casino Resort Spa Exhibitions Gallery. The Warhol prints are from the private collection of Wesley and Missy Cochran of LaGrange, Ga.

“Usually they look toward each other, but he allowed us to point them toward the water like sentinels,” Meacham said.

Though organizers consider the museum world-class, it is located on what has become a disaster-prone area — Katrina in 2005 and more recently, the Gulf oil spill. Both disasters had an impact on tourism, which Meacham acknowledged is important to sustaining the museum.

Still, Meacham believes the tourism traffic “will recover from the recession and the oil disaster just as it has always recovered from setbacks during the past 150 years.”

After Katrina, there were some who doubted the museum could be built at its chosen location. Katrina’s storm surge floated a casino barge off its moorings and crashed on top of the museum site.

Insurance provided $17 million to renew rebuilding efforts, said Jerry O’Keefe, who has donated $2 million to the project that’s named in honor of his late wife, Annette. Meacham said contributions from casinos and grant funds have helped to complete the first phase.

“The museum is definitely a symbol of recovery,” said O’Keefe.

Meacham said lenders and insurance require all art to be moved 25 miles inland if a storm develops in the Gulf of Mexico, “so consequently, hurricane preparation is an integral part of all of our exhibition planning.”

O’Keefe said he and other organizers knew they wanted the project to be touched by Gehry, whose Guggenheim Museum in Bilbao, Spain, drew massive crowds at its opening in the 1990s. And, it wasn’t as difficult as it might seem to persuade Gehry to sign on to the project.

“We have a mutual friend, and he was aware of George Ohr and his reputation,” said O’Keefe.

Not all of the museum’s campus was created by Gehry. A replica of the Pleasant Reed house, the first built by a former slave with money he earned as a free man, had been moved to the museum site in 2002, but was destroyed by Katrina.

The replica has since been rebuilt, and now serves as an interpretive center and currently has the exhibit, “The Native Guard: A Photographic History of Ship Island’s African American Regiment.”

In a tiny room with pine walls and floors, black-and-white photographs of the soldiers hang alongside excerpts from the diary of Col. Nathan W. Daniels, a white man who led the regiment. The exhibit, curated by a coast historian specializing in African-American history, gives a glimpse of the black military experience during the Civil War.

O’Keefe said part of the museum’s mission is to emphasize African-American contributions, art or otherwise.

“For so many years, their gifts to the country and state have been overlooked, misrepresented and ignored,” O’Keefe said. 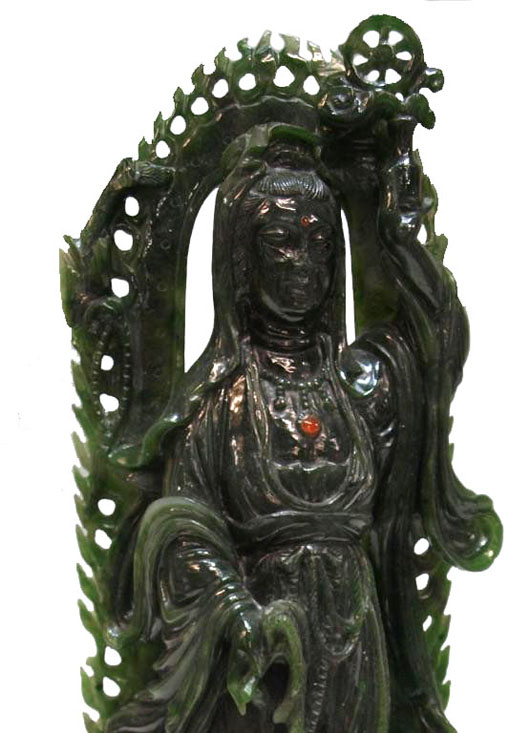 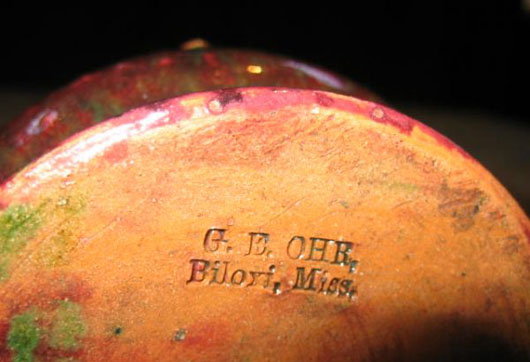 George Ohr mark incised under the base of the vase. Image courtesy LiveAuctioneers.com Archive and Craftsman Auctions.