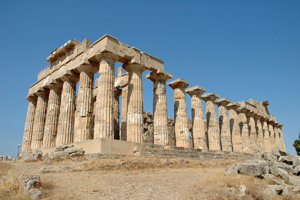 The Getty Museum will present an exhibit focusing on the Greek colonial settlement called Selinunte and its temples. This ruin is the Temple of Hera at Selinunte in Sicily. Image courtesy Wikimedia Commons.

LOS ANGELES (AP) – The J. Paul Getty Museum in Los Angeles and the Sicilian cultural ministry will collaborate to conserve art objects, stage exhibitions and conduct scholarly research.The agreement with the Sicilian Ministry of Culture and Sicilian Identity was announced Wednesday in Palermo and Los Angeles.

Sicilian museums will lend marble statues and ancient vases to the Getty Museum and the museum’s preservation staff will use their expertise in creating displays that protect the artwork from earthquakes, said Getty spokeswoman Rebecca Taylor.

Many pieces that go on display at the hilltop museum in Los Angeles will be sent back to its home institution with a custom-built seismic isolator base, she said.

The collaboration is an extension of the Getty’s 2007 agreement with the Italian Ministry of Culture, said the Getty’s acting director, Daniel Bomford.

“I am delighted that the Getty Museum has reached a mutually beneficial agreement with our colleagues in Sicily that allows us to expand our relationship with Italy to this very important region for the study of the ancient Mediterranean,” Bomford said.

The Getty will also organize a conference in Sicily on protecting museum collections from earthquakes.

Taylor said the curators and preservationists sought out two important and unique marble statues, The Marble Youth from Agrigento and Youth from Motya, which they want to evaluate for preservation and put on display in California.

The Getty Museum will present two exhibits with art borrowed from Sicilian cultural institutions. One will examine Sicily’s founding Greek colonies, which were some of the wealthiest and most powerful metropolises in the Mediterranean world. Another will focus on an important Greek colonial settlement called Selinunte and its temples.

Since 2007, Italy has secured the return of dozens of Roman, Greek and Etruscan artifacts in deals with museums, including the Getty and the Metropolitan Museum of Art in New York. Italy claimed artifacts were dug up and smuggled out of the country and sold to top museums worldwide.

Getty’s deal included no admission of guilt and the museum returned 39 ancient treasures. Italian art officials, in exchange, agreed to give long-term loans of other artifacts.

The museum launched a similar partnership with Italy’s National Archaeological Museum of Florence that has allowed it to show the Chimaera of Arezzo at the Getty Villa in Malibu. The life-size sculpture of a triple-headed monster that is part lion, part fire-breathing goat and part serpent is a rare example of Etruscan bronzework from the fourth century B.C.

Dealers unveil their best to light up Winter Antiques Show