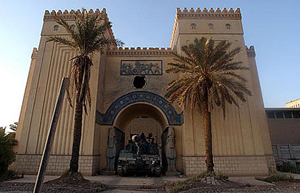 An American tank guards the entrance to the National Museum of Iraq in Baghdad in 2003. Image courtesy of Wikimedia Commons.

The museum was ransacked in the chaotic aftermath of Saddam Hussein’s ouster in April 2003, and only reopened to visitors early this year. Schmidt, who toured the museum with U.S. Ambassador Christopher Hill on Tuesday, said it was important for the world to see Iraq’s rich heritage and contribution to world culture.

“The history of the beginning of – literally – civilization is made right here and is preserved here in this museum,” Schmidt said at a ceremony attended by Iraqi officials.

“I can think of no better use of our time and our resources than to make the images and ideas from your civilization, from the very beginnings of time, available to billions of people worldwide,” he said.

Schmidt said Google has taken some 14,000 photographs of the museum and its artifacts, and the images will be available online in early 2010.

The antiquities in the museum’s vast storage vaults and artifacts from other sites across the country will also be photographed as they become available and then put on the internet, he said.

The museum was among many institutions, including universities, hospitals, libraries and art galleries, that were looted or set ablaze across Iraq in the days and weeks that followed Saddam’s ouster.

The museum holds artifacts from the Stone Age through the Babylonian, Assyrian and Islamic periods. The richness of its collection and its importance as a caretaker of the relics of early civilization triggered an outcry around the world.

U.S. troops, the sole power in the city at the time, were intensely criticized for not protecting the treasures at the museum and other cultural institutions like the national library and the Saddam Art Center, a museum of modern Iraqi art.

The national museum reopened in February after being closed for nearly six years. Its director, Amira Edan, said around 5,000 of the estimated 15,000 artifacts that were looted have been recovered so far.

Edan said Google’s project marks another step toward normalcy for the museum, and will provide a useful tool for scholars studying ancient Mesopotamia, but also “a kind of tourism journey” for people with a more casual interest in the region’s history.

Items looted from Saddam’s palaces turning up for sale