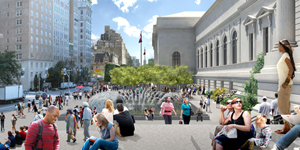 A view of the new plaza from the steps of the Fifth Avenue entrance. Construction should be completed in fall 2014. Image courtesy of the Metropolitan Museum of Art.

NEW YORK – Government leaders and museum officials formally broke ground for the new plaza and fountains at the Metropolitan Museum of Art on Monday.

Chairman Daniel Brodsky, Director and CEO Thomas P. Campbell, and President Emily K. Rafferty led ceremonies marking symbolically the start of work on the redesigned, four-block-long outdoor plaza that runs in front of the landmark Fifth Avenue facade, from 80th to 84th streets in Manhattan. Although construction commenced with excavation in October, the official groundbreaking originally scheduled for November was postponed in the wake of Hurricane Sandy.

Brodsky announced that the new outdoor plaza, which will open to the public in fall 2014, will be named “The David H. Koch Plaza.” Koch, a Museum Trustee, contributed the entire $65 million cost of the project.

“Six million pedestrians walk along these sidewalks every year. More than 2,000 museum staff and volunteers enter and exit every day. Thousands more ride by in buses and taxis. We believe all these constituencies will enjoy the new plaza for generations to come” said Brodsky, chairman of the museum’s board of trustees as well as chairman of the Board’s plaza design committee, in making the announcement. “It will give the Met a portal outside that is truly worthy of the masterpieces that grace our galleries inside.”

In addition to the plaza itself, the plan calls for the creation of new fountains to replace the deteriorating ones that have been in use since they were built in the 1970s along with the existing plaza. The fountains will be positioned closer to the museum’s front steps, improving access to its street-level public entrances at 81st and 83rd streets. The renovated plaza will also feature tree-shaded allées (in place of the current trees that have limited lifespans and low environmental benefits due to their inadequate planting conditions), permanent and temporary seating areas, and entirely new, energy-efficient and diffused nighttime lighting. Seasonal planting will be added along the base of the building to provide color and visual interest throughout the year. All of these new features respect and complement the architectural highlights of the landmark façade and the monumental, recently refurbished central stairs. OLIN, the landscape architecture, urban design, and planning firm, has been retained by the museum as the lead design consultant for the project.

Forty years have passed since the last renovation to the Metropolitan Museum’s Fifth Avenue plaza, when the design emphasis focused on accommodating vehicular access. Today, vehicular access on the plaza has become dangerous with the increase in pedestrian traffic, and some of the exterior design elements—including the fountains, trees, limited seating, and paving—have aged beyond repair. In particular, no long-term solution had been found for maintaining the fountains. The museum will leave untouched the most iconic element of the prior design, the monumental front steps at 82nd Street.

Since the museum’s founding in 1870, its rich architectural history has included major renovations, several of them including work on the Fifth Avenue plaza, with more than a dozen architectural firms over the years. The central museum façade on Fifth Avenue, known as the East Wing, was designed by Richard Morris Hunt and Richard Howland Hunt in 1896, and opened officially in 1902. The imposing and sculptural main entrance is the central portion of the composition and is flanked by low wings set back from the central façade. On each side of the original East Wing are newer wings designed by the firm of McKim, Mead and White. The grand stairs in front of the main entrance were designed by Roche Dinkeloo and Associates in 1968, and approved by the Landmarks Preservation Commission before construction. The new design by OLIN balances the grand stairs with a pair of fountains and bosques of London Plane trees, and two aerial hedges of Little Leaf Linden trees to its north and south.

Over the years, the front steps—which are the primary path for visitors into the museum—have become a popular area for museum visitors to sit and enjoy the outdoors.

In the new renovation plan, museum access will be improved by providing additional seating options to either side of the grand staircase and by replacing the long fountains currently impeding access to the doors at 81st and 83rd streets. The existing pavement along the façade of the museum will be removed and replaced with new North American granite paving to accommodate pedestrians along myriad routes to and from the doors and steps of the museum.

A pair of contemporary granite fountains, designed by the award-winning firm Fluidity Design Consultants, will be operational year-round, bracketing the grand stairs to create an energized connection between people sitting on the steps and those at the fountains, while punctuating the long plaza along Fifth Avenue with attractive water elements. Each fountain will be a quiet square form inset with a circular stone dome, with seating on long stone benches placed adjacent to the north and south edges of the pools. A circular basin will be subtracted from the rectilinear stone form to reveal a shallow stone dome occupying the basin’s negative space and generating a lens effect in the pool’s water volume. Evenly spaced nozzles, mounted around the edge of the circular basin, will orient glassy streams toward the center of the feature. The streams will be individually size-controlled and programmed to present a wide variety of programmable patterns. In winter, the water will be warmed by recycling steam to prevent freezing, thereby allowing for year-round use.

At the far north and south ends of the wings by McKim, Mead and White, where the architecture steps forward toward the street, two allées of large Little Leaf Linden trees will be planted, one on each margin of the sidewalk, continuing the shaded route along the Central Park wall and aligned to the rhythm of the windows along the museum’s façade facing Fifth Avenue. These trees will be pruned in the form of two aerial hedges, similar to the trees at the Palais Royal in Paris. Existing flagpoles will be relocated to rise above the trees at the ends of each allée, responding to the architectural arches of the façade. The presence of trees will create a pleasant experience within the streetscape, reinforcing the central plaza’s volume, yet hedged to ensure that the trees do not detract from the monumentality of the museum’s façade.

Within the central plaza, pairs of bosques of London Plane trees will be planted, flanking the 81st and 83rd Street entrances. By planting the bosques at a 45-degree angle to the street, the resulting lines of the tree trunks will guide pedestrians toward the doorways.

The London Plane trees will be pollarded, a historic pruning technique that allows for maximum sun penetration in the winter to warm the plaza and maximum shade in the summer for cooling. The pollarding also limits the height of the trees so they do not grow to block the view of the imposing façade. Along the base of the building on either side of the central stairway, ornamental beds of mixed shrubs and herbaceous flowers will be planted, referencing plantings seen in early- to mid-20th-century photographs and drawings, including original concepts developed by McKim Mead and White.

The museum expects that the plantings throughout the plaza will help to soften noise and better retain sounds within it.

In the new plan, the museum will plant approximately 100 new trees, more than doubling the former number. The 44 London Plane trees previously on the plaza were planted in inadequate soil conditions, which impeded their health and limited their environmental benefits. The museum transplanted as many trees as were deemed viable for relocation to other areas of the city chosen by the Department of Parks & Recreation. The new London Plane and linden trees will be planted in large tree pits that collect rainwater run-off and allow for healthy root growth, thereby maximizing their life spans and environmental benefits.

Beneath the bosques, shaded seating will be provided, using lightweight movable chairs that allow users to arrange them as they please. These casual seating areas, which will include 30 tables and 120 chairs, are similar in concept to others installed in public areas around the city, and will offer clear views of the plantings and water features of the plaza, with the activity of Fifth Avenue in the background. Additional benches adjacent to the allées of trees will provide further options for seating with shade provided by a series of cantilevered parasols.

At the public parking entry at 80th Street, both the booth along the access drive and the landscape plantings will be refurbished to make the entrance more welcoming as well as to provide better conditions for the Noguchi sculpture currently located on a plinth adjacent to the drive. The new booth will be covered in cast concrete siding with an environmentally sustainable sedum green roof, with trees and significant understory plantings added in order to blend it more harmoniously with the overall park landscape and minimize visibility from Fifth Avenue.

The evening ambiance of the museum plaza will be enhanced by a hierarchy of light on the landscape, water features, grand stairs, and façade. The façade is currently lit unevenly by light poles across the street from the building, on the east side of Fifth Avenue. Current lighting will be removed under the new plan. The new elements, which have been designed by the renowned lighting design practice L’Observatoire International, will form a composition to assist with wayfinding, provide visual interest for passers-by, and ensure safe and secure passage through the plaza at night.

Rather than lighting the façade with floodlights, which are energy-inefficient and tend to flatten the features of the architecture, the redesigned LED lighting, mounted on the museum’s façade and the plaza itself, will treat the building like a work of art, providing highlights that enhance the sculptural nature of the façade and its many beautiful design elements. Low-power lights in the museum’s large windows will cast a warm glow and make the Museum feel more approachable at night. This warm-colored lighting from the windows and on the façade will contrast with the cooler white lighting of the fountains and the tree canopy, adding a sense of depth to the façade and plaza. All of the lights will be on dimmers, which can be used to control the light levels and are much more energy-efficient than the current lighting design. The overall impact will be to diminish the intensity of the floodlights now installed along Fifth Avenue. 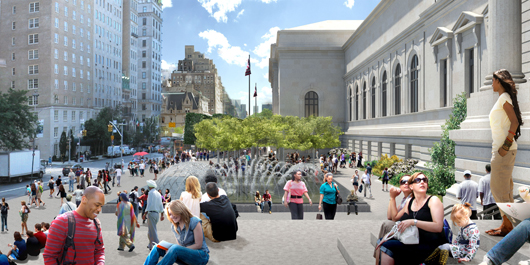 A view of the new plaza from the steps of the Fifth Avenue entrance. Construction should be completed in fall 2014. Image courtesy of the Metropolitan Museum of Art. 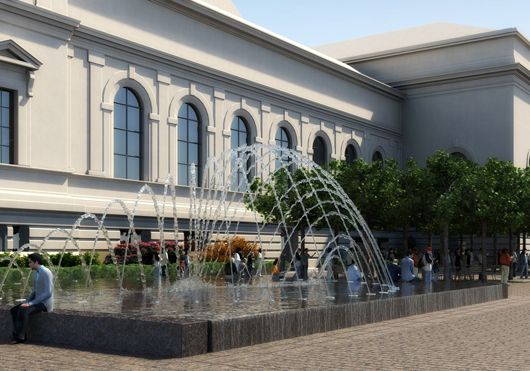 An artist’s rendering of one of the fountains at the David H. Koch Plaza. Image courtesy of the Metropolitan Museum of Art.