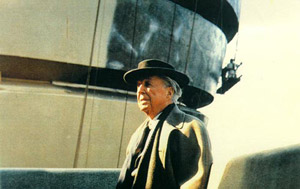 NEW YORK – Opening May 15 at the Solomon R. Guggenheim Museum, Frank Lloyd Wright: From Within Outward is an exhibition about the significance of Wright’s thinking about space and the large impact this has had on the organization of modern life. Wright’s visionary work shows how space, architectural form from within, is a key element to any architectural design. Relying on human scale and a predetermined unit system for the placement of every feature and detail, Wright’s spatial organisms exhibit the eloquence of highly intuitive, yet surprisingly complex architectural forms.

Unlike many of his contemporaries, Wright designed architecture not merely as a form to follow function; to him form and function are one, and the Solomon R. Guggenheim Museum is a supreme example of this. Over the course of his 70-year long career, Wright developed a spatial language in which form outside became an integral expression of the spaces within a building.

In Wright’s works, walls can define and differentiate, but do not confine or obliterate space. He shaped continuous spatial experiences that freed up space and set an example of inspiring architecture for generations to come.

The more than 80 projects in Frank Lloyd Wright: From Within Outward-ranging from privately commissioned homes and office, civic, and government buildings to religious and performance spaces as well as unrealized urban sites-accentuate Wright’s oeuvre as an architecture that encourages social interaction and integration with the natural world.

This unique presentation of Wright’s work, culminating with the design for Solomon R. Guggenheim Museum, which opened its doors to the public in 1959, aims to inspire visitors to think about architecture as a vital extension of daily life. Wright’s spaces, designed from within outward, showcase the positive effects that architecture can exert on the human psyche.

Frank Lloyd Wright: From Within Outward is presented through a range of media, including over 200 original drawings, historic and newly commissioned models, historic and contemporary photographs; as well as through related books, periodicals, and correspondence. In addition, newly created video and digital renderings will shed light on Wright’s designs. Numerous works from the archives of both the Frank Lloyd Wright Foundation and the Solomon R. Guggenheim Museum will be on view to the public for the first time and will illustrates how Wright’s architecture is as an expression of life.

Frank Lloyd Wright: From Within Outward will run from May 15, 2009 through August 23, 2009. For additional information, visit www.guggenheim.org.