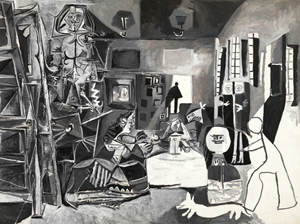 NEW YORK — “Picasso Black and White,” the first major exhibition to focus on the artist’s lifelong exploration of a black-and-white palette, will be presented at the Guggenheim Museum from Oct. 5 to Jan. 23.

The exhibition features 118 paintings, sculptures, and works on paper from 1904 to 1971, and will offer new and striking insights into Picasso’s vision and working methods. This chronological presentation includes significant loans—many of which have not been exhibited or published before—drawn from museum, private and public collections across Europe and the United States, including numerous works from the Picasso family.

Following its New York presentation, a major part of the exhibition will travel to the Museum of Fine Arts, Houston, where it will be on view from Feb. 24 to May 27, 2013.

“Picasso Black and White” is organized by Carmen Giménez, Stephen and Nan Swid Curator of Twentieth-Century Art, Solomon R. Guggenheim Museum, with assistance from Karole Vail, Associate Curator, Solomon R. Guggenheim Museum. The exhibition is accompanied by a fully illustrated catalog with an essay by Giménez as well as essays by Dore Ashton, Olivier Berggruen and Richard Shiff.

Few artists have exerted as considerable an influence over subsequent generations as Pablo Picasso (1881–1973). While his work is often seen through the lens of his diverse style and subjects, the recurrent motif of black, white, and gray is frequently overlooked. “Picasso Black and White” will demonstrate how the artist was continuously investigating, inventing, and drawing in somber and austere monochromatic tones throughout his career.

“Picasso Black and White” presents a unique and illuminating perspective on a lesser-known but fascinating aspect of his formidable body of work. Picasso’s Blue and Rose periods include, in effect, works painted in delicate black, white and gray soft light shadings, and his pioneering investigations into Cubism are condensed to geometric and deconstructed components of austere gray tones. Likewise, his neoclassical figure paintings allude to the cool tonalities of Greek and Roman sculpture as well as to European painting and drawing for which Picasso always had a strong affinity, and his explorations into Surrealism comprise sensual works composed of a panoply of grays. The forceful and somber scenes depicting the atrocities of war, the allegorical still lifes and the vivid interpretations of art-historical masterpieces display a striking intensity through such minimal tones. Finally, the highly sexualized works of his twilight years feature these black and white colors, which are at times tender, but always vigorous, and convey the direct mode of spontaneous and raw expression that is so typical of Picasso’s output.

According to Giménez, the graphic quality of these distinctive works harks back to the spare paintings of Paleolithic artists who developed a primal visual language using charcoal and simple mineral pigments. But in adopting this restricted palette, Picasso was also faithful to a centuries-long Spanish tradition, following in the footsteps of earlier masters whose use of the color black was predominant in their canvases—artists such as El Greco, Diego Velázquez, Francisco de Zurbarán, Jusepe de Ribera and Francisco de Goya (who made black paintings in his old age, as did Picasso until the very end of his life).

Giménez also explains that Picasso made highly effective use of black, white, and gray tones in a nod to monochromatic grisaille painting, evoking textural and sculptural qualities. Reported to have said that color “weakens,” Picasso purged and isolated color from his work to highlight its formal structure and assert its autonomy.

“Picasso Black and White” will be accompanied by a full roster of public programs. Details may be found at guggenheim.org/publicprograms. 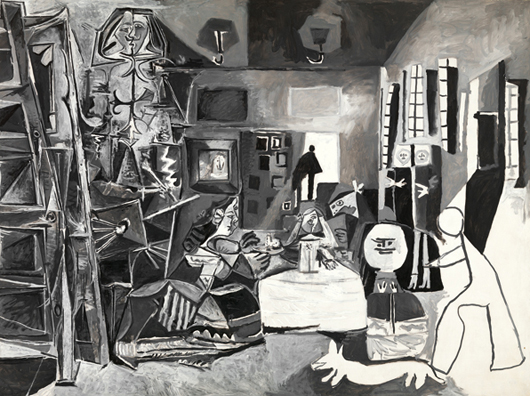