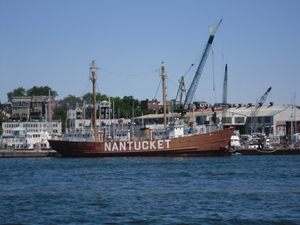 The decommissioned lightship Nantucket in the port of Boston in August. This file is licensed under the Creative Commons Attribution-Share Alike 3.0 Unported license.

BOSTON (AP) – Robert Mannino apologized as he lowered an ordinary wooden ladder instead of a gangplank for visitors to come aboard the 149-foot Nantucket Lightship/LV-112.

For 39 years, this lightship was ambassador and traffic cop, the first to greet trans-Atlantic travelers on the world’s great ocean liners, and a warning for ships approaching the treacherous Nantucket Shoals.

Now, Mannino, president of the U.S. Lightship Museum Society, wants to renovate the ship and open it as a Boston Harbor maritime museum. It is currently berthed at the Boston Harbor Shipyard and Marina, but will be moved to a more accessible location nearby and open for tours as of July 14.

The LV-112 is the largest and best-known of the 179 lightships that marked hazards in U.S. waters between 1820 and 1982. Only 17 of those vessels survive, nearly half in private ownership. The LV-112 was recently designated a National Historic Landmark, as well as one of only 20 historically and/or architecturally significant buildings or sites selected as National Treasures by the National Trust for Historic Preservation.

Two years ago, the ship itself had to be rescued from Oyster Bay on Long Island, where it had been neglected for eight years after a failed effort to turn it into a museum. Mannino and his nonprofit group raised $230,000 to move it to Boston, clean the bottom of more than 4 tons of barnacles and marine growth, repaint it and make it seaworthy.

The vessel is tied securely to the dock but the smell of fuel oil, combined with a rolling swell from a passing vessel was enough to induce queasiness. The officer’s quarters, with the leather bench built into the arc of the stern, and its snug, white bunk rooms, suddenly went from cozy to claustrophobic.

But Boston Harbor is nothing like Nantucket Shoals where this lightship and its crew of 20 stood guard for nearly 40 years. Held in place by a 4-ton mushroom anchor, more than 100 miles from shore, the lightship endured thick fogs and storms with ferocious seas. Its mariners were in isolation for weeks at a time.

“They talk about the perfect storm. You all have three of them every year,” remembered Peter Brunk of Portsmouth, Va., who served as captain of the LV-112 for a year and half from 1970 to 1971.

Nantucket Shoals is an underwater ridge of migrating sand and gravel that extends 24 miles to the east and 40 miles to the southeast of the island. Depths can be as shallow as 3 feet and currents can be strong at 3 to 5 knots. Tidal flows turn sudden corners while running around the trapezoidal shoals, creating a circular current that can turn an anchored vessel sideways to oncoming waves, initiating a nausea-inducing pendulum motion.

“That was a miserable station. The tide runs terrible and you have certain winds out there, put you in the trough,” said Richard Arnold, 82, of Gloucester, who served 20 years in the Coast Guard, including two years on the Nantucket. “She gets in that tide, and you’d be in the trough _ oh my God, the rocking and a-rolling.”

Every hour the current would come from a different direction and inevitably put the boat sideways to oncoming waves, said Brunk. The wind had to be blowing 37 mph or greater before the ship could best the current, swing around on the anchor and face into the waves.

“In the trough, that’s when you find out whether you had sailors or wimps,” Brunk said.

On bad sea days, Mannino said, crewmen would wear coffee cans tied around their neck in which to vomit while they continued working. He’s been in contact with many who served on the Nantucket, and Mannino said there are some who told him jail time would be better than lightship service.

“I thought I was a sailor, being a fisherman. That all changed when I went aboard the lightship,” Arnold said.

Like many who served on the lightship, Arnold’s ears still ring from the foghorn. The ship’s rotating light beam could go 23 miles out to the horizon but it couldn’t penetrate fog. The foghorn’s reach, with a blast as loud as a jetliner at takeoff, was 18 miles. The thick fog conditions nearly half the year meant crewmen had plenty of time to grow to hate the foghorn.

“You could be lying in your bunk and all of a sudden it started. The air compressor vibration woke you up and here you go, the foghorn,” Arnold said. “I suppose you do get used to it. Try to ignore it.”

But while the seamen might complain about the foghorn, they never complained about the seaworthiness of the ship itself.

Built in 1936 for $301,000 as reparation from the British government after its predecessor was rammed by a British ocean liner, the lightship had thick battleship-grade steel, a double hull, and 43 watertight compartments.

“She’s taken a beating over the years,” Arnold said.

No harder a beating than Hurricane Edna dished out in 1954 with 120 mph winds and 70-foot seas.

As Edna came up the coast, weather forecasts changed from gale to hurricane warnings and the men put out lifelines—ropes from bow to stern—to give themselves one more thing to grab.

Although their anemometer broke at 115 mph, the ship was riding fine through most of the storm, Arnold said.

Then, looking out of one of the porthole windows on the bridge, Arnold could see a huge wave forming in the distance.

“When I realized what was going to happen, I turned around and yelled to the chief who was in the captain’s cabin,” Arnold recalled. By the time the chief walked the short distance from the cabin to the bridge, the wave had hit, rolling right over them.

Four portholes on the port side of the bridge were blown inward like cannon shot. The brass ship’s wheel disintegrated, and instruments and controls sparked and caught fire.

“If I’d been standing on that side, they would have taken my head off,” Arnold said. Water was pouring into the bridge and down the stairs into the decks below. Seawater coursed down the smokestacks putting out the fires in the steam boilers, leaving the ship without power. The ship’s rudder also broke.

The force of the blow strained the anchor chain. Even links as thick as a man’s wrist have a breaking point and the chain parted from the anchor.

Adrift without power, the crew’s only hope was to secure the auxiliary anchor. Fortunately, a hurricane-hunting plane burst through the clouds above them and they were able to radio a mayday message and get their position. A quick look at the charts confirmed they were in water shallow enough to drop the anchor.

The problem was that someone had to go out on the bow into winds higher than 100 mph and risk being swept overboard to release the backup anchor. Arnold was one of three who went onto the pitching deck, bent over double against the wind.

“You’re working on adrenaline. You know what you got to do and you do it,” he said.

Once they got the spare anchor over, the ship swung into the sea and rode it out.

“It was rough, it was miserable, but it calmed things down a lot,” he said about the anchor.

But life on the lightship wasn’t all bad weather and misery. There could be calm days with sun. Regulations were more relaxed on a lightship than other ships, and the crew could trade with fishermen, even Russian trawlers for fresh fish. And relief crews brought enough movies to show two a night, Brunk said.

Sometimes there were moments of surreal magic.

Surprise tropical fish would show up, transported north in the warm Gulf Stream waters. One day, a U.S. Navy sub decided to use Brunk’s lightship for torpedo target practice.

Anything unexplained was blamed on the ghost of Edwin Ramsdell, a journalist who died when his plane crashed near the lightship in 1936.

Then there were the ocean liners. 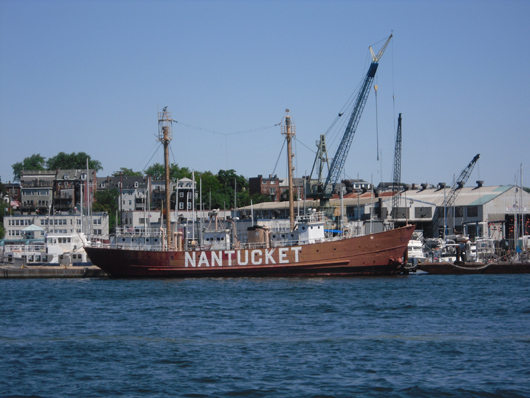 The decommissioned lightship Nantucket in the port of Boston in August. This file is licensed under the Creative Commons Attribution-Share Alike 3.0 Unported license.

Iconic New England lighthouses are back in the spotlight