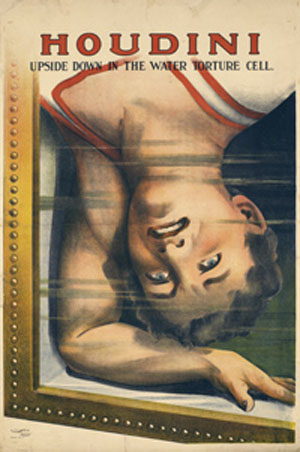 Houdini Upside Down in the Water Torture Cell, circa 1913 lithograph, approx. 24 x 16 in. (61 x 40.6 cm), The New York Public Library for the Performing Arts, Billy Rose Theatre Collection, from the exhibition Houdini: Art and Magic at The Jewish Museum, New York.

Houdini: Art and Magic, which opens Oct. 29, 2010 at The Jewish Museum, tells the story of an impoverished son of Jewish immigrants who harnessed the power of the mass media, and the emerging technologies of film and photography, to become one of the 20th century’s most famous performers.

The show is beautifully installed in galleries that feature the semi-dark theatrical lighting and spotlights of the vaudeville halls where Houdini got his start as a stage magician before turning to outdoor escape spectacles.

Scattered amid the historic photographs, art nouveau-era posters and archival films are more than two dozen recent works of art by such well-known artists as Matthew Barney, Vik Muniz and Raymond Pettibon that attest to Houdini’s continuing influence as the consummate illusionist. The museum also displays some of his magic props, including handcuffs, shackles, a straitjacket, a milk can and a packing trunk that were featured in various escape acts.

Though he eventually became an international celebrity, Houdini was from the most modest of circumstances. He was born Erik Weisz in 1874 in Budapest, the son of a rabbi who immigrated to Wisconsin when Erik was a boy. When he was 12, he ran away from home to join the circus, but eventually returned home to help support the family. Tellingly, one of his earliest jobs was as an apprentice to a locksmith.

From an early age, he trained as a runner, swimmer and boxer, developing the physical strength and stamina that let him perform superhuman feats such as escaping, while handcuffed, from a padlocked crate thrown into an icy river.

Only after his father died in 1892 did the teenager launch his career as an entertainer, changing his name to Houdini in honor of the French magician Jean-Eugene Robert-Houdin and performing in freak shows and traveling circuses.

Houdini’s big break came in 1899, when he was discovered by the vaudeville impresario Martin Beck and started touring theaters across America and Europe.

Later in life, Houdini sought to debunk the fake spiritualists and mediums who claimed to be able to communicate with the dead. He also published books explaining some of the tricks of his trade, although the exhibition does not reveal any of those secrets.

Houdini died on Halloween 1926 of peritonitis – not trying to escape from a water-filled cell as depicted in the 1953 movie of his life starring Tony Curtis – and was buried in a Jewish cemetery in Queens, New York, where fans still make a pilgrimage on the anniversary of his death.

Curator Brooke Kamin Rapaport suggests that part of Houdini’s appeal lay in the fact that his working-class audiences, many of whom came to America in search of political or religious freedom, identified with Houdini’s immigrant background. His ability to emerge unscathed from handcuffs, chains and packing crates became an inspiring symbol of their own quest for freedom.

Houdini – who often closed his performances by asking “Will wonders never cease? – plays a central role in E.L. Doctorow’s novel Ragtime and in Michael Chabon’s The Amazing Adventures of Kavalier & Clay. The magician David Blaine reveres him, and he is mythologized by the American artist Deborah Oropallo in her oil painting Escape Artist.

The show closes in New York on March 27, 2011, after which it travels to Los Angeles, San Francisco and Madison, Wisconsin.