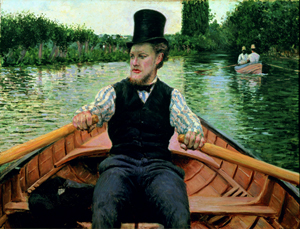 BROOKLYN, N.Y. (ACNI) – It has been 30 years since New York last played host to the stunning and magical works of Gustave Caillebotte (French, 1848-1894). Although best known for his depiction of urban workers and the daily life of Parisians in the modern city and branded by critics of his day as “rebellious” and “vulgar,” Caillebotte was more than just an “urban Impressionist.” His unique style and versatility are amply showcased in an exhibition of 40 Caillebotte works running through July 5 at the Brooklyn Museum, titled Impressionistic Paintings from Paris to the Sea.

Caillebotte’s paintings show true-to-life expressions ranging from his affluent upbringing to his love for yachting and river sporting activities. With outdoor scenes from fabulous apartments overlooking Paris, elegant gardens of Petit Gennevilliers, the riverbank of Yerres and shores of Normandy, he documents his passions on canvas.

I had never seen a painting by Gustave Caillebotte and was particularly fascinated by Oarsman in a Top Hat, which drew me in because it reminded me of my first love. It’s a gorgeous painting, colorful and serene. The observer feels as though they are with the subject in his beautifully crafted boat, sailing down the river on a Sunday.

Many of Caillebotte’s paintings are like that. His scenes are so vivid and enchanting, they compel the viewer to keep looking, imagining the lives of the characters from the eye of a distant voyeur. The Floor Scrapers is another example of this – two workers busily shaving the buckling boards of a freshly finished hardwood floor. This painting reveals Caillebotte’s early exploration of light reflecting off water. For many years, The Floor Scrapers was his only painting featured in a museum; his others were owned by private collectors and, after his death, donated to the French State. 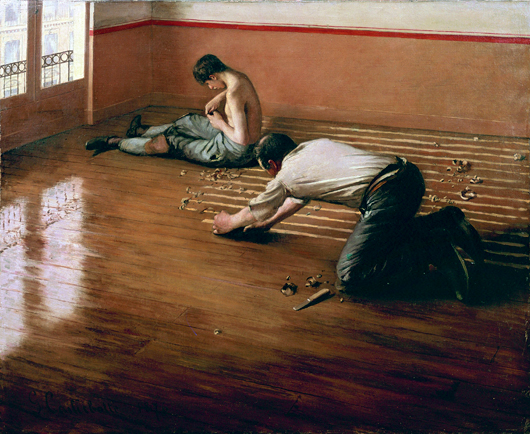 I can’t help wondering why Caillebotte, having been such a talented and innovative artist, wasn’t as well known in his day as his Impressionist contemporaries. Coming from a prosperous, upper-class family, Caillebotte (also a licensed lawyer and engineer) did not have to make a living from his art and had no desire to sell his work for financial stability. He was, in fact, also a collector and patron of the arts, buying paintings from his friends Monet, Degas, and Renoir, enabling them to continue painting. In some cases, he paid the rent at their studios.
. 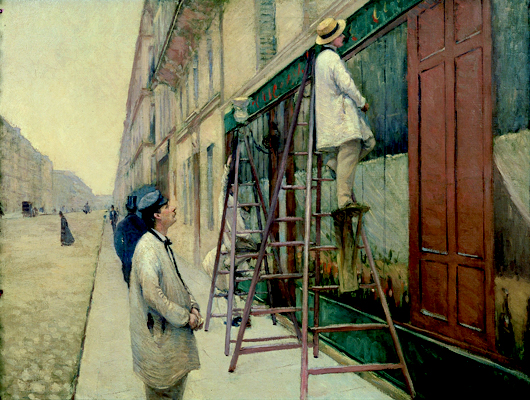 
Caillebotte was different from his contemporaries in other ways as well. His paintings were more realistic than those of his peers, and he experimented with distortions of scale, depth, and perspective as seen in The House Painters, with its skewed lines down city avenues. Skiffs on the Yerres and Oarsmen Rowing on the Yerres, which in his time was viewed as bizarre and unusual, emphasizes his daring, innovative personality. 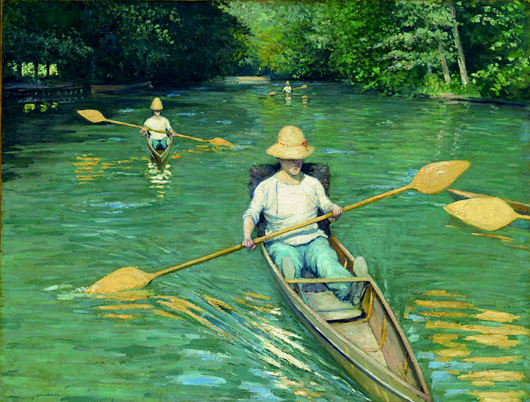 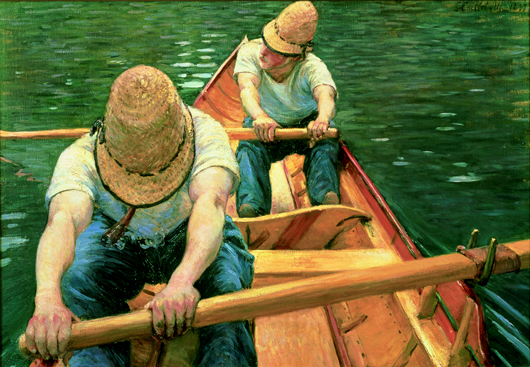 
Roses in the Garden at Petit Gennevillers shows his companion, Charlotte Berthier, tending to her garden roses while dressed to the nines – as was the custom of fashionable, affluent women of that time – being looked upon by her tiny dog, who makes an appearance in a few of Caillebotte’s paintings. 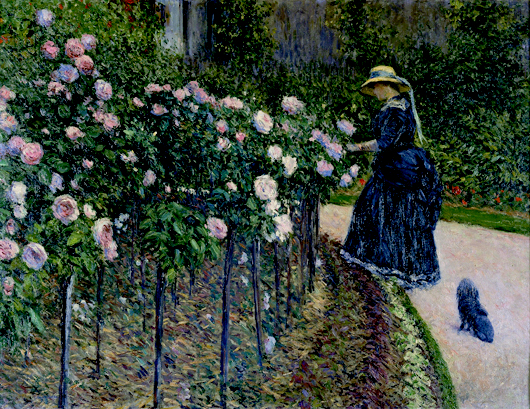 Also on display in the Brooklyn Museum exhibition are Caillebotte’s carved-wood models of yachts and sailboats, revealing his great love of maritime activities, a pursuit in which he dedicated his life. The photography featured along with his sketches and drawings of boats further documents Caillebotte’s versatility.

Located on the 5th floor of the Brooklyn Museum in the Beatrice and Samuel A. Seaver Gallery, the Caillebotte exhibit runs through July 5. Be sure to check it out this weekend before Gustave sails back to France.

A perfect outing would be a trip to the museum and then a leisurely picnic lunch in the beautiful Brooklyn Botanic Garden located right next door (their rose garden is now open). A Brooklyn Art & Garden ticket is available for admission to both on the same day through Brooklyn Museum’s website: http://brooklynmuseum.org/visit. Art & Garden Tours are given Wednesday – Sunday by scheduling via email: grouptours@brooklynmuseum.org.

The Brooklyn Museum offers many other exciting featured exhibits and house collections as well.
To view all current exhibitions and learn more about the museum, log on to http://www.brooklynmuseum.org/exhibitions/.

The Brooklyn Museum is just a short subway ride from Manhattan on the 2/3 express train to the Eastern Parkway stop directly outside the museum’s doors. Its address is 200 Eastern Parkway, Brooklyn, N.Y. 11238-6052.