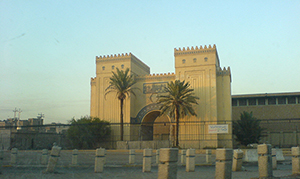 The National Museum of Iraq in Baghdad. Image courtesy of Wikimedia Commons.

The newly renovated halls feature more than 500 artifacts that mainly date back to the Hellenistic period (312-139 B.C.), some of which were retrieved and renovated after the looting of the museum following the 2003 U.S.-led invasion, said Qais Rashid, who head the state-run Museum Department.

The museum chronicles some 7,000 years of Mesopotamian civilization, including the ancient Babylonians, Sumerians and Assyrians, but remains closed to the general public out of security fears.

Iraq is grappling with a re-invigorated Sunni insurgency that has seized large swaths of the country’s north and west since June. The Islamic militants leading the insurgency have destroyed a number of historical and religious monuments they view as un-Islamic or idolatrous.

But the museum inauguration in Baghdad was packed with visitors eager to glimpse relics from happier times.

Rashid said the most important artifacts are the statue of King Sanatruq I, who reigned from around A.D 140 to 180. It shows him wearing a robe and holding a palm leaf in his left hand while extending his right hand in greeting. An eagle on his head extending its wings symbolizes the king’s victories.

Also on display was a headless statue of Hercules, the ancient Greek hero famed for his strength, showing him holding a truncheon and a lion skin.

The statues come from the UNESCO World Heritage Site Hatra, which is thought to have been built in the third or second century B.C. by the Seleucid Empire. It flourished during the first and second centuries as a religious and trading center.

Hatra is about 80 kilometers (50 miles) south of Iraq’s second largest city Mosul, which was captured by the extremist Islamic State group and allied militants in June.

The al-Qaida breakaway group has seized large parts of Iraq and neighboring Syria, declaring a self-styled Islamic caliphate and imposing a strict form of Shariah law in the areas under its control, including a prohibition on depictions of the human form.

Tourism Minister Liwa Smaysin warned that hundreds of Iraq’s archaeological sites located in militant-held areas are under threat of being demolished, including a number of old mosques and shrines, saying Iraq was working with UNESCO to try to protect them.

Looters burst into the Iraqi National Museum the day after Baghdad fell to U.S. troops in April 2003, making off with scores of priceless artifacts and leaving the floor littered with shattered pottery.

The U.S. was widely criticized at the time for failing to protect the site. 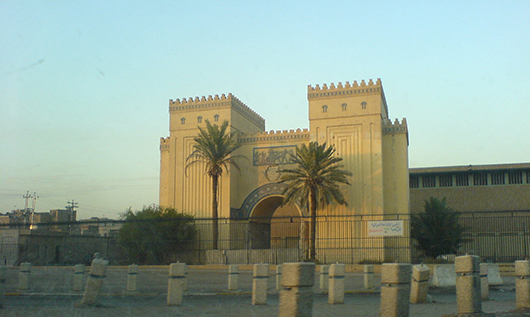 The National Museum of Iraq in Baghdad. Image courtesy of Wikimedia Commons.