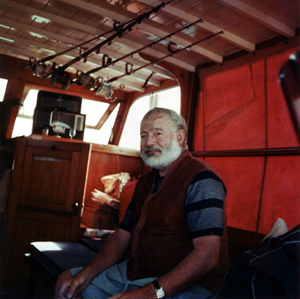 Ernest Hemingway in the cabin of his boat Pilar, off the coast of Cuba, circa 1950. Ernest Hemingway Photograph collection, John F. Kennedy Presidential Library and Museum, Boston.

WASHINGTON (AP) – While most Americans have never seen Ernest Hemingway’s home in Cuba where he wrote some of his most famous books, a set of 2,000 recently digitized records delivered to the United States will give scholars and the public a fuller view of the Nobel Prize-winning novelist’s life.

A private U.S. foundation is working with Cuba to preserve more of Hemingway’s papers, books and belongings that have been kept at his home near Havana since he died in 1961. On Monday at the U.S. Capitol, Rep. James McGovern and the Boston-based Finca Vigia Foundation announced that 2,000 digital copies of Hemingway papers and materials will be transferred to Boston’s John F. Kennedy Library.

This is the first time anyone in the U.S. has been able to examine these items from the writer’s Cuban estate, Finca Vigia. The records include passports showing Hemingway’s travels and letters commenting on such works as his 1954 Nobel Prize-winning The Old Man and the Sea. An earlier digitization effort that opened 3,000 Hemingway files in 2008 uncovered fragments of manuscripts, including an alternate ending to For Whom the Bell Tolls and corrected proofs of The Old Man and the Sea.

The newest trove includes some of Hemingway’s personal correspondence, including a letter that literary critic Malcolm Cowley wrote to Hemingway about the award-winning book.

“The Old Man and the Sea is pretty marvelous,” Cowley wrote. “The old man is marvelous, the sea is, too, and so is the fish.”

American poet and writer Archibald MacLeish wrote a telegram in 1940 after the publication of For Whom the Bell Tolls, praising Hemingway’s work.

“The word great had stopped meaning anything in this language until your book,” MacLeish wrote. “You have given it all its meaning back. I’m proud to have shared any part of your sky.”

To the actress Ingrid Bergman, Hemingway typed a confidential note in 1941 saying he wanted her to play a lead role opposite Gary Cooper in a film of For Whom the Bell Tolls. “There is no one that I would rather see do it, and I have consistently refused all suggestions that I endorse other people for the role,” he wrote in the note and kept a carbon copy.

Jenny Phillips, the granddaughter of Hemingway’s editor, Maxwell Perkins, founded the Finca Vigia Foundation in 2004 after a visit to Havana. She saw Hemingway’s home falling into disrepair and became aware of the many records kept in a damp basement at the estate. She worked to get permission from the U.S. Treasury and State departments to send conservators and archivists to Cuba to help save the literary records and to help train Cuban archivists.

The newly digitized files include handwritten letters to his wife, Mary, bar bills, grocery lists, notations of hurricane sightings and handwritten notebooks full of weather observations. It does not include any manuscripts.

“This is the flotsam and jetsam of a writer’s life—it’s his life and his work,” Phillips said. “All these bits and pieces get assembled in a big puzzle.”

Restoration work continues at Hemingway’s Finca Vigia estate in Cuba. A new building is being constructed with library-quality atmospheric controls to house the writer’s books and original records.

Sandra Spanier, a Hemingway researcher and English professor at Penn State, has reviewed the latest release of documents and said they will help biographers and historians create a fuller portrait of Hemingway.

“While there’s no one single bombshell document, no long-lost novel to be discovered here, these new details add texture and nuance to our understanding of the man,” she said. “Hemingway was an eyewitness to 20th century history. His work both reflected his times and, in a way, shaped his times.”

Documents found in Cuba reveal more about Hemingway’s role in World War II. He had details of daily troop movements, labeled secret, from his days as a war correspondent during the Battle of the Bulge. Also, while in Cuba in 1942 and 1943, he was authorized by the U.S. embassy in Havana to patrol the north coast of Cuba in his fishing boat, in search of German submarines.

Phillips said scholars had been trying for years to see what was left behind in Cuba, where Hemingway lived from 1939 to 1960. He lived longer in Cuba than in Key West, Florida, or a home he kept in Idaho. Phillips spent time negotiating on both the Cuban and American sides to gain access to the collection.

The Kennedy Library holds a large Hemingway collection of more than 100,000 pages of writings and 10,000 photographs because Jacqueline Kennedy helped arrange a place for the items. Hemingway’s wife, Mary Welsh Hemingway, returned to Cuba in 1961, after the writer’s death, hoping to retrieve his belongings. Because of Fidel Castro’s rise to power, President John F. Kennedy helped arrange for her visit to take Hemingway’s possessions back to the United States.

Mary Hemingway took a boatload of materials back to the U.S., burned some records deemed sensitive and left thousands of other volumes and documents at the home near Havana.

McGovern, an advocate of normalizing relations between the U.S. and Cuba, said the collaboration over a shared interest in Hemingway could help ease tensions between the two countries.

“Art, literature and culture can bring people together,” McGovern said. “This has gone on for over a decade. This is a success story. This shows we can actually engage in successful collaborations with the Cubans.” 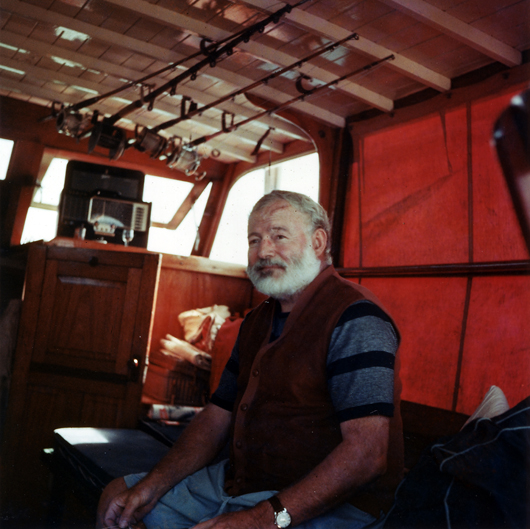 Ernest Hemingway in the cabin of his boat Pilar, off the coast of Cuba, circa 1950. Ernest Hemingway Photograph collection, John F. Kennedy Presidential Library and Museum, Boston.

Punk gets pretty in Met museum exhibition
Scroll to top