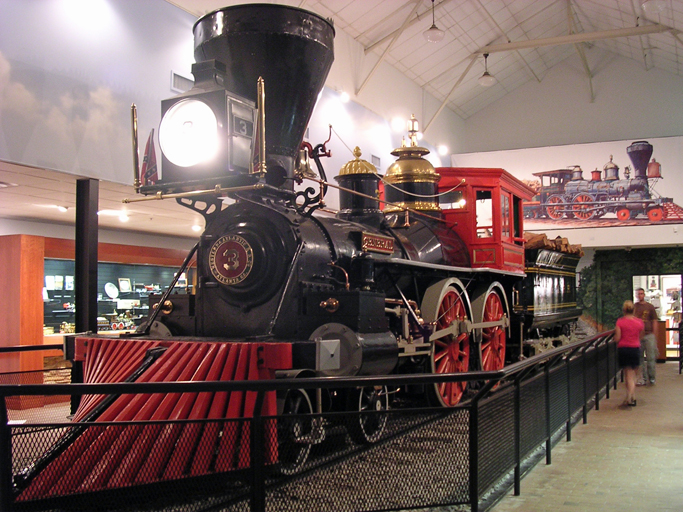 KENNESAW, Ga. (AP) – City officials are trying to find a way to bring a runaway train back to Kennesaw to live with its sister train.

Kennesaw’s Southern Museum of Civil War and Locomotive History owns The General, one of the two main engines involved in what’s been named the Great Locomotive Chase.

The General is owned by the state and is on permanent loan to the city.

Atlanta houses the second, The Texas, at the Cyclorama in Grant Park. This summer, the Cyclorama, which features the world’s largest oil painting depicting the Battle of Atlanta, painted in 1885 and 1886 by artists from Germany, will move to the Atlanta History Museum in Buckhead. The train is set to move there also.

However, Kennesaw Mayor Mark Mathews and state Rep. Earl Ehrhart (R-Powder Springs) are advocating for the train to move to Kennesaw’s Southern Museum.

“It just makes all kinds of sense in the world to be housed somewhere in Cobb [County]. This is where the historical event actually took place, and I know that it would be well cared for by that museum for sure,” Ehrhart said.

The Great Locomotive Chase, as it was named after a Disney movie was made in 1956 depicting the historic event, happened 153 years ago. On April 12, 1862, a crew of Union and civilian men led by James Andrew, known as Andrews’ Raiders, stole The General while it was stopped in Kennesaw, which was then known as Big Shanty, said Steve Stancil, the state property officer for the State Properties Commission.

“The Yankees jumped on the train and took off toward Chattanooga with it,” Stancil said. “Of course, their idea was to knock down the telegraph lines and burn bridges or do anything they could to disrupt the rail line.”

Confederates soon embarked on a miles-long chase after The General, some on foot, others in carts or other modes of transportation.

Eventually, the Confederates boarded The Texas, and after a nearly 90-mile chase, caught up The General just before reaching Chattanooga. Some of the Union soldiers caught were later hanged, according to a description of the chase from The Southern Museum. Other Union soldiers involved in the event were given Medals of Honor posthumously.

Ehrhart said he thinks the history shows clearly where the train should reside.

“Those Yankees are trying to steal our train again, Ehrhart said.

Mathews said the plan to ask for The Texas to move to Kennesaw has been in the back of his mind for a while.

“We talked about that for years and years, and of course, it all kind of got energized when they announced the Cyclorama was moving,” Mathews said.

Hardwick said The Texas has been in Grant Park since 1911.

Reed made the following statement when the move was announced: “Moving the Cyclorama to the Atlanta History Center will allow more people access to the painting, and in a context that contributes to viewers’ understanding and appreciation of the artwork.”

Mathews said he thinks The General, already located in The Southern Museum, needs its “perfect match.”

“A lot of train enthusiasts come through the museum, and we’ve had a few train-centered events that have been well-attended,” Mathews said. “We definitely would like it in Kennesaw. It sure doesn’t belong in Buckhead.”

The method for determining where the train will end up is still undecided, Stancil said.

Lawyers in his office, the State Properties Commission, will try to find documents that point to who owns the train, Stancil said. However, that search has been troublesome, prompting Stancil to bring the issue to Attorney General Sam Olens for help.

“I’ve taken this to the attorney general’s office. I asked my in-house attorneys to go talk with them and start researching and see what they could find on it so we can try to get an idea of, legally, who (owns it) and where it belongs,” Stancil said.

Olens confirmed Friday that his office was working on the issue, but wouldn’t comment any further.

Ehrhart said he has faith that Olens, a former chairman of the Cobb Board of Commissioners, will take the county’s history into account if he ends up making the decision of where the train ends up.

“My inclination is that this is a state property, and I know it’s probably going to be kicked up to the attorney general, who, quite candidly, is a Cobb County guy, so I hope that he would, obviously, follow the law, but at least he’ll have a perspective on the history of Cobb County,” Ehrhart said. “I want the state to say it’s state property and then choose wherever they want it to go, whether it’s the Atlanta History Museum or the City of Kennesaw.”

However, Ehrhart said if the state can’t or won’t make a decision on the train, he’s ready to introduce legislation in the next session to demand the train move to Kennesaw.

“If we have to do it legislatively, then I’m more than happy to get the Cobb (delegation) to go to bat for that historical monument to be where it belongs,” Ehrhart said.

The Texas has been a popular historical item. In 2010, Marietta Mayor Steve Tumlin made a push to get the train to Marietta.

“I said that back then because I knew how much we were going to celebrate the 150th anniversary of the Civil War (in the summer of 2014), and I thought it would be good to have it for that,” Tumlin said.

Now, Tumlin said he’s happy to leave it to Kennesaw to fight Atlanta.

“Kennesaw sure is a natural place to have it. We’ll cheer for our brothers up in Kennesaw,” Tumlin said.

Ehrhart said he’s glad to take up the fight.

“We’re going to win this war. The Yankees won the last,” Ehrhart said.