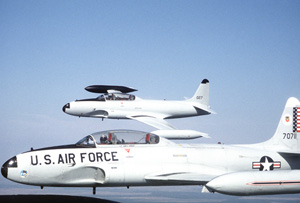 BOWLING GREEN, Ky. (AP) – When the Lockheed T-33 Shooting Star aircraft arrived in Bowling Green a few weeks ago, it was in pieces. Now Aviation Heritage Park workers are putting those pieces back together and hoping to make the plane look as good as new.

Arnie Franklin, president of the Aviation Heritage Park, explained some of the challenges of restoring an old aircraft on a Monday afternoon as he, Jerry Roark and Joe Leudenburg worked on the plane in a hangar at the Bowling Green-Warren County Regional Airport.

The T-33 was taken apart to make the trip to Bowling Green from Ypsilanti, Mich., where it had been on display at the Yankee Air Museum. Before that, the aircraft was stripped down and “de-militarized,” Franklin said, meaning the engine, instruments and various other parts were removed.

“In the process of taking it apart, you tear up some things,” Franklin said. The job now is to put it back together and make repairs where needed, which requires many steps and people.

Workers are currently finishing the reattachment of wings. After that, Franklin said Brian Peters of Western Kentucky Powder Coating will perform soda blasting on the plane. This strips all the paint off the plane and cleans it down to the bare metal without causing damage.

Once that is done, Franklin said the plane gets a good once-over to find any other repairs that need to be made. One challenge in working on an older plane is that if something is broken during restoration, finding a replacement part can be difficult, if not impossible.

Franklin said painting is the next step in the restoration process. PPG Aerospace provided high-quality paint for the first two Aviation Heritage Park aircraft and organizers are hoping it will help again. The paint is the type used on the Blue Angels jets as well as Air Force One.

On-Site Electrostatic Painting out of Louisville will then apply the paint using electrostatic force. Franklin explained that the plane will be given a negative charge while the paint will have a positive charge. When the paint is sprayed, it quickly adheres to the aircraft and goes into tiny spaces and around corners. The charged paint also doesn’t overspray.

Franklin said they are researching how the plane would have looked when it was first built and used as trainer aircraft. The heritage park will try to restore it to its original condition.

While many places that restore and display military aircraft only worry about the outside of the plane, Franklin said they restore the cockpit as well. Recreating the cockpit of a T-33 isn’t easy, but Franklin said Roark is working on it now and often finds needed items on eBay.

Although most T-33s are either in a military junkyard or on display somewhere, some are privately owned.

“At the end of World War II they had so many they just sold them,’ Roark said.

The T-33 will be the third aircraft on display at the Aviation Heritage Park at Basil Griffin Park. The others on display are an F-4D Phantom and a Grumman Panther. The park organizers don’t just take any aircraft they can get their hands on.

‘There’s a story to go with every plane,” Franklin said, referring to stories involving local individuals who were connected to the models of aircraft.

The T-33 is in honor of Glasgow native and Western Kentucky University graduate Gen. Russell Dougherty. Dougherty frequently flew a T-33 plane from Offutt Air Force Base in Omaha, Neb., to Washington, D.C., while he served as commander of Strategic Air Command. Dougherty died in 2007 at age 86.

Franklin said they begin their search for aircraft by learning about local aviators who served our country. The group has a wish list of planes it would like to acquire.

The next aircraft it is planning to acquire is a NASA T-38 to honor local astronaut Terry Wilcutt.

Once group members locate a plane they need, it’s only a matter of getting it to Bowling Green and restoring it. These things cost money, however, and Franklin said they appreciate any support they receive.

Franklin said they have space for seven airplanes at the park and they are looking forward to filling the empty spaces. This year, they will continue to work on the T-33 as well as bring the T-38 to town.

“It’s going to be a busy year for the Aviation Heritage Park,” Franklin said. 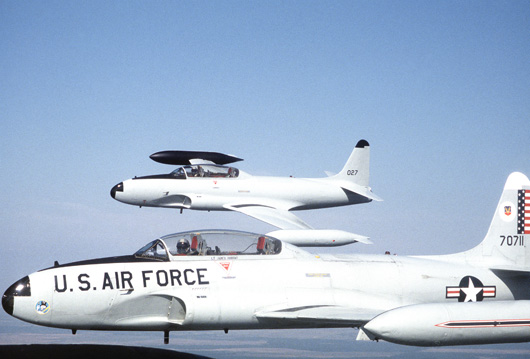 Workhorse airplane involved in D-Day to be restored