Wigwam Motels, two of the most recognizable structures along Route 66, located in Holbrook, Ariz., and San Bernardino, Calif. Image courtesy of the Mercer Museum.

DOYLESTOWN, Pa. (AP) – Last Saturday turned out to be quite a birthday for Arthur Hochman, of Hopewell, N.J.

With “Route 66” tattooed on his right arm, he felt comfortably at home at the “America’s Road: The Journey of Route 66,” exhibit at the Mercer Museum in Doylestown.

Hochman and his wife, Robin, have taken trips to the historic cross-country route from Chicago to Los Angeles several times in the past six years.

“Today’s my birthday. My wife brought me to the exhibit to do something fun. We’re Route 66 enthusiasts because of our travels out West,” Hochman said. “We’ve been back four times to take in different sections of the route.”

Peter Wilson, of Simi Valley, Calif., took the route in 1957. He and his wife settled in California like many of the travelers who used it to go west from the 1920s through its heyday in the 1950s.

They had to carry a container of water in the front seat of the car. It helped keep the engine cool in the hot deserts of the Southwest. If the radiator overheated, they could refill it with the water.

Wilson’s son and daughter-in-law, Mike and Darlene Wilson, of Bensalem, Pa., decided to bring him to the exhibit with their children, Isaiah, 13, and Nichole, 16, to see all the different types of vehicles that traveled the road.

“It was a dusty trip,” the elder Wilson recalled. “A lot of it wasn’t paved.”

Sig Schorr, of Long Valley, N.J., never traveled the road in a ’57 Chevy or a wood-sided station wagon, but he recalled the Route 66 TV show that millions of baby boomers grew up watching.

“We grew up with the TV show. There was always the romance of traveling. In our generation, you didn’t do it unless you had some money. It wasn’t an easy thing to do.”

The Route 66 show was “like a modern version of being a cowboy. We grew up with the cars instead of the horses. This was our way of fantasizing of heading west,” Schorr said.

The exhibit, which runs through Sunday, features several different vehicles from the mid-century era when car travel was popular, as well as historical information on the route and photographs of sights along the way. Among the cars featured is a 1969 Mercedes Benz once owned by Elvis Presley.

According to the exhibit, the route was opened in 1926 as a connector between the Upper Midwest and the West Coast. During the 1930 Dust Bowl years, many residents of Oklahoma and neighboring states, where 300 million tons of topsoil blew away in droughts, used the road to head west to California.

Alex Groce, 16, of North Wales, helped the kids set up the races. “I love the Route 66 exhibit. It’s one of my favorites,” Groce said.

As they watched their children play, Tiffany and Chris Godshalk, of Warwick, said they had taken a vacation on Route 66, camping out along the way.

“It was amazing. We can’t wait to do it again,” Tiffany Godshalk said.

Information from: The Intelligencer, http://www.theintell.com

Wigwam Motels, two of the most recognizable structures along Route 66, located in Holbrook, Ariz., and San Bernardino, Calif. Image courtesy of the Mercer Museum. 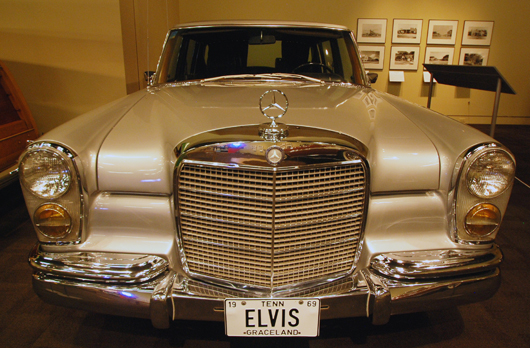