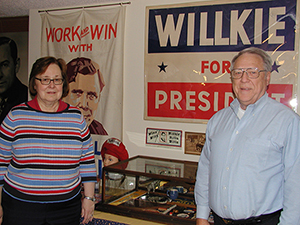 LOGANSPORT, Ind. (AP) – A small-scale reproduction of Abraham Lincoln’s head as it looks at the Mount Rushmore National Memorial is sitting in the basement of a new museum in Logansport. The green replica of the work by Gutzon Borglum, the sculptor of Mount Rushmore, sits at a little more than 3 feet by 2 feet. The piece was found at an auction in Indianapolis and was previously used by a bank in Lincoln, Neb.

Sue and Julian Ridlen have been collecting various kinds of political campaign memorabilia for decades—Sue began collecting as a young girl, and Julian started when he was in college. Buttons, matchbooks, hats, china, pictures, walking sticks, canes and even a voting machine contribute to a collection they have accumulated.

Not counting duplicates, Sue and Julian Ridlen have 5,000 buttons.

“We laugh and say we merged our collections when we married,” Julian Ridlen told the Pharos-Tribune. “Over time we’ve had an interest in creating a political museum.”

The opening of their museum has been a long time coming—eight years, to be exact. Sue and Julian Ridlen will finally see it come to life Sunday.

The couple met in Washington while they were both working for Sen. Homer Capehart’s office. Sue is a native of Logansport and Julian was studying in Anderson at the time, so they were both Hoosiers meeting in a Hoosier office, Julian Ridlen said.

“We became interested in not only the items themselves, but the history they represent,” Julian Ridlen said.

Political campaigns over the years have included items from medals and tokens at the earliest time to buttons, bobble heads and other paraphernalia seen today. Through campaigns for presidential hopefuls, themes developed ranging from a log cabin and cider to a torch and a gold bug.

“The object and idea for candidates is to get their name in front of the public,” Julian Ridlen said.

The images of candidates was put on several items, including wash basins, straight razors, soap, china and trays used to carry beer at pubs. Paper lanterns from the mid-19th century would also have a candidate on them.

Uniforms or outfits and hats would also display political messages. All of these items—which were found at national meetings, catalogs, estates and special auctions—can be seen at the museum.

“We want people to enjoy the opportunity to see the variety of items available to candidates,” Sue Ridlen said. “It’s fun to see the various means of conveying a political message as a collector.”

“There is a long tradition in our country. … We dare not live without the political process,” Julian Ridlen said. “Each of us may individually think the country has made a mistake from time to time, but we do have the right to express our opposition in the next election.”

Although the museum will not have regular hours, since it’s just the Ridlen couple running it, those who wish to see the museum may call them at 574-722-9640 to request a tour. There will not be a cost to those wishing to see the collection of items.

“It’s always nice to have the opportunity to share it with others,” Julian Ridlen said. “We thrill at the process of collecting gems along the way and find it important to preserve these items.”

The collection includes some items dating back to the 1790s and spanning all the way to the present day. Five rooms make up the 1,400-square-foot area.

“It’s a start,” Julian Ridlen said. “We have things in storage that are waiting the opportunity to be shown.”

His wife agreed, saying they have enjoyed working together.

“It’s essentially an extension of our home,” Sue Ridlen said. “We’ve enjoyed getting items out of the boxes.”

The museum may expand in the future, Julian Ridlen said. 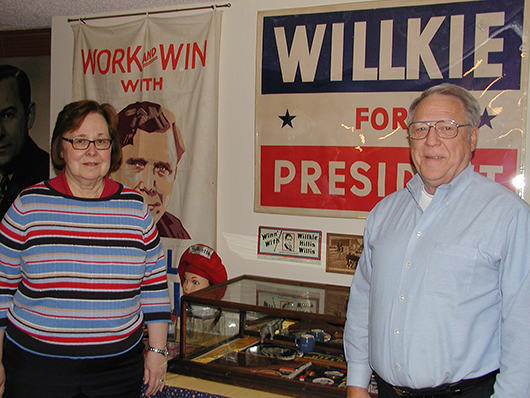 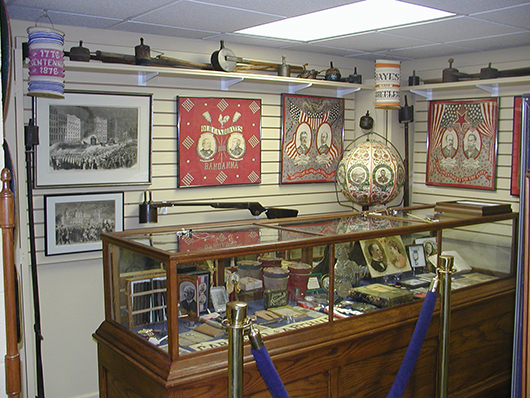 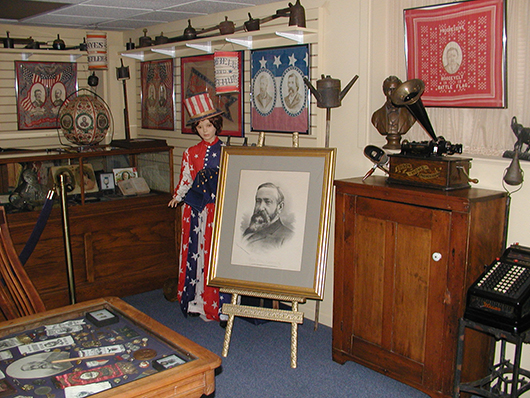