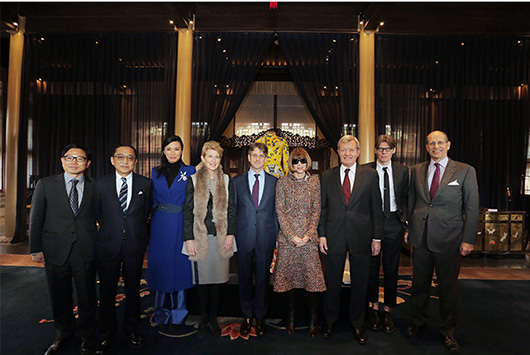 NEW YORK – The Metropolitan Museum of Art held a press briefing today at the Palace Museum in Beijing, China, about its spring 2015 Costume Institute exhibition, “China: Through the Looking Glass.” The exhibition, on view at the Met from May 7 to Aug. 16, will explore how Chinese art and film have influenced Western fashion design for centuries.

Director Shan welcomed guests to the Palace of Established Happiness (Jianfu Palace) in the Forbidden City, Ambassador Baucus delivered remarks, and Campbell highlighted the importance of cultural and artistic exchange between China and the Met. Bolton discussed how the exhibition will juxtapose Chinese art and historic costumes with high fashion to demonstrate the West’s fascination with Chinese imagery. Wong Kar Wai discussed the role of film in the exhibition and showed a montage of the film clips that will be used in the exhibition to illuminate the impact of the cinematic arts on Western fashion.

During the press briefing, a display in the Jianfu Palace featured images and objects to be included in the Met exhibition: an Yves Saint Laurent gown (by Tom Ford, 2004) inspired by the dragon robe worn by Puyi (1906-1967), the last Chinese emperor, for his inauguration in 1908; and a blue-and-white Chanel beaded gown (by Karl Lagerfeld, 1984) and a Roberto Cavalli gown (2005) whose patterns reflect those on Chinese export porcelains. This interchange between art and fashion complements the Palace Museum’s mission to highlight the essence of Chinese art and culture formed over thousands of years, as well as the Costume Institute’s commitment to exploring the connection between art and fashion. The Costume Institute became part of the Met in 1946, and subsequently built a world-class collection including more than 35,000 garments from five continents, with some dating back to the 15th century.

“China: Through the Looking Glass” will be on view in the Met’s Chinese Galleries and in the Anna Wintour Costume Center. It will feature more than 130 haute couture and ready-to-wear fashions juxtaposed with traditional Chinese masterpieces in jade, lacquer, cloisonné, and blue-and-white porcelain. Chinese imagery will be used throughout the exhibition, presenting a series of “mirrored reflections” that focus on the evolution of art, fashion, and culture from Imperial China through to the present-day People’s Republic of China.

Bolton, curator of the exhibition, noted: “From the earliest period of European contact with China in the 16th century, the West has been enchanted with enigmatic objects and imagery from China, providing inspiration for fashion designers from Paul Poiret to Yves Saint Laurent. Through the looking glass of fashion, designers conjoin disparate stylistic references into a pastiche of Chinese aesthetic and cultural traditions.”

Hearn added, “China has long been an intriguing source of inspiration for Western artists. As the Met’s Asian Art Department embarks on its 100th year, our permanent collection continues to celebrate the genius of China’s ancient traditions. This collaboration between two curatorial departments will demonstrate how Western designers have responded creatively to those traditions in ways that are both provocative and insightful.”

A special feature on the Museum’s website, www.metmuseum.org/ChinaLookingGlass, provides information about the exhibition.