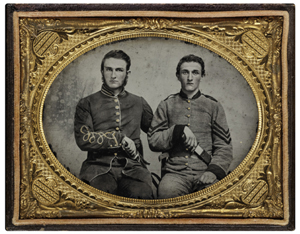 NEW YORK – More than 200 of the finest and most poignant photographs of the American Civil War have been brought together for the landmark exhibition “Photography and the American Civil War,” opening April 2 at the Metropolitan Museum of Art. Through examples drawn from the Metropolitan’s celebrated holdings of this material, complemented by exceptional loans from public and private collections, the exhibition will examine the evolving role of the camera during the nation’s bloodiest war.

The “War between the States” was the great test of the young Republic’s commitment to its founding precepts; it was also a watershed in photographic history. The camera recorded from beginning to end the heartbreaking narrative of the epic four-year war (1861–1865) in which 750,000 lives were lost. This traveling exhibition will explore, through photography, the full pathos of the brutal conflict that, after 150 years, still looms large in the American public’s imagination.

The presentation at the Metropolitan coincides with the sesquicentennial of the Battle of Gettysburg (July 1–3, 1863), the turning point in the war.

“During the Civil War years, the medium of photography matured and flourished in surprising and unexpected ways, and what survives from the period is a rich visual legacy of stunning complexity. The tragic beauty and profundity of the photographs have been a touchstone for generations of artists from Walker Evans in the 1930s to today,” said Thomas Campbell, director and CEO of the Metropolitan Museum of Art.

At the start of the Civil War, the nation’s photography galleries and image purveyors were overflowing with a variety of photographs of all kinds and sizes, many examples of which will be featured in the exhibition: portraits made on thin sheets of copper (daguerreotypes), glass (ambrotypes), or iron (tintypes), each housed in a small decorative case; and larger, “painting-sized” likenesses on paper, often embellished with India ink, watercolor, and oils. On sale in bookshops and stationers were thousands of photographic portraits on paper of America’s leading statesmen, artists, and actors, as well as stereographs of notable scenery from New York’s Broadway to Niagara Falls to the canals of Venice. Viewed in a stereopticon, the paired images provided the public with seeming three-dimensionality and the charming pleasure of traveling the world in one’s armchair.

“Photography and the Civil War” will include: intimate studio portraits of armed Union and Confederate soldiers preparing to meet their destiny; battlefield landscapes strewn with human remains; rare multipanel panoramas of the killing fields of Gettysburg and destruction of Richmond; diagnostic medical studies of wounded soldiers who survived the war’s last bloody battles; and portraits of Abraham Lincoln as well as his assassin John Wilkes Booth. The exhibition features groundbreaking works by Mathew B. Brady, George N. Barnard, Alexander Gardner, and Timothy O’Sullivan, among many others. It also examines in-depth the important, if generally misunderstood, role played by Brady, perhaps the most famous of all wartime photographers, in conceiving the first extended photographic coverage of any war. The exhibition addresses the widely held, but inaccurate, belief that Brady produced most of the surviving Civil War images, although he actually made very few field photographs during the conflict. Instead, he commissioned and published, over his own name and imprint, negatives made by an ever-expanding team of field operators, including Gardner, O’Sullivan, and Barnard.

The exhibition will feature Gardner’s haunting views of the dead at Antietam in September 1862, which are believed to be the first photographs of the Civil War seen in a public exhibition. A reporter for the New York Times wrote on Oct. 20, 1862, about the images shown at Brady’s New York City gallery: “Mr. Brady has done something to bring home to us the terrible reality and earnestness of war. If he has not brought bodies and laid them in our dooryards and along the streets, he has done something very like it … Here lie men who have not hesitated to seal and stamp their convictions with their blood,—men who have flung themselves into the great gulf of the unknown to teach the world that there are truths dearer than life, wrongs and shames more to be dreaded than death.”

Approximately 1,000 photographers worked separately and in teams to produce hundreds of thousands of photographs—portraits and views—that were actively collected during the period (and over the past century and a half) by Americans of all ages and social classes. In a direct expression of the nation’s changing vision of itself, the camera documented the war and also mediated it by memorializing the events of the battlefield as well as the consequent toll on the home front.

Among the many highlights of the exhibition will be a superb selection of early wartime portraits of soldiers and officers who sat for their likenesses before leaving their homes for the war front. In these one-of-a-kind images, a picture of American society emerges. The rarest are ambrotypes and tintypes of Confederates, drawn from the renowned collection of David Wynn Vaughan, who has assembled the country’s premier archive of Southern portraits. These seldom-seen photographs, and those by their Northern counterparts, will balance the well-known and often-reproduced views of bloody battlefields, defensive works, and the specialized equipment of 19th-century war.

The show will focus special attention on the remarkable images included in the two great wartime albums of original photographs: Gardner’s Photographic Sketch Book of War and George N. Barnard’s Photographic Views of Sherman’s Campaign, both released in 1866. The former publication includes 100 views commissioned, sequenced, and annotated by Alexander Gardner. This two-volume opus provides an epic documentation of the war seen through the photographs of 11 artists, including Gardner himself. It features 10 plates of Gettysburg, including Timothy O’Sullivan’s A Harvest of Death, Gettysburg, and Gardner’s Home of a Rebel Sharpshooter, Gettysburg, both of which are among the most well-known and important images from the early history of photography. The second publication includes 61 large-format views by a single artist, George N. Barnard, who followed the army campaign of one general, William Tecumseh Sherman, in the final months of the war—the “March to the Sea” from Tennessee to Georgia in 1864 and 1865. The exhibition explores how different Barnard’s photographs are from those in Gardner’s Sketch Book, and how distinctly Barnard used the camera to serve a nation trying to heal itself after four long years of war and brother-versus-brother bitterness.

Among the most extraordinary, if shocking, photographs in the exhibition are the portraits by Dr. Reed Brockway Bontecou of wounded and sick soldiers from the war’s last battles. Drawn from a private medical teaching album put together by this Civil War surgeon and head of Harewood Hospital in Washington, D.C., and on loan from the celebrated Burns Archive, the photographs are notable for their humanity and their aesthetics. They recall Walt Whitman’s words from 1865, that war “was not a quadrille in a ball-room. Its interior history will not only never be written, its practicality, minutia of deeds and passions, will never be suggested.” Bontecou’s medical portraits offer a glimpse of what the poet thought was not possible.

In addition to providing a thorough analysis of the camera’s incisive documentation of military activity and its innovative use as a teaching tool for medical doctors, the exhibition explores other roles that photography played during the war. It investigates the relationship between politics and photography during the tumultuous period and presents exceptional political ephemera from the private collection of Brian Caplan, including: a rare set of campaign buttons from 1860 featuring original tintype portraits of the competing candidates; a carved tagua nut necklace featuring photographic portraits of Confederate President Jefferson Davis and two members of his cabinet; and an extraordinary folding game board composed of photographic likenesses of President Lincoln and his generals. The show also includes an inspiring carte de visite portrait of the abolitionist and human rights activist Sojourner Truth. A former slave from New York State, she sold photographs of herself to raise money to educate emancipated slaves, and to support widows, orphans, and the wounded. And finally the exhibition includes the first photographically illustrated “wanted” poster, a printed broadside with affixed photographic portraits that led to the capture John Wilkes Booth and his fellow conspirators after the assassination of President Lincoln in April 1865.

The exhibition is organized by Jeff L. Rosenheim, curator in charge of the museum’s Department of Photographs. Rosenheim also wrote the fully illustrated catalog that will accompany the exhibiton. Published by the Metropolitan Museum of Art, and distributed by Yale University Press, the book will be available in the museum’s book shop ($50, hardcover).

The exhibition runs through Sept. 2. 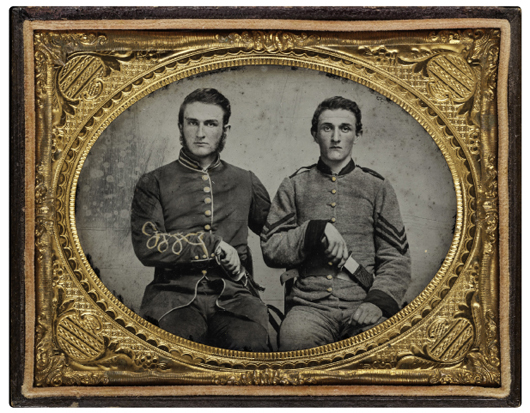