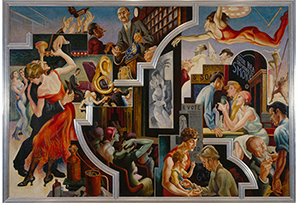 Thomas Hart Benton (American, 1889-1975) ‘City Activities with Dancehall’ from ‘America Today,’ 1930–31. Mural cycle consisting of 10 panels. Egg tempera with oil glazing over Permalba on a gesso ground on linen mounted to wood panels with a honeycomb interior. The Metropolitan Museum of Art, Gift of AXA Equitable, 2012.

Missouri native Thomas Hart Benton (1889–1975) painted the 10-panel mural cycle in 1930–31 for New York’s New School for Social Research to adorn the boardroom of its International Style modernist building on West 12th Street. It was commissioned by the New School’s director, Alvin Johnson, who had fashioned the school as a center for progressive thought and education in Greenwich Village. Depicting a sweeping panorama of American life during the 1920s, America Today ranks among Benton’s most renowned works and as one of the most significant accomplishments in American art of the period.

“This exhibition is the culmination of an extraordinary partnership between the Metropolitan and AXA, which donated the mural to the museum and also serves as the exhibition’s sponsor. For this, we are tremendously grateful,” stated Thomas P. Campbell, director and CEO of the Metropolitan Museum.

“The Metropolitan’s presentation of Benton’s great mural will shed new light on this visually and intellectually stimulating landmark in American art of the early 1930s, especially as the Museum will display the mural as the artist originally intended it to be seen. Positioning the mural’s new home in the context of the Metropolitan’s diverse collections, the exhibition also tells a unique story rooted in New York’s own cultural history.”

America Today was Benton’s first major mural commission and the most ambitious he ever executed in New York City. The exhibition will demonstrate how the work not only marked a turning point in Benton’s career as a painter—elevating his stature among his peers and critics—but in hindsight stands out even more as a singular achievement of American art of the period, one that, among other effects, served to legitimize modern mural painting as part of the Works Progress Administration’s Federal Arts Project in the 1930s.

Stylistically bold, America Today stands midway between the artist’s early experiments in abstraction, signs of which are still evident in the mural, and the expressive figurative style for which he is best known today. Thematically, the mural evokes the ebullient belief in American progress that was characteristic of the 1920s, even as it acknowledges the onset of economic distress that would characterize life in the following decade. The commissioning of America Today also marked an important episode in international modernism; the great Mexican muralist José Clemente Orozco was commissioned to paint a mural in the New School at the same time, and the two artists worked on their projects concurrently.

On view starting Sept. 30 in the Museum’s Erving and Joyce Wolf Gallery in the American Wing, the exhibition will be organized into three sections: the first will feature a large selection of Benton’s studies for the mural; the second will present the mural installed in a facsimile of its original space at the New School; and the third will feature related works by other artists, all from the Museum’s collection.

The keystone of the exhibition—the mural—will be installed in a reconstruction of the 30-by-22-foot boardroom as it existed at the New School in 1931, allowing viewers to experience the mural cycle as Benton conceived it. A highlight of this extraordinary opportunity to view the reconstructed mural in its nearly original setting is the incorporation of elements that were part of the architect Joseph Urban’s modernist aesthetic for the New School building, such as the black and red color scheme he used for the room. Among the mural’s most distinctive features are the aluminum-leaf wooden moldings, which not only frame the mural but also create inventive spatial breaks within each large panel. When the mural was installed at the New School, these moldings echoed the Art Deco details of Urban’s building design.

The 10 panels—most of which loom to a height of 7 1/2 feet—depict a panoramic sweep of rural and urban life on the eve of the Great Depression. They capture the tension of early modern America, with allusions to race relations and social values, while simultaneously celebrating the themes of industry, progress, and urban life. An array of pre-Depression types—flappers, farmers, steel workers, stock market tycoons, and others representing a cross section of American life—will surround visitors in the mural space and can be further explored in the adjacent galleries, which will present many of the studies Benton made during his travels around the United States in the 1920s and to which he referred for the mural project.

The second section of the exhibition, featuring Benton’s studies for America Today, illuminates the deliberative nature of his working process. Besides the impressions Benton captured during his travels around the U.S. in the 1920s, the studies on view will include character studies in pencil for figures that appear in the mural, as well as painted compositional studies for individual mural panels.

The final section of the exhibition includes works that relate to Benton’s America Today drawn from the Metropolitan Museum’s Departments of Modern and Contemporary Art, Photographs and European Paintings. Highlights of this section are other works by Benton; renowned photographs by Walker Evans, Berenice Abbott and Lewis Hine; and, of particular interest, Jackson Pollock’s Pasiphaë (1943). During the time Benton was painting America Today, Pollock was his student and served as a model for his teacher’s mural. The inclusion of Pollock’s abstract painting in the exhibition provides opportunities to consider the complex personal and artistic relationship between the two artists.

After more than 50 years in the boardroom of the New School, a space that was subsequently used as a classroom, America Today proved difficult for the school to maintain in perpetuity. In 1982, the school announced the sale of the mural cycle to the Manhattan art dealer Maurice Segoura, with the condition that it would not be resold outside the United States or as individual panels. But the work was a great challenge to sell as a whole, increasing the likelihood that the panels would be dispersed.

America Today was acquired by AXA (then Equitable Life) in 1984, in support of efforts on the part of then-Mayor Edward I. Koch and others to keep it intact and in New York City. Two years later, after extensive cleaning and restoration, America Today was unveiled to critical acclaim in AXA’s new headquarters at 787 Seventh Ave. When the company moved its corporate headquarters again in 1996, to 1290 Avenue of the Americas, America Today was put on display in the lobby. There it remained until January 2012, when the company was asked to remove it to make way for a renovation. The removal triggered AXA’s decision to place the historic work in a museum collection, and in December 2012, AXA donated the mural to the Metropolitan Museum. 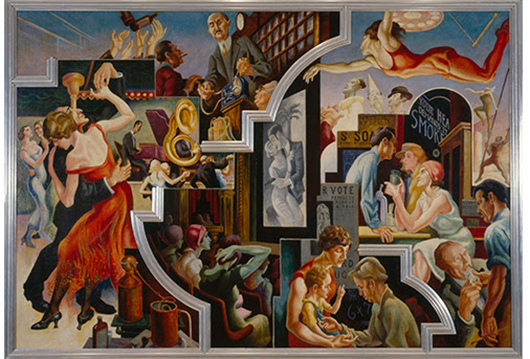 Thomas Hart Benton (American, 1889-1975) ‘City Activities with Dancehall’ from ‘America Today,’ 1930–31. Mural cycle consisting of 10 panels. Egg tempera with oil glazing over Permalba on a gesso ground on linen mounted to wood panels with a honeycomb interior. The Metropolitan Museum of Art, Gift of AXA Equitable, 2012.