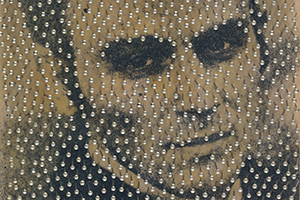 For a 1963 self-portrait, Lucas Samaras impaled his visage — with the exception of his eyes — with hundreds of pins. Image courtesy of the Metropolitan Museum of Art.

NEW YORK – Previously set to close on June 1, “Lucas Samaras: Offerings from a Restless Soul” has been extended to remain on view through Sept. 1 at the Metropolitan Museum of Art. The installation features more than 60 works drawn from the museum’s collection of the highly idiosyncratic body of work made by Lucas Samaras.

The installation includes the 2014 gift of 17 objects ranging from Samaras’ abstract work of the 1960s to his recent digitally based pieces. Designed with the input of the artist, the exhibition is installed in both the north and south mezzanine galleries in the Lila Acheson Wallace Wing for modern and contemporary art.

Born in 1936 in Greece, Samaras grew up amidst the traumas of World War II and the Greek Civil War. He moved to the United States as an adolescent, settling first in New Jersey before moving to New York City. He was a key participant in many of the early “Happenings” staged by Claes Oldenburg, Allan Kaprow and Jim Dine. He was among the first artists to exploit the Polaroid photograph when it was introduced. Moreover, he is a skilled draftsman, painter, sculptor, filmmaker and, most recently, a creator of brilliantly colored, phantasmagoric photographs that he has manipulated digitally.

Samaras studied at New York’s famed Stella Adler Conservatory for Acting in the late 1950s. Although he never became a professional actor, the black-and-white headshot he had taken for promotional purposes became fodder for his art. For a 1963 self-portrait, using one of his favorite implements, he impaled his visage in the headshot—with the exception of his eyes—with hundreds of pins. Between 1962 and 1989, Samaras made 135 highly complex box constructions. One early example, Box #10 (1963), is covered with pins, tiny springs, and colored yarn. Characteristic of his box constructions, Box #10 opens to reveal fantastic, sparkling objects in its many hidden compartments; additionally, when the tiny button on the underside of the lid is pulled, the familiar head shot is revealed—this time framed by rainbows of yarn.

The artist is well-known for imaginatively exploiting the medium of the Polaroid. When Samaras was given an SX-70 camera by Polaroid in 1973, he said it was “one of the greatest gifts anyone could give an artist.” Photo-Transformation (1973) is one of his early so-called Photo-Transformations, each of which is a self-portrait in some way. Anticipating Photoshop by some 15 years, the artist is seen with his fist before his face in a haunting image created entirely by hand-manipulating the emulsions of the photo surface before it dries. In the 1980s Samaras made a series called “Panoramas,” again using Polaroid film but to very different effect, as he pieced together slices of many photographs to create an 84-inch-wide view of his home—his tiny kitchen and his study filled with the ingredients of his life and implements of his art.

“Lucas Samaras: Offerings from a Restless Soul” is organized by Marla Prather, Curator in the Department of Modern and Contemporary Art at The Metropolitan Museum of Art, in collaboration with the artist. 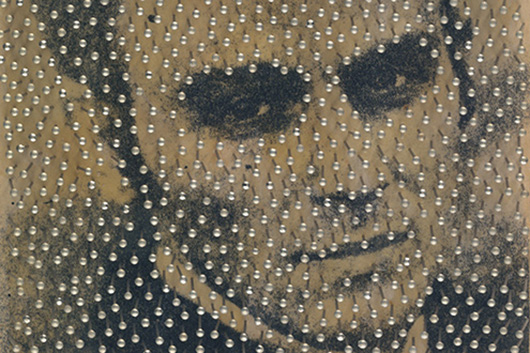 For a 1963 self-portrait, Lucas Samaras impaled his visage — with the exception of his eyes — with hundreds of pins. Image courtesy of the Metropolitan Museum of Art.

Jeffrey S. Evans presents round 2 of miniature lamps May 31
Scroll to top