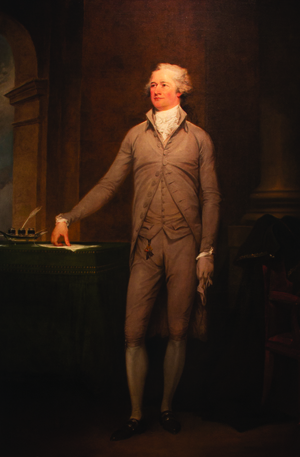 NEW YORK – An iconic full-length portrait by the celebrated Revolutionary-era painter John Trumbull of Alexander Hamilton, then Secretary of the Treasury under President George Washington, will join the permanent collections of both the Metropolitan Museum of Art and Crystal Bridges Museum of American Art, thanks to a gift from the painting’s owner, the global wealth manager and investment bank Credit Suisse.

Each institution will own a half share of Portrait of Alexander Hamilton (1792), which is currently on view at Crystal Bridges and has been on loan from Credit Suisse and on view since the museum opened. The painting will travel to the Metropolitan Museum in summer 2013 and return to Crystal Bridges in 2014. In subsequent years, each museum plans to exhibit the painting for two-year periods, when it will be integrated into the galleries and, on occasion, included in special exhibitions at each museum.

“We are very grateful to Credit Suisse for the generous gift of this distinguished portrait of Alexander Hamilton, whose political and legal acumen put him at the center of the founding of the new American republic, and whose key contributions to business and banking in Federal-era New York City effectively established the financial marketplace in this country,” said Thomas P. Campbell, director and CEO of the Metropolitan Museum of Art. “As the greatest known portrait of Hamilton and one of the finest civic portraits from the Federal period, this painting is a splendid addition to our fine collection of portraits of American political leaders. We are pleased and honored to share this remarkable work with Crystal Bridges.”

“Trumbull’s Alexander Hamilton is not only an important work of American art, but as a portrait of one of our country’s Founding Fathers, it’s an important document in American history,” said Don Bacigalupi, president of Crystal Bridges. “This painting has been on view at Crystal Bridges since we opened, and we’re grateful to Credit Suisse for their generosity in allowing us to add this fine example to our collection. This shared gift demonstrates how institutions can work together to further expand and enrich access to art through collection sharing. We look forward to continuing our productive relationship with the Met.”

“Donating this well-known and highly regarded 1792 portrait of Alexander Hamilton by John Trumbull to both Crystal Bridges Museum of American Art and The Metropolitan Museum of Art ensures that the widest possible American and international audiences can enjoy and study this historic piece of fine art for perpetuity,” said Brady Dougan, CEO of Credit Suisse.

In December 1791, a committee of five New York merchants commissioned John Trumbull (1756-1843), one of the nation’s leading artists, to paint this full-length portrait of the first Secretary of the Treasury, Alexander Hamilton (1757-1804). An illegitimate child born in the Caribbean, Hamilton was orphaned at age 13 by his father’s desertion and his mother’s death. He labored as a clerk at a St. Croix trading house before he was sent by his bosses to be educated in New York, the city he would adopt as his home. Hamilton had fought alongside Washington and Lafayette during the Revolution. He was also Washington’s primary adviser in financial and legal matters. After participating in the Constitutional Convention of 1787, he articulated his nationalist principles of government in a series of pamphlets signed “Publius.” These were published in New York newspapers and later compiled in two volumes titled The Federalist. Written in cooperation with John Jay and James Madison, they expounded Hamilton’s belief that only a strong federal government could sustain the union and encouraged the delegates to ratify the Constitution. Envisioning a close collaboration between government and mercantile communities, he launched plans to encourage native manufacturing, to improve the infrastructure of the young republic, and to establish a national bank.

The committee that commissioned Hamilton’s portrait in 1791 represented the Chamber of Commerce, a recently founded society of merchants in New York City. The painting was destined for the Chamber’s offices, where it served as a testimony to the members’ admiration for the sitter and commemorated Hamilton as a model of public and mercantile virtue. Hamilton and Trumbull were Revolutionary colleagues and friends. Hamilton probably sat for Trumbull early in 1792, when the artist was visiting Philadelphia to take a likeness for his paintings of the recent events of the American Revolution. Trumbull’s rendering of Hamilton’s proud composure, delicate features, and intelligent expression would ultimately be etched in the consciousness of Americans.

In painting the portrait, Trumbull succeeded in pleasing the wishes of both the donors and the sitter. The merchants commissioned a large-scale picture to be “placed in one of our public buildings.” Hamilton, on the other hand, wished to “appear unconnected with any incident of my political life. The simple representation of their fellow Citizen and friend will best accord with my feelings.” To create the sense of dignity appropriate to a life-size public portrait, the artist relied on traditional props—a column, background architecture, and a robe thrown over a chair—all of which derived from European grand manner portraiture. At the same time, Trumbull avoided elaborate trappings and overtly political symbols that would have been suitable for a man who had served as Washington’s military secretary, a Cabinet officer, and the powerful leader of the Federal party. The delicate color scheme and subdued highlights on such details as the brass upholstery tacks, Hamilton’s seals and watch fob, and the silver inkstand further suggest a private, unofficial atmosphere. Trumbull’s sympathetic portrayal of Hamilton suggests the respect he felt for the Federalist leader, whose fatal duel with Aaron Burr in 1804 the artist called “that unhappy event which deprived the United States of two of their most distinguished citizens.”

Credit Suisse acquired the painting in 2000, when it purchased investment bank Donaldson, Lufkin & Jenrette. Founder Richard Jenrette had amassed a large collection of art for the corporation, which went to Credit Suisse as part of the company acquisition. The painting was acquired by the Donaldson, Lufkin & Jenrette Collection of Americana in New York in 1983 from the New York Chamber of Commerce. 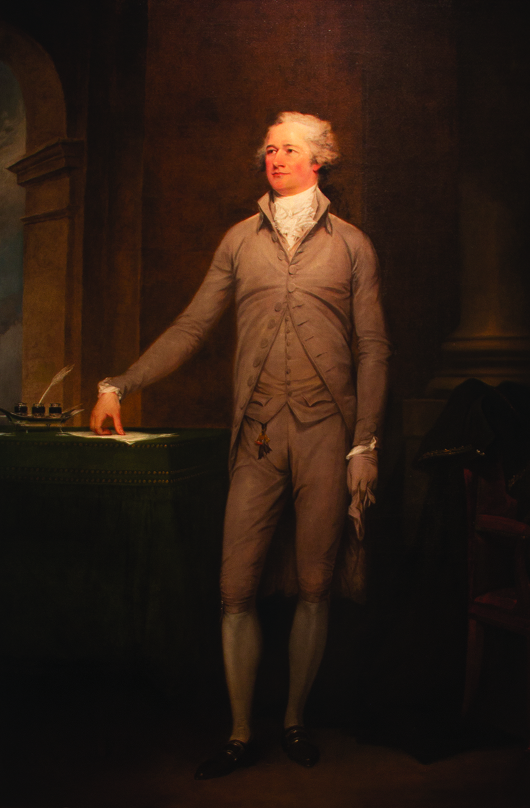