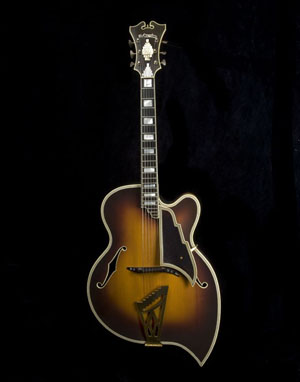 NEW YORK – Three New York master luthiers, renowned for their hand-carved stringed instruments—particularly their archtop guitars, which have been sought after by many of the most important guitarists of the last century—will be the subject of Guitar Heroes: Legendary Craftsmen from Italy to New York, on view at The Metropolitan Museum of Art from Feb. 9 through July 4.

Featuring the extraordinary guitars of John D’Angelico, James D’Aquisto and John Monteleone, this unprecedented exhibition of approximately 80 musical instruments will focus on the work of these modern-day master craftsmen and their roots in a long tradition of stringed instrument-making that has thrived for more than 400 years and that was first brought to New York from Italy around the turn of the 20th century.

The work of Italian luthiers, or makers of stringed instruments, has been highly desired since the 16th century, when lute makers in cities such as Venice and violin makers in places like Cremona supplied instruments for many of the most important personages in Europe. In subsequent centuries, makers such as the famed Antonio Stradivari continued this tradition. Stradivari, best known for his violins, built a great variety of stringed instruments, including both mandolins and guitars, one of which will be on loan to the exhibition.

By the end of the 18th century, Naples had become the dominant center for stringed-instrument production on the Italian peninsula, with makers there introducing innovations to both the mandolin and guitar. Later, in the decades around the turn of the 20th century, many skilled luthiers from southern Italy moved to New York as part of the mass immigration of the time. These makers set up workshops throughout the region, building traditional-style violins, guitars, and most importantly, mandolins, which experienced a tremendous popularity in America from the 1890s to the 1920s.

A change in musical tastes by the late 1920s meant that many Italian-American luthiers were suddenly forced out of business, but the young John D’Angelico was among a small group who were able to transition to building archtop guitars, an instrument that combined elements of violin construction (carved top, f-holes) with the guitar, based on the models being produced at the time by the Gibson Guitar Co. The archtop guitar was especially popular with jazz musicians in the days before the electric guitar. D’Angelico quickly built a reputation for his high-quality, beautifully constructed guitars. The tradition was carried forward by his apprentice James D’Aquisto, and continues today with the work of the famed mandolin and guitar maker John Monteleone.

Instruments by these makers have been used by some of the most influential guitar players of the 20th century through the present day, including Chet Atkins, Les Paul, George Benson, Paul Simon, Steve Miller, Mark Knopfler, Jim Hall and Grant Green, among others. Guitar Heroes will present more than 50 works by these makers, many of whom have been owned by some of these guitar greats. The works will be placed against the backdrop of the museum’s extensive collection, which includes masterpieces of Italian and Italian-American construction, showing the place of the modern-day masters in this long tradition.

The exhibition is made possible in part by Mr. and Mrs. Richard L. Chilton Jr. and organized by Jayson Kerr Dobney, associate curator and administrator in the Department of Musical Instruments at the Metropolitan Museum.

An app, the Museum’s first, has been conceived to complement and augment the exhibition. Through collaborations with musicians and experts, the app brings to life the guitar makers’ creative process and celebrates the enduring relevance of these instruments. It features museum-commissioned musical performances expressly designed for this exhibition, artist interviews, and rarely seen archival video footage. This dynamic multimedia guide to the exhibition, which has been developed by the Metropolitan Museum’s Digital Media Department, can be downloaded free from iTunes. It will also be available for rental on iTouch devices in the Museum’s galleries ($7, $6 for members, $5 for children under 12).

The Audio Guide program is made possible by Bloomberg.

Many of the app’s multimedia features, including longer excerpts of the performances and commentary—will be available in an extensive Guitar Heroes feature on the Museum’s website at www.metmuseum.org.

A related concert by the John Pizzarelli Quartet will be held in the museum’s Grace Rainey Rogers Auditorium on March 31. Tickets are available at www.metmuseum.org/tickets, 212-570-3949, or the box office in the Museum’s Great Hall.

A variety of educational programs will also be offered in conjunction with the exhibition, including gallery talks by Jayson Kerr Dobney; gallery concerts including performances on guitar, mandolin, and other instruments; a Sunday at the Met afternoon of programs on April 10, including a panel discussion and musical performances; and family and teen programs.

The exhibition will also be the subject of the Metropolitan Museum’s Spring 2011 Bulletin, which will be available in the Museum’s bookshops. 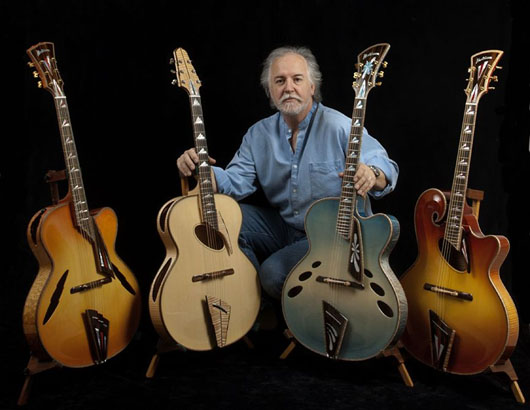