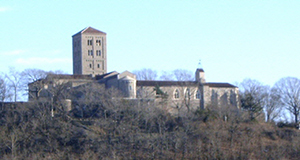 The Cloisters in Fort Tryon Park, Washington Heights, New York City, as seen from the Hudson River. A branch of the Metropolitan Museum of Art, it is used to exhibit art and architecture from Medieval Europe. Photo taken in December, 2004 by Moncrief.

NEW YORK – A superb array of six near-life-size enthroned figures in stained glass from England’s historic Canterbury Cathedral will be shown in the exhibition Radiant Light: Stained Glass from Canterbury Cathedral, opening February 25 at The Cloisters—a branch of The Metropolitan Museum of Art devoted to the art and architecture of the Middle Ages. The brilliantly colored panels come from one of the great surviving series of medieval stained glass, and the exhibition represents the first time they have left the cathedral precincts since their creation in 1178–80.

The exhibition completes the celebration of the 75th-anniversary year of the founding of The Cloisters.

The exhibition is made possible by the Ruddock Foundation for the Arts.

Founded in 597, the cathedral is one of the oldest Christian structures in England. Thomas Becket—who is venerated as a saint and martyr both by the Catholic Church and the Anglican Communion—was Archbishop of Canterbury from 1162 until his martyrdom in 1170. He was canonized in 1173. After a severe fire in 1174, the cathedral was extensively rebuilt, and the ambitious series of stained glass windows—in which 86 ancestors of Christ are depicted—was created at this time. No expense was spared in executing this extensive cycle.

The cathedral was an important pilgrimage site in the Middle Ages—as evidenced in Geoffrey Chaucer’s Canterbury Tales, a literary masterpiece from the 14th century—and its popularity increased after the construction of a shrine to Becket. Today, Canterbury Cathedral is the cathedral of the Archbishop of Canterbury, the leader of the Church of England and the Anglican Communion worldwide. Recent repairs to the stonework of the south transept window of this magnificent historic structure necessitated the removal of many of these stained-glass windows, all of unparalleled beauty. While the restoration of the windows has been undertaken, the stained glass has also been conserved.

The windows that will be shown at The Cloisters were originally from the clerestory of the cathedral’s choir, east transepts, and Trinity Chapel. The six figures—Jared, Lamech, Thara, Abraham, Noah, and Phalec—were part of an original cycle of 86 ancestors of Christ, the most comprehensive ancestor cycle known in art history. One complete window (Thara and Abraham), nearly 12 feet in height, will be shown with its associated rich foliate border.

These imposing figures are masterpieces of Romanesque art, and exude an aura of dignified power. The angular limbs, form-defining drapery, and encompassing folds of the mantles all add a sculptural quality to the majestic figures, which are remarkably legible, even at a distance. (At Canterbury Cathedral, the clerestory windows are some 60 feet above the floor. The display at The Cloisters will be arranged in a towerlike structure.) The glass painting of Methuselah Master—to whom the figures of Jared and Lamech are attributed—is distinguished by a remarkable delineation of form by means of a fluid graduated line and bold shading.

The exhibition is accompanied by a publication, The Ancestors of Christ Windows at Canterbury Cathedral, by Jeffrey Weaver (J. Paul Getty Museum) and Madeline H. Caviness (Tufts University). Written for general audiences, the book provides information about the context, iconography, and style of the windows, and how they were perceived by various communities during the Middle Ages. Published by The J. Paul Getty Museum, the book will be available in the Museum’s book shops ($25).

An interactive panorama of the Canterbury Cathedral on a large touch-screen monitor will provide visitors with a 360-degree view of the building’s interior and will show the windows in their original location. A short video, Recreating a Medieval Window, will be shown in gallery.

The installation is organized at The Cloisters by Timothy B. Husband, Curator, Department of Medieval Art and The Cloisters. Exhibition design is by Michael Langley, Exhibition Design Manager; graphics are by Mortimer Lebigre, Graphic Designer; and lighting is by Clint Ross Coller and Richard Lichte, Lighting Design Managers, all of the Museum’s Design Department.

An audio tour including interviews with Metropolitan Museum curator Timothy Husband and The Very Rev. Robert Willis is available for rental ($7, $6 for Members, $5 for children under 12).

The Audio Guide is sponsored by Bloomberg.

Education programs include a Sunday at the Met on March 2, 2014 at 3:00 p.m. in the Grace Rainey Rogers Auditorium. The early-music ensemble Blue Heron will perform “Music for Canterbury Cathedral” on Sunday, April 13, at 1:00 and 3:00 p.m. in the Fuentidueña Chapel at The Cloisters ($40). More information is available on the Museum’s website (http://www.metmuseum.org/events/programs/concerts-and-performances/blue-heron-a?eid=4252).

The exhibition will be featured on the Museum’s website at http://www.metmuseum.org. 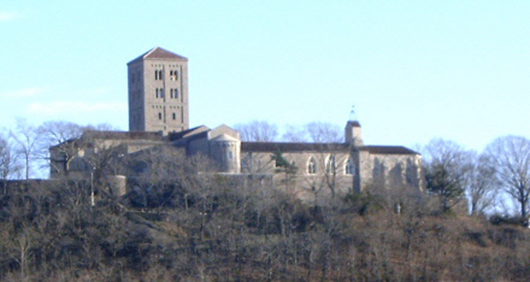 The Cloisters in Fort Tryon Park, Washington Heights, New York City, as seen from the Hudson River. A branch of the Metropolitan Museum of Art, it is used to exhibit art and architecture from Medieval Europe. Photo taken in December, 2004 by Moncrief.