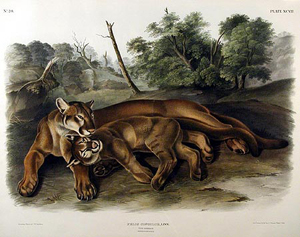 HENDERSON, Ky. (AP) – Audubon Museum Curator Alan Gehret isn’t kidding when he says the events leading to the acquisition of the museum’s latest treasure “make a heck of a story.”

That Audubon artifact – the large slab of fine-grained limestone used in the lithographic printing of “The Cougar” for the wildlife artist’s “Viviparous Quadrupeds of North America” – was ceremoniously unveiled Sunday during the museum’s celebration of Audubon’s 225th birthday.

Alongside it stood a framed and hand-colored print of “The Cougar”, also a recent acquisition for the museum that turns 72 in July.

Both pieces were purchased for the facility by the Friends of Audubon citizen support group that has, over the years, spent many thousands of dollars for Audubon artifacts for the museum.

The fact that both the lithographic stone and framed print of a mother cougar with her young were bought for less than $30,000 is considered quite a coup.

On Monday, Audubon’s actual birthday, Gehret said he believes the stone’s actual worth is more than $200,000.

It is one of only three of the Quadrupeds stones known to exist. The other two have been in the Cincinnati Museum of Natural History for some 40 years.

The stone is cracked and has a bottom portion chipped, but Gehret said he is investigating the possibility of restoration.

“This is a great find. It’s such a unique addition to our collection,” Gehret said of the lithographic stone used by lithographer J.T. Bowen of Philadelphia in the 1845-48 printing of the Quadrupeds volumes whose mammals were drawn by John James Audubon and his sons John Woodhouse Audubon and Victor Gifford Audubon.

The Audubon Museum collection is, the curator said, the most comprehensive assembly of John James Audubon’s works, writings and mementos in the world.

Gehret’s “heck of a story” began, in a sense, around the turn of the 20th Century when the Crocker lithography company in Cincinnati received a shipment of limestone lithographic slabs from a defunct company in New York.

Move ahead to about 1925, when a Crocker employee entered a company storage area in search of slate, which was used to thicken the limestone slabs for the heavy pressure of the printing process.

Using a chisel, the employee pried slate from two slabs, and uncovered two images used in the Quadrupeds printing the cougar and the white wolf.

Those slabs were displayed in the company’s front office until they were donated to the Cincinnati Museum of Natural History in the 1960s. Crocker had changed hands and become known as the Strobridge company.

But a third lithography stone had been uncovered, and it, too, bore the image of the mother cougar and her young. It was given to an employee of the printing company at about the midpoint of the last century and she put it in her Cincinnati art studio.

When she married a California man, she began selling off items and the stone wound up at a Cincinnati auction house last summer.

It was purchased by phone by a Virginia dealer in Audubon art, and that individual contacted Gehret on a Friday last July to determine if the museum here might want to buy it.

On Monday, however, the dealer told Gehret he had come to believe the piece was a fake. The dealer had learned of the Cougar lithographic stone in the museum in Cincinnati, and feared, Gehret said, that this one was a copy.

Thus began a trek that took the local curator to Cincinnati to confer with famed artist DeVere Burt, who formerly headed the Cincinnati museum.

Burt, in turn, made numerous inquiries and as a result, Gehret said, it appears the piece here likely is the original lithographic limestone that was used for the printing of “The Cougar.”

Because of the possibility of a cracked stone, he said, lithographers preserved images to be used in the event of a damaged stone.

The Friends of Audubon purchased the stone from the auction house, as the Virginia dealer had relinquished his claim. The dealer, however, later sold the framed Cougar print to the museum.

Gehret said he will be enormously surprised if additional lithographic stones from the Quadrupeds printing emerge.

Most of them, he believes, had their surfaces “ground down” in order to be reused for different images.

This, the curator said, is one more special piece that helps the museum “better tell the story of Audubon, the American “

He noted that Audubon’s defining work, the life-sized, four-volume “Birds of America,” captured most of the attention during the artist’s lifetime and now as well.

“We still have a lot of museum visitors who don’t know that Audubon painted mammals as well as birds.”

Information from: The Gleaner, http://www.thegleaner.com/

Perfume bottle auction April 30 to be highlight of convention