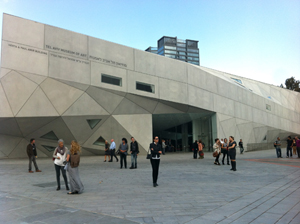 The Herta and Paul Amir Building of the Tel Aviv Museum of Art. Image by Arthur Schmunk. This file is licensed under the Creative Commons Attribution 2.5 Generic license.

TEL AVIV, Israel (AP) – The wine-red walls of the Brueghel exhibition hall at the Tel Aviv Museum of Art are now bare, like the crime scene of a daring art heist.

Tel Aviv’s leading art museum, spooked by rocket attacks on Israel’s cultural capital, moved nearly 200 works Friday into a rocket-proof safe the size of an auditorium – including some 100 works painted by relatives of Flemish Renaissance master Pieter Brueghel the Elder.

“Even if there’s a very small possibility (of damage), we don’t play around. We don’t take chances,” said Doron J. Lurie, the senior curator and chief conservator. “We’ve guarded them like our own kids.”

One other Israeli art museum followed suit, hauling some of its most prized artworks into fortified vaults deep underground to protect them from the current round of Israel-Palestinian fighting. For nearly a week, the Israeli military has waged air strikes against Gaza, while Palestinian militants have barraged Israel with rocket fire.

In the southern city of Ashdod, which has suffered more frequent rocket barrages because of its proximity to Gaza, the curator of the Ashdod Art Museum – Monart Center took down 15 works of leading contemporary Israeli artist Tsibi Geva. On Sunday, he stashed them in a vault four floors underground designed to withstand rocket fire and biological weapons.

“It’s chutzpah to take a chance on them,” said curator Yuval Biton, using the Yiddish word for “audacious.” It was the first time the Ashdod museum had hid its art in the vault since it opened in 2003.

Israel has seen its fair share of incoming fire over the past decade: Hezbollah launched rockets that rained down during the 2006 Lebanon war, and rockets from Gaza have repeatedly been fired into Israel’s south.

During fighting in Gaza four years ago, the art museum in the southern city of Beersheba moved works from unfortified storage to a reinforced vault in city hall, said Idit Amihai, the top government official in charge of museums.

But most of Israel’s leading museums in the heartland cities of Jerusalem and Tel Aviv – far from traditional rocket range – have had little reason to fortify artworks in the past.

Even during the current fighting, not all museums have rushed to protect their treasures. The Eretz Israel Museum in Tel Aviv, which displays Near Eastern antiquities and other art, left its works in place. “We don’t get into a panic and take stuff from the glass showcases,” museum spokeswoman Miri Tsedaka said.

And, despite one instance of rockets aimed toward Jerusalem that landed south of the city, no extra security precautions have been taken at the Israel Museum in Jerusalem, the country’s central museum housing its most prized antiquities and cultural possessions. “It’s business as usual,” said director James Snyder.

Lenny Wolfe, a prominent Jerusalem antiquities dealer, said he hasn’t moved his valuable ancient objects from his bank’s safe deposit box. “I’m more concerned about my own safety and the safety of my own family than a few bits of pottery,” Wolfe said.

The only other time the Tel Aviv museum rushed to save its works was during the 1991 Gulf War, when Iraqi Scud missiles pounded the seaside metropolis. At that time, the museum whisked its entire collection of paintings and sculptures into its large vault.

The works that were moved into the safe on Friday include one of the Jewish world’s most iconic paintings – Polish artist Maurycy Gottlieb’s 1878 work, Jews Praying in the Synagogue on Yom Kippur – as well as some 100 works by sons and relatives of Pieter Brueghel the Elder, and one precious painting by the master himself, the mid-16th century The Resurrection of Christ.

The Brueghel exhibit had already been crippled by Israel’s image as a dangerous place, said the curator, Lurie. He knew museums wouldn’t lend him many works by Brueghel himself, so he focused on persuading museums and collectors to lend him works by Brueghel’s descendants.

Then, a month before the “All His Sons: The Brueghel Dynasty” exhibition opened in August, two foreign museums backed down on their promise to loan two important paintings by the Flemish master’s sons because of heightened talk of a possible Iran-Israel war, Lurie said.

“‘Are you serious that you’re asking for this painting for summer 2012?’” Lurie recalled museum representatives telling him.

Now the exhibition’s works are behind a heavy, hulking metal door with an outsized combination lock. Wearing white gloves, Lurie turned a large silver wheel in the middle of the door and struggled to pull it open to show some of the stored paintings.

Despite concerns about the risks, top masterworks are frequently exhibited in Israeli museums on loan from world institutions and collectors. Displaying masterpieces is a trickier proposition in the West Bank: It took yearlong negotiations with Israel’s army and Dutch museum officials to get a $7 million Pablo Picasso masterpiece safely into a West Bank gallery in 2011.

Only a few rockets have whistled over the skies of Tel Aviv during the current conflict, and the city is considered safer than other Israeli towns along the Gaza border. So the Tel Aviv museum let southern Israelis visit the museum for free – and reduced admission for everyone else to account for the 200 or so missing spots on the museum walls. The Israel Museum and Eretz Israel Museum also offered free and discounted entry.

The works moved into the safes in Tel Aviv and Ashdod were mostly pieces on loan from private collectors.

“If they survived 800 years before they got here, we have to do the utmost, for the good of humanity, so they will survive at least another 500 years,” said Lurie. 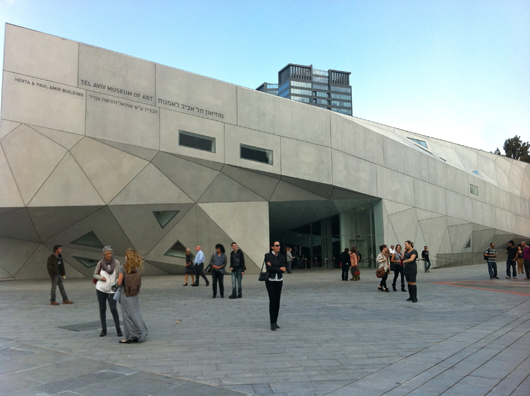 The Herta and Paul Amir Building of the Tel Aviv Museum of Art. Image by Arthur Schmunk. This file is licensed under the Creative Commons Attribution 2.5 Generic license.

Jerusalem’s walls restored, idiosyncracies and all