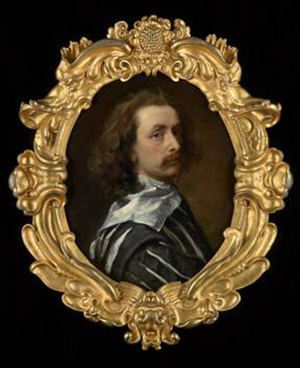 LONDON – Britain’s National Portrait Gallery (NPG) and the Art Fund today launched an appeal to raise £12.5 million to secure the last self-portrait of Sir Anthony Van Dyck. The painting has been in a British private collection for nearly 400 years but has been sold to a private collector who now wishes to take it abroad. This is the only chance a museum or a gallery in the United Kingdom has of acquiring the masterpiece, the NPG said in a press release.

The National Portrait Gallery has an initial three months to acquire Van Dyck’s exceptional Self-Portrait (1640-1), following a temporary Government export bar (issued on November 14, 2013) to prevent it from being taken overseas. The largest campaign in the gallery’s history, £1.2 million has already been raised including a grant of £500,000 towards the acquisition (as well as a further £150,000 to support a tour of the painting) from the Art Fund and £700,000 from the Gallery’s Portrait Fund and acquisition budget. The portrait goes on show at the Gallery from today.

Sir Anthony Van Dyck’s last self-portrait is a work of huge international importance and the only portrait of the artist made during his time in Britain ever likely to be made available for acquisition by a British public collection. Given its key place in British art and history, the Gallery, with the support of the Art Fund, plans to display the portrait both at its London home and, from early 2015, at partner museums and galleries around the country.

This enigmatic portrait dates from the end of Van Dyck’s life and presents an intimate image of an artist at work. He shows himself apparently in the act of painting, his hand raised in the process of applying paint to a canvas just out of sight. For today’s viewer, it conveys a sense of direct engagement with the artist as an individual, despite the passage of almost 400 years.

As well as enriching its present holding of three works by the artist, this Van Dyck painting, would make a significant addition to the National Portrait Gallery’s striking collection of self-portraits. These include works by Reynolds, Zoffany, Hogarth and Stubbs and, amongst twentieth-century and contemporary artists, Gwen John, Barbara Hepworth, Frank Auerbach, L S Lowry, Julian Opie, Gillian Wearing, Lucian Freud and David Hockney.

The frame of this painting, crested with the sunflower motif associated with the artist, is also of outstanding importance. Its unusually elaborate and exuberant carving has led some commentators to suggest that it was made much later than the painting, but recent research shows that it is almost certainly contemporary with the painting, and is likely to have been influenced by Van Dyck himself and designed with his involvement.

Sandy Nairne, Director of the National Portrait Gallery, London, said, “Van Dyck is one of the greatest artists to have worked in Britain. No other artist has had such a dramatic impact on British portraiture. He decisively turned it away from the stiff, formal approach of Tudor and Jacobean painting, developing a distinctive fluid, painterly style that was to dominate portraiture well into the twentieth century. It is very rare to have the opportunity to make a painting as important as Van Dyck’s last self-portrait available to everyone in Britain.”

Stephen Deuchar, Director of the Art Fund, said: “I urge you to help support the fundraising appeal to bring this extraordinary work permanently into the public realm. It is undoubtedly one of the finest and most important self-portraits in the history of British art, and the National Portrait Gallery’s collection provides the perfect context for its display.”

Artist Julian Opie said: “Although not large, this is a loud and dramatic painting. You see Van Dyck as the artist utterly confident and masterful with whipping brushstrokes of glistening paint. He is also the subject, witty, lively, a little cocky and very present. This is such a focused painting powerfully evoking a turbulent era. Nearly four hundred years on and it sparkles with life and light.”

Artist Gillian Wearing said: “This is a fantastic and evocative Van Dyck self portrait painting, that would enrich our whole culture if it can be made available to the public. We see Van Dyck painting his own portrait, looking at himself through a mirror. Or perhaps he is suggesting that we are the sitters as we look at him in the eye so directly? Museums have very few opportunities to acquire works of such importance, and this Van Dyck Self-portrait would be a legacy for many generations to come if the National Portrait Gallery is able to acquire it.”

Born in Antwerp in 1599, Van Dyck was an artistic prodigy who worked as an assistant to Peter Paul Rubens. He came to Britain in 1632 at the invitation of King Charles I, making London his home until his death in 1641. Charles I was Van Dyck’s most famous patron, rewarding him with a knighthood and the title of Principal Painter. Van Dyck established himself at the heart of the English court, producing magnificent portraits of the royal family and many courtiers. However, beneath the shimmering surface of the court was a sense of growing unease. The late 1630s were a time of political upheaval and by the end of 1642 civil war had broken out in Scotland and England. Within a year of producing this portrait Van Dyck was dead, buried in Old St Paul’s Cathedral with the epitaph:”Anthony Van Dyck – who, while he lived, gave to many immortal life.”

Donations to the National Portrait Gallery’s Van Dyck Self-Portrait Appeal can be made online at www.savevandyck.org.

Van Dyck’s Self-portrait (1640-1) is displayed adjacent to the Seventeenth-Century Galleries on the Second Floor of the National Portrait Gallery, London, from today. Admission free.