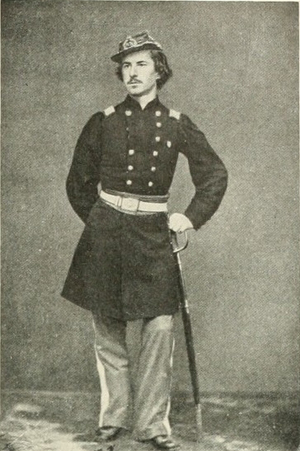 Elmer E. Ellsworth, the first Union officer killed in the Civil War, was an associate and friend of Abraham Lincoln. Image courtesy of Wikimedia Commons.

WASHINGTON (AP) – The Smithsonian’s National Portrait Gallery in Washington is opening the first of seven exhibits to mark the 150th anniversary of the Civil War.

On Friday, the museum opened “The Death of Ellsworth.” It features a historic painting of Col. Elmer E. Ellsworth, who was the first Union officer to be killed in the Civil War. Ellsworth commanded a volunteer regiment that invaded northern Virginia in 1861.

Ellsworth was killed by a local innkeeper in Alexandria, Va. The death made national headlines, and Ellsworth was made a martyr to inspire the North during the war.

Objects on view include the painting, Death of Ellsworth, by Alonzo Chappel, as well as memorial lithographs produced in Ellsworth’s honor.

The museum will mark each year of the war with rotating exhibits.

Copyright 2011. Associated Press. This material may not be published, broadcast, rewritten, or redistributed.