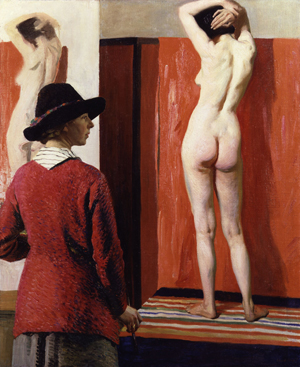 LONDON – The National Portrait Gallery will be holding a major exhibition of portraits this summer by Dame Laura Knight (1877-1970), one of the leading British artists of the 20th-century.

The exhibition spans her life-long career and celebrates the centenary of the creation of Knight’s innovative Self Portrait. The exhibition will include commissioned portraits alongside those made with members from specific social groups such as circus performers and Gypsies. Other highlights will include works from Cornwall, the ballet and war portraits. Together these portraits will show a distinctive picture of 20th-century Britain.

Born Laura Johnson, she became the youngest pupil to attend the Nottingham School of Art aged just 13. In 1903 she married the artist Harold Knight and moved to the artists’ community at Newlyn, Cornwall during 1907-8. Here the Knights found early success with their works. Laura found the light and landscape inspiring and worked en plein air in an Impressionist style. Sitters from this period include the artist Lamorna Birch and poet W.H. Davies. She also produced her important Self Portrait at this time, which includes her friend, the ceramicist and enamelist Ella Naper, posing as the model. As a student she had been denied access to nude models and in this painting Knight asserts herself as a serious professional artist committed to painting the figure.

In the 1920s Knight became famous for her backstage depictions of actors and dancers at the Ballets Russes during the postwar London season. She also gained privileged access backstage at London’s theaters. Sitters from this period include prima ballerina Lydia Lopokova and the actress Dame Gwen Ffrangcon-Davies. In 1926 Laura and Harold traveled to Baltimore, where Harold was invited to undertake several commissions at the John Hopkins Memorial Hospital. Laura obtained permission to work in the hospital wards making drawings of the patients, including highly sensitive drawings of the children she met there. In the following decade she traveled for several months with Bertram Mills and Great Carmo’s touring circus painting the performers in and out of the ring.

Knight registered her support for the aims of the Artists International Association and contributed to the Artists against Fascism and War exhibition in 1935. In the mid-1930s she spent a number of years painting Gypsies at the Epsom Races and, through the friendships she established there, was invited to a Gypsy settlement in Iver, Buckinghamshire. She visited every day for several months producing some of her most psychologically penetrating portraits, which represent several members of the same family. The romance of the Gypsies had been explored earlier in the century by artists including Sir Alfred Munnings and Augustus John. Knight sought to understand and portray the individual characters of her sitters and to depict their experience with particular sympathy having spent time within this close-knit community.

During World War II Knight produced a remarkable group of portraits of female members of the auxiliary air force and munitions workers for the War Artists Advisory Board. These works were aimed to attract further female recruits and her subjects were women who had achieved particular distinction in their field or decoration for great acts of courage. One of Knight’s most famous works from this period Ruby Loftus screwing a breech-ring (Imperial War Museum) will be on display. Knight’s painting of the Nuremberg Trials is one of her most remarkable achievements. Painted when she was in her late 60s, when she had been appointed war correspondent, the multifigure scene represents the view from the press box in the courtroom.

“Dame Laura Knight created superb portraits which are a key part of 20th-century British art. I am delighted that the National Portrait Gallery is staging the first exhibition dedicated to this work and would like to thank the Dame Laura Knight Estate for helping make this possible,” said Sandy Nairne, director of the National Portrait Gallery, London.

The exhibition is curated by Rosie Broadley, associate curator of the National Portrait Gallery, London.

“Laura Knight was one of the most famous and popular painters in Britain in the 20th century. She rose to the top of her profession, becoming a role model for many career-minded women. Tirelessly seeking new challenges, Knight tackled a diverse range of subjects including ballet and circus performers, factory workers and Gypsies. Her portraits demonstrate her great technical range and sympathetic approach to subjects, who were often on the margins of conventional society,” said Broadley.

The exhibition runs from July 11 until Oct. 1. at the National Portrait Gallery, London 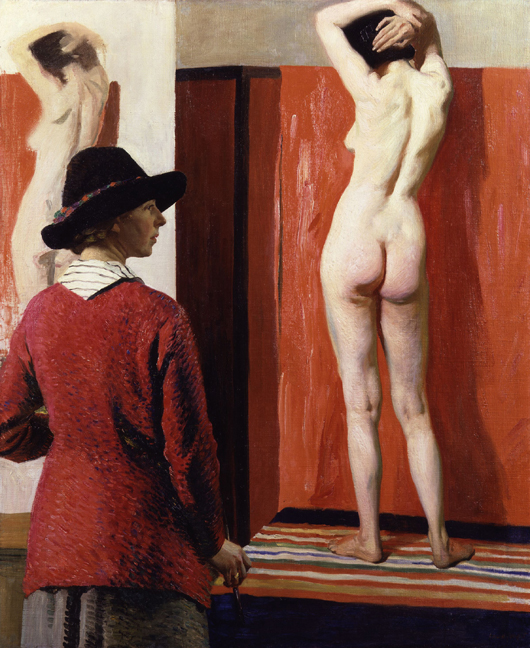 Portrait of British suffragette on display at London museum