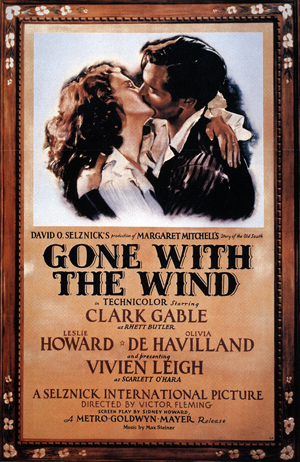 Prerelease poster for the film ‘Gone with the Wind.’ Image courtesy Wikimedia Commons.

RALEIGH, N.C. (AP) – Sprinkled throughout an exhibit of memorabilia from the movie Gone with the Wind at the N.C. Museum of History are reminders that racial attitudes during the era when the film was released had not changed much since the period shown on screen.

The exhibit, “Real to Reel: The Making of Gone with the Wind,” opens Friday. On display are 120 items from the personal collection of Jim Tumblin, a former head of the Universal Studios makeup and hair department who lives in Oregon and Hawaii.

It includes costumes, Vivien Leigh’s Academy Award and the storyboards created by William Cameron Menzies. Curator Katie Edwards also notes the ugliness of the times, such as the original segregation of the set in Culver City, Calif., and the banning of the black actors from the December 1939 premiere in Atlanta.

Selznick decided early on not to mention the Ku Klux Klan in the movie, Wilson said, and the n-word also wasn’t used. Hattie McDaniel, who played Mammy, and Butterfly McQueen, who played Prissy, were three-dimensional characters, which was unusual for the times, yet they also were stereotypes, he said.

The curator’s notes highlight aspects of the era in which the movie was filmed, including this one: The Culver City, Calif., set was segregated until an extra complained about the separate bathrooms to Clark Gable, who said the actors would quit if it continued.

The stars of the show are the clothes: Scarlett O’ Hara’s dress from the Shantytown scene, Bonnie Blue’s velvet dress from her final scene, Belle Watling’s burgundy velvet jacket and fur muff, and the uniform that Ashley Wilkes wore when he returned home at the end of the Civil War.

The Shantytown dress was Tumblin’s first acquisition after he saw it on the studio floor and learned it was going to be thrown away. He bought it and a rack of clothes from other movies for $20. He paid $8,500 for his next item, Scarlett’s straw hat from the Twelve Oaks barbecue, and $500,000 for Leigh’s Academy Award.

The exhibit also includes a copy of the script that Selznick gave McDaniel, who became the first black person to win an Academy Award, and a copy of Gone with the Wind that Tumblin owned. 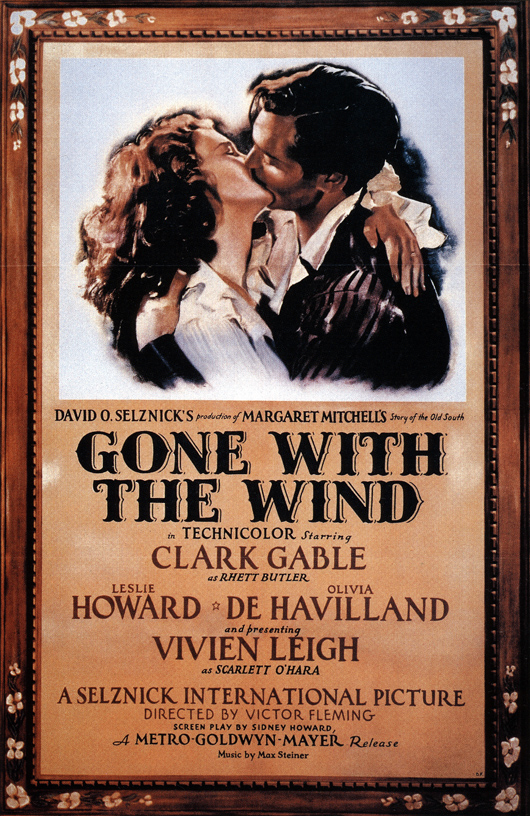 Prerelease poster for the film ‘Gone with the Wind.’ Image courtesy Wikimedia Commons.