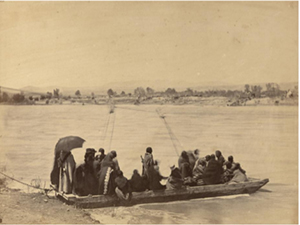 KANSAS CITY, Mo. –Two series of extremely rare photographs documenting a last look at a rapidly disappearing frontier are on view at The Nelson-Atkins Museum of Art in Kansas City beginning July 25. Across the Indian Country: Photographs by Alexander Gardner, 1867-68 opens July 25 and was curated by Jane L. Aspinwall, Associate Curator of Photography at the Nelson-Atkins. The exhibition includes photographs from two extraordinary bodies of work created by Gardner, Across the Continent on the Kansas Pacific Railroad, 1867-68 and Scenes in the Indian County, 1868 which depict the transformation of the American West by the railroad and the subsequent effect it had on the American Indians in the region. The exhibition is accompanied by a catalogue written by Aspinwall, Alexander Gardner: The Western Photographs 1867-1868, available at the museum store.

“These photographs are groundbreaking,” said Julián Zugazagoitia, Menefee D. and Mary Louise Blackwell CEO & Director of the Nelson-Atkins. “Gardner captured images of Indian life that had rarely, if ever, been photographed. Wrapped in blankets, carrying peace pipes, many of the Indian chiefs were truly interested in peace only to be met with empty promises. These images are poignant and wistful—documenting the rich culture of a rapidly marginalized Indian population.”

Nine of the photographs are from the Nelson-Atkins collection; the rest are on loan from various institutions. Many come from state historical societies that rarely have exhibition space, so most have never been seen by the public before.

“Gardner’s photographs emphasize his personal vision that all people, native and non-native, could live together harmoniously,” said Aspinwall. “The survey photographs of the Western landscape are extraordinary and provide a rare glimpse into the transformation of the American frontier, including some of the earliest images taken of the state of Kansas.”

Alexander Gardner emigrated from Scotland to the United States in 1860 and worked at the New York City studio of Mathew Brady, coming into contact with numerous politicians and military figures. After the outbreak of the Civil War, Brady sent his team of photographers, including Gardner, into the field to photograph the conflict. Gardner left Brady’s studio in 1862 to open his own in Washington, D.C.; he was also employed by General McClellan as official photographer of the Army of the Potomac.

After the war, Gardner photographed many notables including President Lincoln, the Lincoln conspirators, and Indian delegations visiting Washington. In 1867, Gardner joined the survey team for what became the Kansas Pacific Railroad. The railroad was promoting plans for an extension of its route from Kansas to the Pacific Ocean. Gardner’s photographs of the existing line through Kansas and then of the proposed route, through the mountains of Colorado and deserts of New Mexico, Arizona, and California, emphasize the ease of future railroad construction and the potential for economic development, while including studies of the Indians and settlements along the way. Gardner’s prints represent the earliest systematic series of photographs of the Great Plains.

The survey photographs make up about half of the exhibition; the other half includes images taken during treaty negotiations between the Plains Indians and the Indian Peace Commission at Fort Laramie, Wyoming in 1868. Gardner photographed many of the chiefs from the Northern Plains tribes including Crow, Arapaho, Oglala, Minneconjous, Brule and Cheyenne. The images are remarkable both for the variety of tribes represented and for the candid documentation of everyday Indian life, including Indian encampments, burial trees and peace proceedings. Gardner’s photographs marked the rapid and disastrous changes in the lives of the Plains Indians as they were happening, signaling the end of the “wild frontier.”

About the Nelson-Atkins Museum of Art:

The Nelson-Atkins in Kansas City is recognized nationally and internationally as one of America’s finest art museums. The Nelson-Atkins serves the community by providing access and insight into its renowned collection of more than 33,500 art objects and is best known for its Asian art, European and American paintings, photography, modern sculpture, and new American Indian and Egyptian galleries. Housing a major art research library and the Ford Learning Center, the Museum is a key educational resource for the region. The institution-wide transformation of the Nelson-Atkins has included the 165,000-square-foot Bloch Building expansion and renovation of the original 1933 Nelson-Atkins Building.