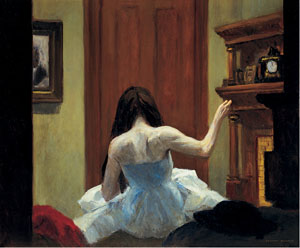 NEW YORK (AP) – The American artist Edward Hopper painted cityscapes without people, and the individuals he depicted were shown in settings so bleak they often seemed like the last humans on Earth.

Hopper built an enduring reputation as one of the 20th century’s greatest painters of solitude, even loneliness, but in his professional life, Hopper did not work alone.

That is the central point of a new exhibition about Hopper that opens this week at the Whitney Museum and examines his work in relationship to that of his contemporaries.

Although history tends to focus on great individuals, curator Barbara Haskell and assistant Sasha Nicholas have done a service for Hopper’s many fans by showing his work within the broader artistic community of his era. “Modern Life: Edward Hopper and His Time” features about 85 works in a range of media by Hopper and his associates, including some of Hopper’s rarely exhibited early paintings and works on paper.

We get a clear sense of the rapidly urbanizing world in which Hopper made some of his most iconic works, beginning with the bustling streets of New York City at the turn of the 20th century and later, the small-town vistas around Cape Cod in Massachusetts.

Hopper, who was born in 1882, arrived in New York in 1900 in the middle of an artistic revolution. The stuffy conventions of genteel society were on their way out. A new generation of painters, led by Robert Henri, was transfixed by the drama of modern, urban life. They were dubbed the Ashcan School for their willingness to paint what they saw on the street.

With loose, impressionistic brushwork, these artists captured the rough-and-tumble of the city with its smoke-belching machinery and raucous entertainment for the masses.

Photographers were also intent on documenting what they saw around them, including the sometimes horrific living conditions of New York’s working class and immigrant neighborhoods. Like the realist painters, the photographers were in love with the stark geometry of the city’s soaring suspension bridges and skyscrapers, and the dramatic effects of light and shadow across the urban landscape.

Two of Hopper’s paintings of New York’s busy waterfront are displayed near Alfred Stieglitz’s famous photograph of steamship passengers in steerage. The work of other legendary photographers including Paul Strand, Edward Steichen and Lewis Hine is also on view, offering opportunities to compare how artists in two different media compose their pictures.

Hopper shared many of the interests and concerns of his contemporaries, yet his work stood apart. In the 1920s and 1930s, Precisionist painters such as Charles Demuth and Ralston Crawford were mesmerized by the geometric shapes of urban architecture. Hopper was, too, but one famous work from that period, “Early Sunday Morning” _ a row of red brick buildings on Seventh Avenue _ does something uniquely Hopper. There are no people in the painting, yet the warm light and neat signs on the glass-windowed storefronts evoke the ghostly presence of humanity.

Central to Hopper’s work is this profound sense of isolation. He managed like almost no other to convey the essence of the modern experience _ what it’s like to be alone in a crowd.

One of his earliest champions was Gertrude Vanderbilt Whitney, whose advocacy of Hopper and other early American modernists led to the founding of the Whitney Museum. Though the museum has often presented Hopper’s work, this is the first exhibition to focus on the context in which he worked. 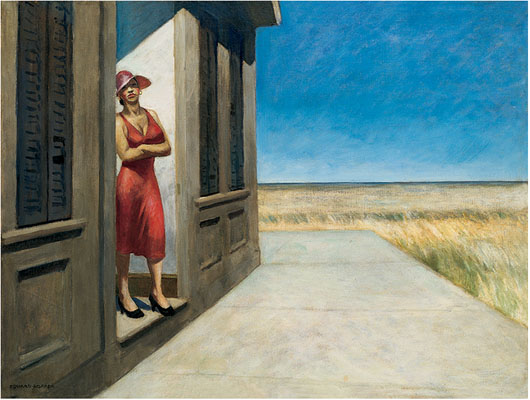 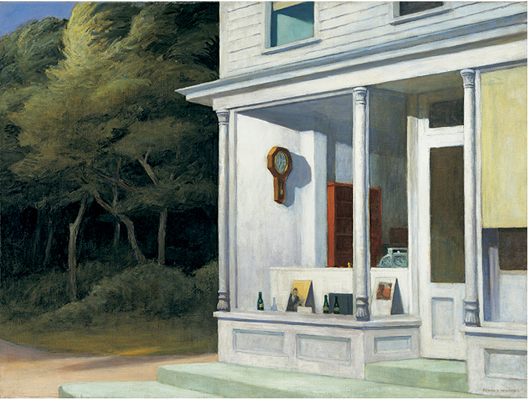