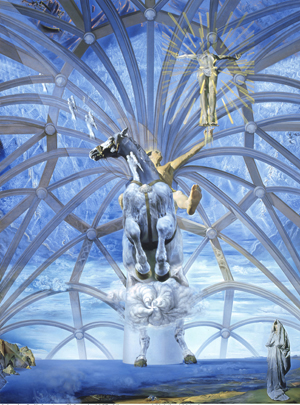 ATLANTA (AP) – A new exhibition opening exclusively in Atlanta explores artist Salvador Dali’s late work, including several major pieces that haven’t been seen in the U.S. in half a century.

Dali is best known as a surrealist, his melting watches an iconic image of that movement. But after about 10 years, his relationship with that group grew strained in the late 1930s for a variety reasons both artistic and political. “Salvador Dali: The Late Work,” opening at the High Museum of Art in Atlanta on Saturday, focuses on the period from 1940 to 1983.

“It’s become a really interesting area for investigation because you have Dali’s career which spans almost all of the 20th century, but historically people have really only looked at the 1930s,” said exhibition curator Elliott King. “It was almost like he died in 1940.”

Dali declared himself a classic painter in 1941, and while many critics disparaged his later work as kitsch or too commercial, the general public may not be able to discern much difference between the surrealist period and the later works, King said.

“Even though Dali was defining his work as a radical separation and a lot of critics really began taking that divide up to define late Dali, there are a lot of interesting continuities that kind of work through the whole,” he said.

For that reason, King said, the new exhibition works on multiple levels. For Dali newcomers, it provides an introduction to the deep imagination and showmanship of the Spanish artist. For those who know Dali well, it may challenge perceptions of his later work and provide a glimpse of works not seen before.

The exhibit opens with photos by American photographer Philippe Halsman of the mustachioed artist in crazy poses showcasing what King describes as Dali’s “wacky showman” side. It then moves into some earlier works to give visitors some background.

From there, it progresses to Dali’s exploration of “nuclear mysticism,” which reflects two recurring influences on Dali’s late work _ his return to the Catholic Church and nuclear physics.

A perfect example of this concept is The Madonna of Port-Lligat, which shows the Madonna and Child fragmented and breaking into particles. The large-scale painting is on loan from a museum in Japan and hasn’t been seen in the U.S. since 1951.

Another impressive piece that illustrates this theme is Santiago El Grande, an homage to Saint James, the patron saint of Spain, which features Dali’s vision of the crucifixion and a horse rearing up above an atomic explosion.

Designed as an altarpiece, King said the painting is best viewed from below, lying on the floor and looking up. (Though, for safety reasons, the High would prefer visitors just crouch.) On loan from the Beaverbrook Art Gallery in New Brunswick, Canada, the painting hasn’t traveled since 1959.

One of the most famous images in the exhibition is Christ of St. John of the Cross, stunning in part for its vantage point _ looking down from above on the crucified Christ. On an adjacent wall is a photo of Dali with Bobby Kennedy in front of the painting in 1965, the last time the painting voyaged to the U.S. from its home in Scotland.

A treat for Dali fanatics is Assumpta Corpuscularia Lapilazulina, which has been in private collections and hasn’t been viewed publicly since 1959. The large painting features Dali’s wife, Gala, as the Virgin Mary dematerializing into Heaven.

“It’s something that I’ve written a lot about, but I’d never seen it before it came here,” King said. “I was so excited to actually see it come out of its shipping crate.”

One of King’s goals with the exhibition was to bring together several significant paintings that haven’t been seen in the U.S. in many decades – or, in some cases, not at all.

“A lot of these paintings are pilgrimage sites of their own,” he said. “I thought if we could get one of them, we’d be in really good shape, and we ended up getting four.”

The final section of the exhibition centers on what King calls Dali’s pop art, which came well before similar commercial efforts by artists like Andy Warhol and Jeff Koons.

There are brooches so gaudy they look like costume jewelry; a chess set in which all the pieces are molds of his fingers, except the rooks which are copies of the salt shakers from the St. Regis hotel; and portraits of American high society figures.

A 1960 film, Chaos and Creation, in which Dali used a motorcycle, popcorn and pigs to create an abstract painting, may be the first example of video art, King said.

The last gallery houses a hologram of rock star Alice Cooper and The Sistine Madonna painting from 1958 that superimposes the image of the Virgin and Child over a photograph of the Pope’s ear rendered in a benday dot pattern, preceding similar pop art works.

A wall of two dozen magazine covers – just a fraction of the many he appeared on over the years – demonstrates his status as a true celebrity artist. 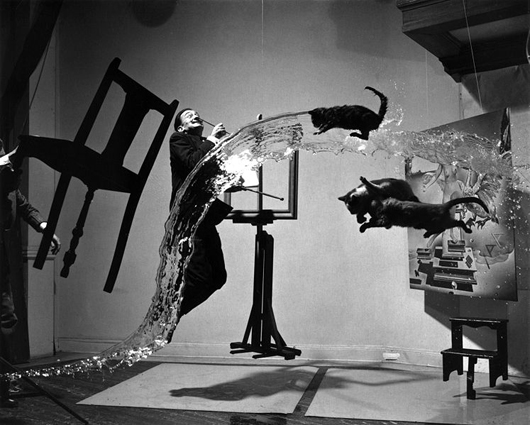 American photographer Philippe Halsman began collaborating with the surrealist artist Salvador Dalí in the late 1940s. The 1948 work shown here, titled Dali Atomicus, explores the idea of suspension, depicting three cats flying, water thrown from a bucket, an easel, a footstool and Salvador Dalí all seemingly suspended in mid-air. The title of the photograph is a reference to Dalí’s work Leda Atomica (which can be seen in the right of the photograph behind the two cats.). Image fro Library of Congress Prints and Photographs Division Washington, D.C. 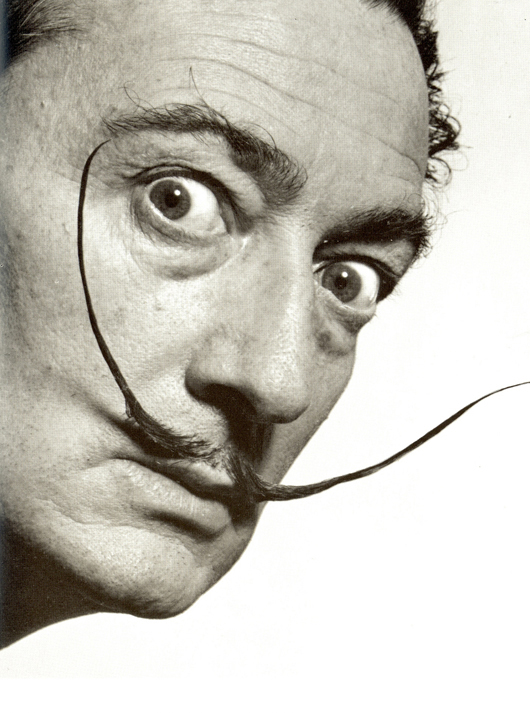 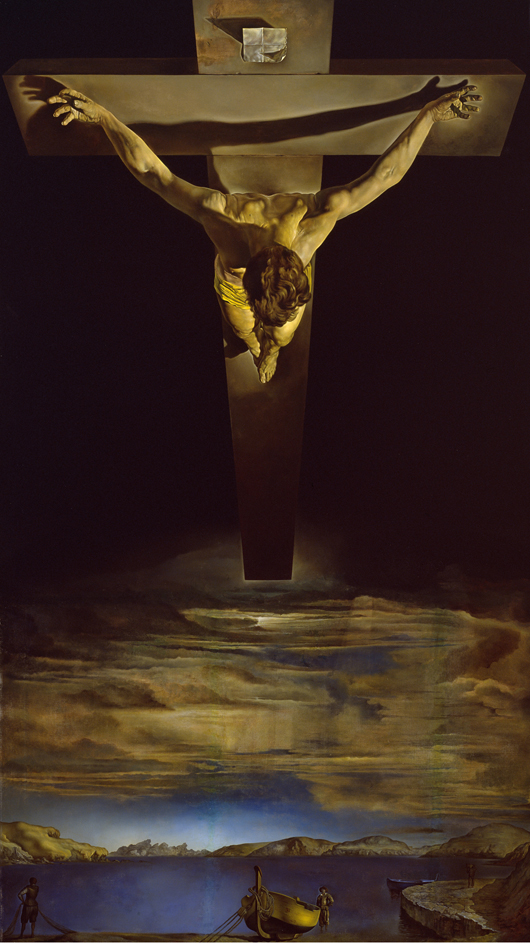