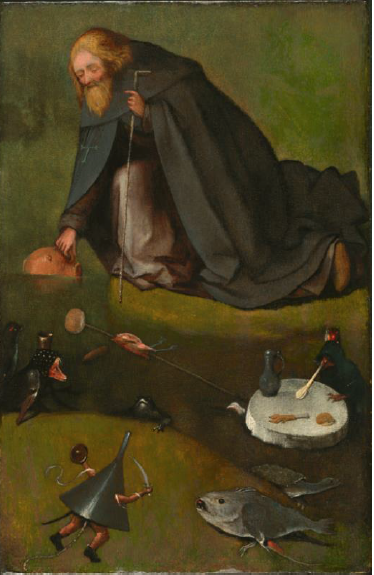 KANSAS CITY, Mo. – For the first time since its reattribution, Hieronymus Bosch’s The Temptation of St. Anthony will go on view at The Nelson-Atkins Museum of Art in Kansas City on June 30. It will be shown with Christ Crowned with Thorns, an early Netherlandish painting recently confirmed as an autograph work by Albrecht Bouts. Both panels came into the Nelson-Atkins collection as original compositions, but scholars subsequently thought they were by assistants or followers. Stylistic analysis as well as the use of scientific techniques demonstrated that the paintings were consistent with other known works by the artists. What Lies Beneath: Rediscovering Hieronymus Bosch and Albrecht Bouts is the first time the two paintings will be shown to the Kansas City public since the confirmation of their attributions.

“The significance of these two recent attributions, made possible through scientific and scholarly research, cannot be overstated,” Julián Zugazagoitia, Menefee D. and Mary Louise Blackwell CEO & Director of the Nelson-Atkins. “We are delighted to celebrate these transformative achievements with Kansas City and the international arts community as we see these paintings with new eyes.”

The Temptation of St. Anthony was lent in February 2016 to Het Noordbrabants Museum in Den Bosch, The Netherlands, which is Bosch’s hometown, for a major exhibition commemorating the 500th anniversary of the artist’s death. For several years prior to that exhibition, the Bosch Research and Conservation Project (BRCP) had been conducting extensive research into Bosch’s work. Intrigued by certain details in the panel, they traveled to Kansas City in September 2015 to study The Temptation of St. Anthony in person. With the assistance of Rima Girnius, Associate Curator of European Painting, and Scott Heffley, Senior Conservator, Paintings, they performed a series of tests to make their final determination.

The team examined the painting using infrared imaging techniques, which revealed an underdrawing that proved to be crucial in determining that the panel was painted by Bosch rather than a member of his workshop. This preparatory sketch, executed with quick liquid brushstrokes, was similar to other undisputed works by Bosch.

The BRCP team also discovered that the panel is a fragment of an originally much larger one. St. Anthony is the principal figure in what the team believes is the wing of a dismantled triptych. Because of the immense volume of documentation produced by the BCRP providing artistic context, the painting “can now be ascribed to Bosch with confidence,” according to the team.

Christ Crowned with Thorns was most recently requested for the 2017 exhibition Blood and Tears–Albrecht Bouts and the Face of Passion, organized in collaboration with the Royal Institute for Cultural Heritage in Brussels. The exhibition opened at the National Museum of History and Art Luxembourg before traveling to the Surmondt-Ludwig-Museum in Aachen, located in northern Germany. The curator of Blood and Tears, Valentine Henderiks, is the world’s leading scholar on Albrecht Bouts and long suspected that the painting was by Bouts rather than someone affiliated with the artist, and said as much in her catalogue raisonné. Careful study of the painting and comparisons with works produced by the artist and his workshop confirmed her earlier impression. 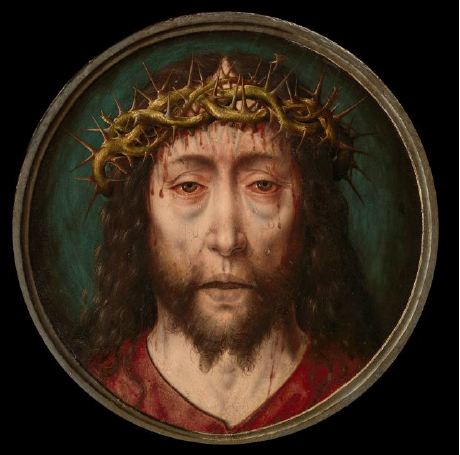 Albrecht Bouts (1451/55-1549) was the youngest son of Dirk Bouts (1415-1475) and was trained in his father’s studio in Leuven. He inherited his father’s workshop in 1475 and ran it until his death in 1549. Albrecht specialized in painting portraits of Christ, the Holy Virgin and Saint John the Baptist for quiet contemplation.

“Christ Crowned with Thorns is a very graphic, very beautiful representation of Christ,” said Girnius. “Details such as the rivulets of blood streaming down his face and the thorns piercing his skin would have encouraged the devout to identify with the suffering of Christ, allowing them to develop a more personal connection with the divine.”

Images such as Bouts’ Christ Crowned with Thorns reflected the popularity of religious movements that emphasized the private, devotional function of images. This painting is one of five similar portraits of Christ developed by Bouts and reproduced by his workshop in large numbers.

What Lies Beneath: Rediscovering Hieronymus Bosch and Albrecht Bouts will focus on scholarly and scientific techniques used to authenticate the attributions of the paintings. Text panels and images will be used to help visitors gain a deeper understanding of the paintings, the artists and their working methods. This presentation will be held in renovated gallery space on the Plaza level of the Nelson-Atkins building, continuing the expansion and reclaiming of exhibition space within the museum’s existing walls.