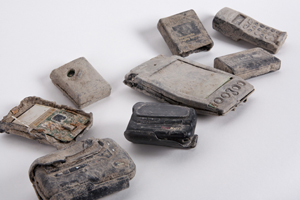 These cellphones and pagers were found in the rubble of the collapsed World Trade Center towers in New York. Recovery workers reported that the phones rang for days after the crash as people searched for missing relatives and friends. Sarah Mercier/Newseum/FBI Tour

WASHINGTON — In the decade before 9/11, a period when terrorists bombed the World Trade Center for the first time in 1993 and then U.S. embassies in Africa, most Americans had never heard of Osama bin Laden.

Even when he declared war on the United States in a television interview, bin Laden remained a stealth-like figure and his importance largely unknown.

Many clues that were later uncovered about the 9/11 mastermind’s activities, which have been stored in the FBI’s evidence lockers, are now going on public view for the first time Friday at the Newseum in Washington. The journalism museum is expanding its current FBI exhibit with a new section, “War on Terror: The FBI’s New Focus.”

Among 60 new artifacts on view are engines and landing gear from passenger planes that crashed into the World Trade Center and hiking boots that would-be bomber Richard Reid rigged in December 2001 to explode aboard an airliner. Ten years after the attacks, the Newseum said it was time to examine the impact.

“They call it evidence, we call it artifacts,” said Susan Bennett, a Newseum vice president who oversees exhibits. “Just as we have the Berlin Wall as a reminder of the Cold War and the collapse of communism, we think it’s important to use these artifacts to tell the story of 9/11 and how it changed our lives.”

The FBI loaned an extensive collection for the exhibit, which will be on display through the end of 2012. The Newseum will offer free admission on the weekend of Sept. 10-11 to mark the anniversary. Newseum exhibits director Cathy Trost said the objects would “connect people emotionally to the story.”

It begins with the handcuffs used to restrain Ramzi Yousef, who was convicted in 1997 of the first World Trade Center bombing that killed six and injured more than 1,000, and details of how bin Laden was added to the FBI’s 10 Most Wanted list in 1999.

Jet engines found blocks away from the World Trade Center hang as a stark reminder of the planes used as weapons to kill nearly 3,000 people.

In New York, 2,753 people were killed as a result of the attacks at the World Trade Center, while 184 were killed at the Pentagon in northern Virginia and 40 were killed in the crash of United Airlines Flight 93 in Pennsylvania.

There are personal items on view, such as a wallet of Ruth McCourt of New London, Conn., who was taking her 4-year-old daughter Juliana to Disneyland on United Flight 175 before it crashed into the south tower of the World Trade Center, and cell phones found in the rubble that rung for days after the attacks as family members tried desperately to find their loved ones.

“You take that family and multiply it by 3,000 and you begin to understand and comprehend the enormous tragedy,” Bennett said.

A rake and a shovel used by FBI investigators to comb through debris at the Pentagon crash site also is on view, while other items from the Pentagon and the Pennsylvania crash site will go on view Saturday at the Smithsonian’s National Museum of American History.

While the Newseum exhibit details how the FBI and others were criticized for failing to share intelligence before the attacks, the agency decided to make the items public for the first time to show how the FBI has changed to fight international terrorism, said Dan McCarron, an FBI liaison to museums.

Some of the changes came quickly. By December 2001, Reid, the would-be shoe bomber who tried to ignite explosives in his hiking boots during a flight from Paris to Miami, was restrained by passengers and the crew when his intentions became clear.

On view are the hiking boots Reid packed with explosives, as well as the belts that passengers used to strap him into his seat and a syringe used by a doctor on the plane to sedate him.

“The Reid case, for instance, really shows how everyone even that soon was working together,” said the FBI’s McCarron. “Someone put a bomb in a shoe and not long after, airports were making us take off our shoes.”

The exhibit also includes video interviews with FBI agents and former ABC News correspondent John Miller, the last Western reporter to interview bin Laden in 1998 just two months before two U.S. embassies were bombed in Africa, killing 224 people, including 12 Americans. In the video, Miller recalls having guns held to his face before the interview.

“You very quickly think, ‘Am I going to die here … to interview some guy no one has ever heard of?’” he said.

The Newseum expects to host thousands of visitors during the weekend of the 10th anniversary of the attacks. It will have kiosks for visitors to share their remembrances and will show televised ceremonies planned in New York and Washington. It will also display comic strips planned by 93 cartoonists for Sept. 11 newspapers with 9/11 themes, as will museums in San Francisco, Pittsburgh and New York City.

Copyright 2011 The Associated Press. All rights reserved. This material may not be published, broadcast, rewritten or redistributed. 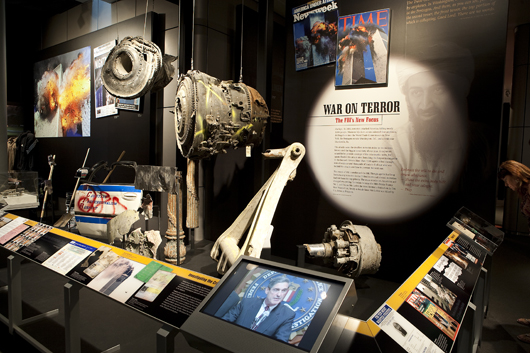 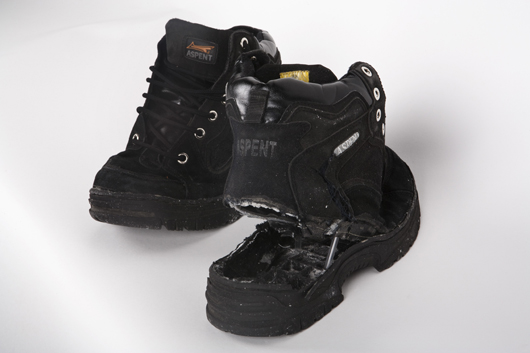 These are the hiking boots laced with explosives that Richard Reid attempted to ignite during a flight from Paris to Miami in December 2001. An al-Qaida bomb-maker crafted the shoe bombs, concealing the explosives in the soles. Had Reid succeeded, the explosion could have blown a hole in the plane’s fuselage. Sarah Mercier/Newseum/FBI Tour

Newseum has been showcasing front pages for 19 years