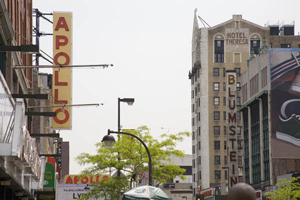 The site of the proposed National Jazz Museum is across from the Apollo Theater in Harlem, shown in this photograph. In the background, the Hotel Theresa is visible, as is Blumstein’s department store, the first business along 125th Street to employ blacks as salespeople. Photo by Stern, 2006, licensed under the Creative Commons Attribution-ShareAlike 2.5 License.

NEW YORK (AP) – New York City is seeking a developer to build a new home for the National Jazz Museum at a city-owned lot across the street from Harlem’s Apollo Theater.

The city’s Economic Development Corp. issued a request for proposals on Monday seeking a developer for the project.

The site was the former home of Mart 125, a market where vendors rented space. It closed in 2001.

The developer will be responsible for demolishing the existing structure as well as leasing the rest of the building once it’s completed.

Submissions are due July 30.