PORTLAND, Maine (AP) – Four art museums, all located in Maine, are entering the new year seeking new top executives. The Portland Museum of Art, Farnsworth Museum of Art in Rockland, Ogunquit Museum of American Art and Bowdoin College Museum of Art in Brunswick are all operating with interim directors.

The biggest of the four is the Portland Museum of Art, which has been without a permanent director since Daniel E. O’Leary retired last spring. There’s no timetable for naming a successor at the museum, which lures 150,000 visitors a year and has a budget of $4.5 million.

Michael Conforti, president of the Association of Art Museum Directors, says the situation in Maine is a fluke and doesn’t suggest any particular trend.

Council officials in Brighton, southern England, say the remains are due to be taken back to Australia but has not said when. They say the Australian government has agreed to meet the bill for their transport.

The council says the bones were donated to the Booth Museum of Natural History nearly 100 years ago and have little in the way of research value.

END_OF_DOCUMENT_TOKEN_TO_BE_REPLACED

WASHINGTON (AP) – The Smithsonian Institution is receiving $700,000 for the inauguration.

The Presidential Inaugural Committee has announced that it is donating the money to fund security, maintenance and special programs at the museum complex on Inauguration Day.

Among other things, the money will allow the National Museum of American History and the Castle building to open at 8 a.m. on Inauguration Day, two hours earlier than normal.

LOS ANGELES (AP) – The financially troubled Museum of Contemporary Art in Los Angeles has accepted a bailout from billionaire Eli Broad worth as much as $30 million.

In a deal to be announced Tuesday, Broad has promised to match donations to the museum’s endowment up to $15 million, and to give $15 million over five years toward exhibitions, Broad and museum board members said.

The museum – better known as MOCA – has a respected collection of works produced since 1940, but has recently suffered from severe money shortages.
END_OF_DOCUMENT_TOKEN_TO_BE_REPLACED 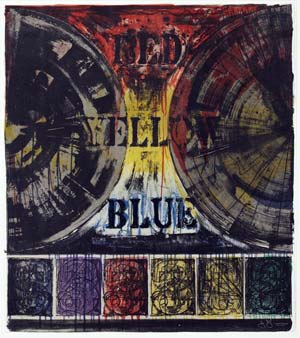 NEW YORK (AP) – The Museum of Modern Art has mounted a new Jasper Johns show that makes the case for the artist as recycler.

The occasion for the show, which opened Friday, is the museum’s recent acquisition of a series of 13 works on paper by the great American artist best known for his iconic flag paintings.

The survey draws on MoMA’s extensive collection of Johns’ art to explore the way he reused and re-imagined themes and patterns again and again over his long and prolific career.

END_OF_DOCUMENT_TOKEN_TO_BE_REPLACED 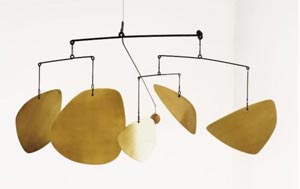 Made of brass, this signed and dated 47 hanging mobile by Alexander Calder is more than 8 feet wide. It sold for more than $2.4 million at a Sotheby’s New York auction Nov. 9, 2005

NEW YORK (AP) – An art exhibit can be hard to interest children in unless, like the Alexander Calder show at the Whitney Museum of American Art, it’s full of toys, animals, circus paraphernalia and big, moving objects made of wires, rods and balls.

Adults are just as likely to be entertained and enthralled by this kid-friendly show, which traces the development of Calder’s world famous mobiles during seven formative years he spent as a young man in New York and Paris.

The son of two artists, an 11-year-old Calder presented his parents with sculptures of a dog and a duck fashioned out of brass. He graduated in 1919 with a degree in mechanical engineering from Stevens Institute of Technology in New Jersey. But the young man could not escape his destiny.

END_OF_DOCUMENT_TOKEN_TO_BE_REPLACED

WASHINGTON (AP) – George and Martha Washington, Dorothy from The Wizard of Oz and other costumed characters greeted thousands of visitors Friday as the National Museum of American History reopened after a two-year, $85 million renovation.

Former Secretary of State and retired Army Gen. Colin Powell read President Abraham Lincoln’s Gettysburg Address to a crowd of at least 200 people on the museum’s steps before the doors opened.

“It is the 19th of November, 1863,” Powell said after the blare of horns announced the start of the famous speech. “Four score and seven years ago, our fathers brought forth on this continent a new nation, conceived in liberty, and dedicated to the proposition that all men are created equal.”

The museum opens “a new era of education and inspiration,” Smithsonian Secretary Wayne Clough said. “We aspire to tell the story of America and of Americans to ourselves and to the world.”

The museum opened a three-day festival with the firing of a cannon from the era when The Star-Spangled Banner poem was written in 1814. Set to the British tune To Anacreon in Heaven, the poem became the U.S. national anthem.

Inside, visitors found favorite exhibits, such as Kermit the Frog, and a gallery devoted to the American presidency, where President-elect Barack Obama’s picture already has been added to a timeline of presidents. Several people gathered around the small photo to take pictures with their cell phone cameras.

“He’s already on here! It’s exciting,” said Amelia Castelli, 26, who was visiting from Florida and spent several minutes getting the right snapshot of Obama’s picture.

Her goal for the day lay elsewhere.

“What I wanted to see were Dorothy’s ruby red slippers,” Castelli said. “That’s the only thing I really remember from being here years ago.”

Museum officials plan to have costumed historic characters on hand every weekend and daily during the busy summer months. George Washington greeted many children on the opening day, teaching them to bow “as we do in Virginia,” he said, rather than shake hands.

Sometimes called America’s attic, the Smithsonian is a collection of more than one dozen museums, including the National Museum of American History, plus the National Zoo. It resulted from a bequest of Englishman James Smithson, a scientist who died in 1832. His will said, without explanation, that the money should be used to build in Washington “an establishment for the increase and diffusion of knowledge among men.” He had never been to the United States.

ROME (AP) – The Cleveland Museum of Art agreed Wednesday to return 14 ancient treasures ranging from Etruscan jewelry to a Medieval cross that authorities say were looted or stolen from Italy.

Italian Culture Ministry officials and the director of the Cleveland museum signed a deal in Rome to transfer the artifacts within three months in exchange for long-term loans of other treasures.

The agreement is the latest success in an Italian campaign to recover artifacts that survived for centuries only to be dug up by looters, smuggled out of the country and sold to prestigious museums across the world.

Similar deals have yielded the return of scores of pieces from museums, including the J. Paul Getty Museum in California and the Metropolitan Museum of Art in New York.
Director Timothy Rub stressed that the Cleveland museum had not knowingly acquired or received looted items. He said they were bought or donated to the museum in the 1970s and 1980s.

The treasures to be returned from Cleveland are mostly a sampling of art produced by the Etruscans and by Greek-influenced cultures that dominated central and southern Italy before the rise of Rome.

Among them are a pair of Etruscan silver bracelets from the 6th century B.C. and a bronze statue of a horned warrior, dated to the 9th-8th century B.C., which experts said is one of the finest remaining from a civilization that populated the island of Sardinia.

Most of the artifacts are elaborate and richly decorated pottery pieces from 5th to 4th century B.C. southern Italy.

They include vessels shaped as a donkey head, a pig and a duck as well as a 3-foot-tall vase attributed to the so-called painter of Darius – an artist named after one of his works which depicts the ancient Persian king.

The odd object in the group is a 14th century gold-plated processional cross stolen in the 1960s from a church near Siena, in Tuscany.

The artifacts were shown to have been looted mainly because photos and documents related to them turned up in raids conducted in the 1990s on the Swiss warehouses of antiquities dealers accused of controlling the flow of illegal art exports from Italy. The raids sparked what has turned into a worldwide hunt for Italy’s lost treasures.

The deal signed at the Culture Ministry came after nearly two years of negotiations that began when the museum contacted the Italians to check if Rome was seeking to recover any of its antiquities.

“When putting together a collection it is important that any museum acquire works ethically,” Rub said.

Bondi and Rub said the two sides had established a joint commission to determine within six months the provenance of two more contested pieces: a statue depicting Nike, the winged victory deity, and a bronze of the Greek god Apollo. 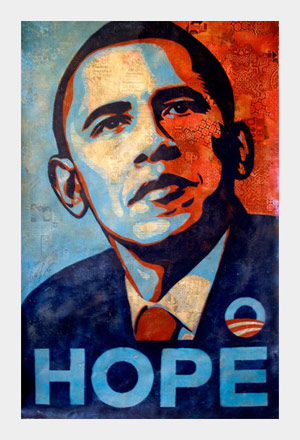 The National Museum of African American History and Culture scooped up maps, strategy boards and campaign literature from one of Obama’s campaign offices in northern Virginia shortly after the election. Curators on Wednesday thanked Obama’s Virginia staff for saving the items, which are often thrown away or taken as souvenirs after the campaign.

END_OF_DOCUMENT_TOKEN_TO_BE_REPLACED

PHILADELPHIA (AP) – Philadelphia is preparing for an exhibit of works by postimpressionist painter Paul Cezanne and the artists he influenced.

The show is called ‘Cezanne and Beyond’ and will open at the Philadelphia Museum of Art in February. It will be the exhibition’s only world viewing.

The show includes about 60 Cezanne paintings, plus paintings by Picasso, Matisse and others who were influenced by Cezanne.