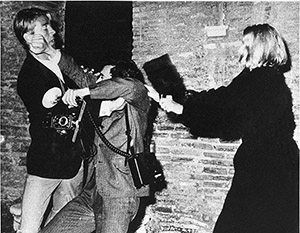 Actor Mickey Hargitay, the husband of actress Jayne Mansfield, scuffles with ‘the king of paparazzi’ Rino Barillari, while model Vatussa Vitta hits him with her purse, in a 1963 photo taken in Rome. This file is licensed under the Creative Commons Attribution-Share Alike 3.0 Unported license.

METZ, France (AFP) – Normally relegated to the bottom of the artistic heap, paparazzi are getting their own French art exhibition, just weeks after one of them managed to wreck the president’s relationship.

By turns populist and subversive, the controversial exhibition at the Centre Pompidou-Metz opens on Wednesday, featuring the snaps of French President Francois Hollande leaving the home of actress Julie Gayet on a scooter.

The photos by Sebastien Valiela, published in Closer magazine in January, led to the president dumping his longtime partner Valerie Trierweiler.

The exhibition relives other notable scandals, including a snap from 1994 of former president Francois Mitterand with his secret daughter Mazarine Pingeot, who was born to a mistress.

Valiela joked to AFP that he had also offered his latest photos of Hollande with Gayet – who have not been seen together since “le scandale.”

“But the organizers said it would not be possible. Maybe they came under pressure?”

News is not the theme of the exhibition, the Centre Pompidou-Metz said in a sober statement.

It is the first time Valiela is displaying his work, let alone in a renowned gallery. He said it was “one in the eye” for all those who look down on the genre.

“It never occurred to me that this was possible,” he said. “I don’t consider myself an artist, just a journalist. I’m not looking to make something beautiful, I’m trying to provide information in my photos.”

Unlike many journalists and celebrities, “artists have never despised us,” he added.

But Pingeot charged that Valiela was “proud of causing hurt” with his work and described the exhibition as a “form of complicity.”

“I find it extremely disturbing that this is being considered art,” she told French television station RTL. “We are witnessing an inversion of values today that is very destabilizing.”

Another featured paparazzi, Pascal Rostain, said he was “just happy and astonished” to be considered for the exhibition.

“Art is about scandal, it is about provocation,” he said. Paparazzi photos are “perhaps the last domain of photography which has not had the honor of appearing in such institutions.”

He said the artistic value stems from the constraints put on the photographers that create a specific style.

“We are forced to use extreme exposures because we do not necessarily have the light conditions we want, or there is a lot of movement as we adapt to the situation, so that gives the pictures a certain texture,” Valiela said.

The exhibition also highlights the specific locales of the genre – the backseat of the car, the beachfront, the exit door of the club or tribunal.

There are also the familiar gestures – the threatening fist, the hand over the face or the middle finger – that come when the prey spots her predator.

The ambiguous relationship between stars and paps – feeding their fame but potentially ruining their lives – is explored by looking at several icons: Elizabeth Taylor, Jackie Kennedy-Onassis, Brigitte Bardot, Princess Diana, Paris Hilton and many more.

Of the 600 photos, half come from artists who have been inspired by paparazzi since the 1960s, from Andy Warhol to Gerhard Richter.

A great admirer of paparazzi, fashion photographer Helmut Newton once described the shots of Jackie Kennedy-Onassis naked on a Greek beach as “among the most troubling of the century.”

Some have made the leap from pap to respected artist, like the veteran Ron Galella.

Rostain and his assistant Bruno Mouron gained renown for their series “Trash” featuring the contents of celebrities’ rubbish bins. 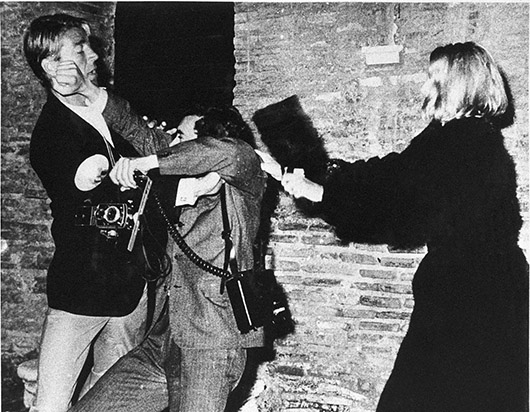 Actor Mickey Hargitay, the husband of actress Jayne Mansfield, scuffles with ‘the king of paparazzi’ Rino Barillari, while model Vatussa Vitta hits him with her purse, in a 1963 photo taken in Rome. This file is licensed under the Creative Commons Attribution-Share Alike 3.0 Unported license.