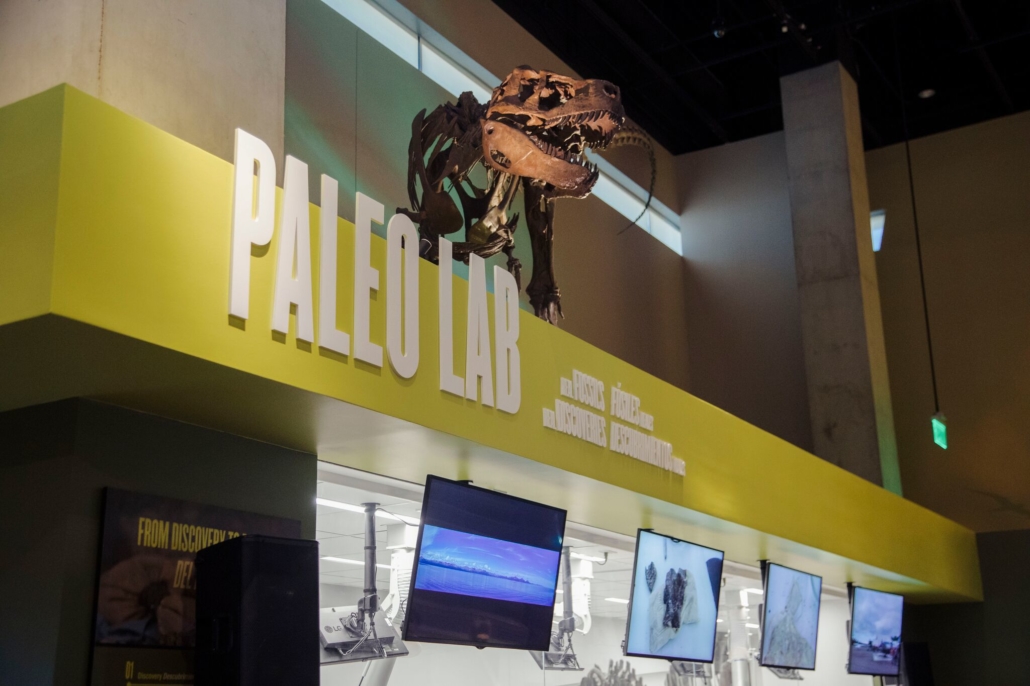 DALLAS (AP) – Beneath the open jaws of a crouching dinosaur, Briana Smith pressed her small rotating saw into a plaster cast. Inside the cast lay pieces of a creature that had roamed Alaska about 70 million years ago.

The Dallas Morning News reports Smith’s colleague Tony Fiorillo, a paleontologist and chief curator of the Perot Museum of Nature and Science, found the fossils on one of his many expeditions to the Arctic. He had swaddled them in a cocoon of paper, burlap and plaster to protect them on the 4,000-mile helicopter, plane and tractor-trailer journey to Dallas. Now, Smith was beginning the long process of figuring out exactly what Fiorillo had brought back.

Normally Smith, an assistant fossil preparator at the Perot Museum, works far from public view in a basement lab in Fair Park. Starting this week, she and her colleagues will be on display alongside many of the dinosaur bones they helped extract and assemble. The museum’s new Paleo Lab, which opened Tuesday, lets viewers watch through a large window as staff and volunteers hunch over specimens from as nearby as Rockwall County and as far away as America’s northern frontier. 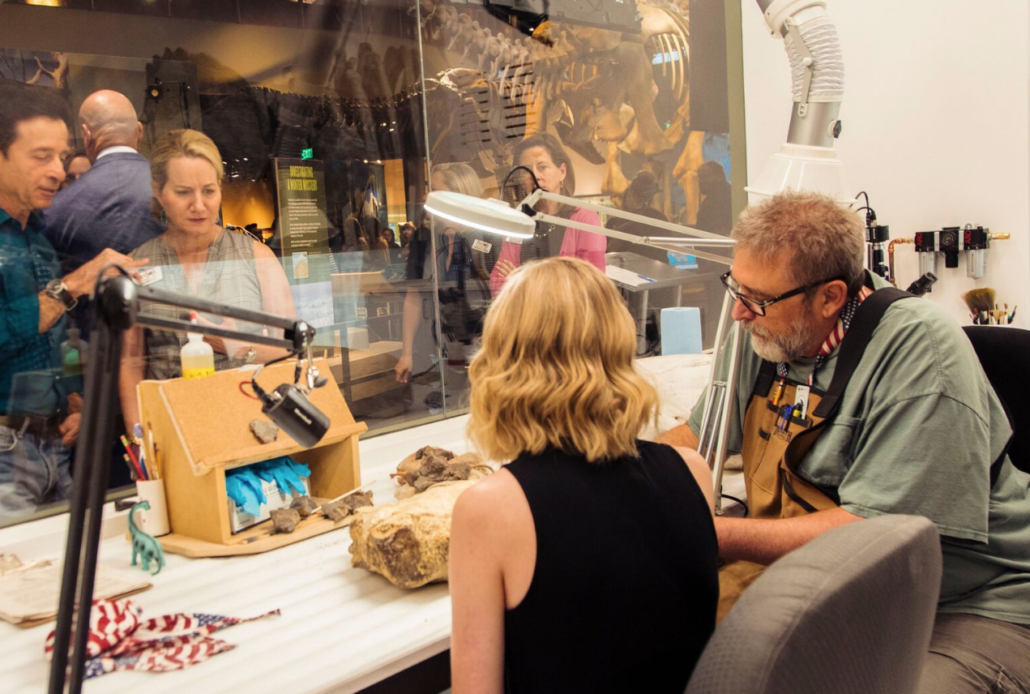 “What we’re really trying to do is connect the experience of going from the field, to the lab, to this,” Fiorillo said earlier this week, gesturing at the dinosaurs surrounding him on the museum’s fourth floor, which holds two species, Pachyrhinosaurus perotorum and Nanuqsaurus hoglundi, that he and his colleagues discovered.

A new skeletal reconstruction of Nanuqsaurus, a relative of T. rex, perches on the roof of the Paleo Lab.

The goal is for visitors to gain a better understanding of the scientific process, Fiorillo said. “We as scientists are not filled with a lot of ‘ah-ha!’ moments. There’s a lot of — I don’t want to say ‘tedium,’ but I just did. It’s a very laborious process to get to the point where we recognize we have something new.”

Fiorillo discovered Pachyrhinosaurus and Nanuqsaurus in Alaska in 2006. But it took Ron Tykoski, director of the museum’s paleontology lab, and his staff more than four years to clean, reconstruct and identify them. 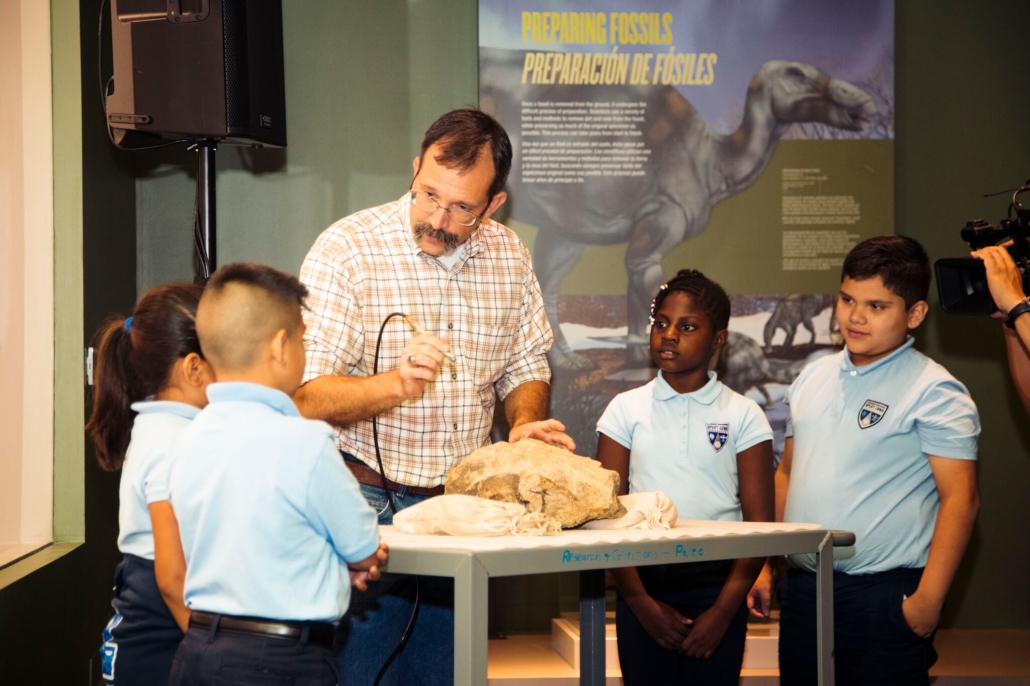 Now visitors will be able to watch this process as it unfolds. After Smith opened the plaster cast, which she thought might contain a limb from another Pachyrhinosaurus, she used a brush and air blower to scatter dust and loose dirt from the fossil. Next, she picked up a squeeze bottle and dabbed glue into cracks in the bone to hold it together.

Her next step would be to use an “air scribe,” a tool that looks and sounds like a dentist’s drill but works more like a mini jackhammer, to chip away at the rock and reveal more bone, bit by bit.

This monthslong process led to the reconstruction of a Pachyrhinosaurus skull, on display just across from the Paleo Lab.

Pachyrhinosaurus was a horned dinosaur that weighed about as much as a rhinoceros. During the excavation, Fiorillo and his team observed toothmarks on the bones and wondered what may have eaten the 23-foot creature. Back in the fossil lab, Fiorillo and Tykoski realized they also had the remains of Nanuqsaurus — its name means “polar bear lizard” — which Fiorillo had found in the same hole in the ground as Pachyrhinosaurus.

He hopes more discoveries like these will be made — this time, in full view of the general public.

Tykoski, Smith and their colleagues will continue to work in the larger paleo lab in Fair Park as well. The Fair Park spot was the Perot Museum’s previous home and holds its collection of thousands of dinosaur bones and teeth. Staff and volunteers will cycle through both spaces and keep the museum’s Paleo Lab open and staffed during regular museum hours.

Some of the Paleo Lab’s work will end up on display at the museum, but most will be catalogued and placed in its growing collection of 54,380 fossils, where they’ll add to scientists’ understanding of the distant past.

For her part, Smith is happy for the chance to watch kids’ curious faces as they peer through the window at her work. “I really like it,” she said. “It’s a little less lonely.”

I.M. Chait posts impressive results so far this year in many art categories
Scroll to top