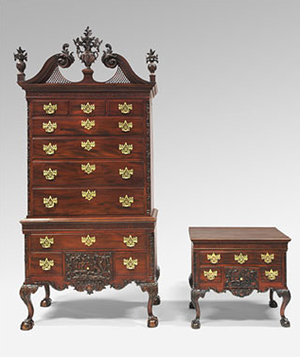 PHILADELPHIA — The Philadelphia Museum of Art has agreed to purchase the exceptional mahogany dressing table that has been on loan to the museum for 36 years. Made in Philadelphia in the late 1760s or early 1770s, the table is the mate to the museum’s monumental high chest, which was donated in 1957 by Amy Howe Steel Greenough. The dynamic carved decoration on both the high chest and the dressing table depicts a scene from Aesop’s fable of “The Fox and the Grapes” on their central drawers. The impressive proportions of these remarkable examples of 18th-century craftsmanship echo the architectural framework of the bedchamber for which they were made. Together, they epitomize the elegance and sophistication that distinguish Philadelphia furniture as the finest produced in British colonial North America.

“The museum has now realized its cherished dream of keeping ‘The Fox and the Grapes’ dressing table together with its companion high chest,” said Timothy Rub, the Museum’s George D. Widener Director and Chief Executive Officer. “The two anchor our galleries of early American art; and now that their future together is secure, we can continue to display and interpret them as superlative artistic achievements.”

The high chest was known to museum curators early in the 20th century when it was borrowed from Mary Fell Howe for the 1924 exhibition Philadelphia Chippendale. Lauded for its stately presence, highly figured mahogany, abundant carved ornament, and the rare depiction of a narrative from one of Aesop’s fables, the high chest also generated curiosity about whether or not its companion piece—the dressing table—was still in existence. “The Fox and the Grapes” dressing table was soon discovered and made its debut in William MacPherson Hornor, Jr.’s 1935 publication The Blue Book of Philadelphia Furniture: William Penn to George Washington. Joseph Kindig, Jr., the preeminent York, Pennsylvania, furniture and gun dealer, purchased the dressing table from Miss Eliza Davids in the late 1930s. Though Kindig was an antiques dealer, the dressing table was not offered for sale. Instead, it remained in the Kindig’s private home. Mr. Kindig died in 1971, and soon thereafter a friend of the Museum alerted curators to the whereabouts of the coveted “Fox and Grapes” dressing table. The Kindigs agreed to lend the dressing table so it could be displayed next to its high chest in 1976 for Philadelphia: Three Centuries of American Art, the great survey celebrating American art exhibited at the Museum during the bicentennial year. The two looked superb together—each had found its accompaniment—and after the exhibition closed, the dressing table remained on loan to the museum.

The purchase of the dressing table will be funded by gifts already received or to be solicited from generous individuals over the next several years as well as through funds raised by the deaccession and sale of less significant furniture in the museum’s collection. The deaccessioned works of art include a Philadelphia easy chair dating to about 1755 that the museum purchased in 1925 and two colonial side chairs that will be sold at the September Americana sale at Christie’s in New York. Ten pieces of American furniture, including a colonial Philadelphia high chest, dressing table, turret-topped card table, and tilt-top tea table as well as an 1829 painted chest of drawers from the Mahantango Valley, will be sold at Sotheby’s in New York in January.

“The Fox and the Grapes” High Chest and Dressing Table:

“High chests and dressing tables—the ultimate in bedchamber furniture for fashionable colonials living in British North America—were conceived together and served as foils to one another, “ said Alexandra Alevizatos Kirtley, the Montgomery-Garvan Associate Curator of American Decorative Arts, who spearheaded the effort to acquire the dressing table. “More than in any other such pairings, ‘The Fox and the Grapes’ complement each other in size and ornament. Each by itself is, in a sense, incomplete.”

Cabinetmaking in Philadelphia thrived from the early 1700s, when it was distinguished by the use of variously turned elements and the choicest local walnut or imported mahogany. By the late 1740s, when a voluminous baroque line dominated contemporary furniture, a bevy of London-trained carvers had arrived in Philadelphia and transformed the design of architectural decoration and furniture. Suddenly, elegant rococo carving suffused the interiors of houses and important public spaces such as at the State House (Independence Hall) and Saint Peter’s Church. Naturally, the furniture that filled these spaces followed suit. “The achievement represented by these two case pieces—in their monumentality, choice wood, and the intricacy of the carved composition as well as its execution—bears out the notion that the art of Philadelphia cabinetmakers and carvers during this period was unmatched elsewhere in the colonies. It rivaled—and often exceeded in quality and creativity—the best work then being done in London,” noted Kirtley.

High chests were used to store clothing and valuable household textiles, while dressing tables stored the implements of dressing and served as the stage where men and women sat and dressed themselves. As the taste for them declined at the end of the 18th century and their original owners passed away, the ensembles were often separated and divided among heirs. It is not known who originally commissioned “The Fox and the Grapes” ensemble: the backboards of the high chest bear the name of Philadelphia Comptroller James Milligan and the dates 1783 and 1784, suggesting that it was sold at sales (or vendues), overseen by Milligan, that supported the needs of the Continental Army. The donor of the high chest wrote in 1931 that her father Herbert Marshall Howe had inherited the high chest from her grandfatherBishop Mark Anthony De Wolfe Howe (1808-1895). She remarked that her grandfather had purchased it “from whom –I do not know!”Miss Eliza Davids, who owned the dressing table in 1935, is the first documented owner of it. Miss Davids was the daughter of Richard Wistar Davids and a descendant of Samuel Morris (1734-1812) and Isaac Greenleafe (1715-1771), both scions of Philadelphia families and leading patrons of the decorative arts.

“The Fox and the Grapes” high chest and dressing table were designed for placement in a bedchamber with related moldings and carving. The high chest’s waist molding is several inches higher than the top of the dressing table, indicating that it was positioned just above the room’s horizontal mid-molding, or chair rail, while the top of the dressing table would have fit just below the chair rail. The swirling figure of the mahogany grain gives tremendous liveliness to the broad expanses of the drawers, and the lavish carving that overlays it adds a playful, rococo whimsy to the baroque form.

Framed by graceful scrolls, floral ornament, and fretwork, the centerpiece of the carving is the central drawer depicting the moment of truth from Aesop’s fable of “The Fox and the Grapes”: a proud and skillful fox who cannot reach a bunch of succulent grapes decries them as sour and not desirable after all. The carved scene follows an established format for illustrating the fable, and was borrowed directly from plate 21 of English carver Thomas Johnson’s 1761 publication of designs, where it is at the base of a large pier glass. On “The Fox and the Grapes” high chest and dressing table, the scene may have related directly to other elements in the interior architecture of the original owner’s house; fables and famous scenes from classical mythology embellished mantel surrounds in Britain and Philadelphia (for instance, the central tablet depicting Aesop’s fable of “The Dog and His Shadow” by carver Hercules Courtenay from Samuel and Elizabeth Powel’s house that survives at the Philadelphia Museum of Art). While research continues to establish whose carved work is on the high chest and dressing table, Philadelphia carver Hercules Courtenay, who trained in Ireland with Johnson, is known to have incorporated Johnson’s designs on other Philadelphia furniture and interior architectural elements.

The taste for incorporating Aesop’s fables within interiors was a popular fancy among European and American followers of Enlightenment philosophy who found useful moral lessons in the ancient tales of animals’ cunning trickery. The tale of “The Fox and the Grapes” reminds one to be happy with what he or she has; alternatively, it serves as an allegory about the ills of greed, selfishness, and pride. It is ironic that this iconography appears on these lavish emblems of wealth and pride. “Some suggest that the irony of this particular moral emblazoned on the two pieces of carved mahogany furniture may have been lost on its original owners, but I think it was more likely a disclaimer—almost an admission of the guilty pleasure they enjoyed from owning such splendid furniture,” explained Kirtley.

Only two other high chest and dressing table sets with narrative carving are known to have been made. One of them survives together at the Metropolitan Museum of Art and the other is separated, with the dressing table at the Museum of Fine Arts, Boston, and only the base to the high chest surviving at the Diplomatic Reception Rooms of the United States Department of State in Washington, D.C.

“This acquisition affirms the preeminence of the Philadelphia Museum of Art’s collection of colonial Philadelphia furniture and its commitment to exhibiting and interpreting for its public the very best of colonial North America’s artistic achievements,” said Rub.

About The Philadelphia Museum of Art:


The Philadelphia Museum of Art is among the largest museums in the United States, with a collection of more than 227,000 works of art and more than 200 galleries presenting painting, sculpture, works on paper, photography, decorative arts, textiles, and architectural settings from Asia, Europe, Latin America, and the United States. Its facilities include its landmark Main Building on the Benjamin Franklin Parkway, the Perelman Building, located nearby on Pennsylvania Avenue, the Rodin Museum on the 2200 block of the Benjamin Franklin Parkway, and two 18th-century houses in Fairmount Park, Mount Pleasant and Cedar Grove. The Museum offers a wide variety of activities for public audiences, including special exhibitions, programs for children and families, lectures, concerts and films. 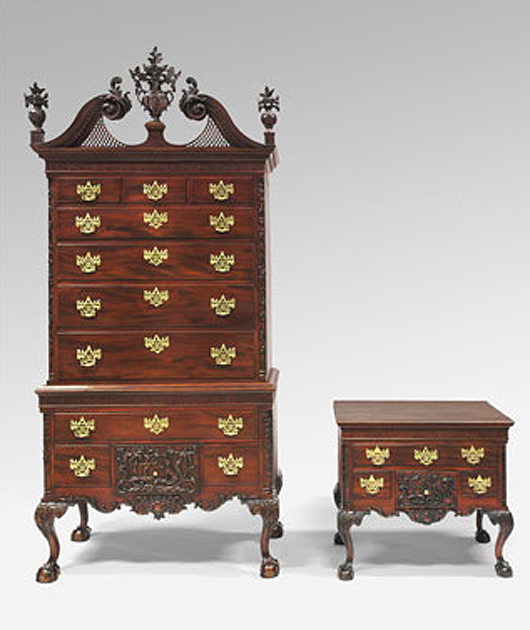