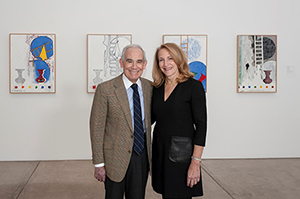 PHILADELPHIA – The Philadelphia Museum of Art has announced the acquisition of one of the nation’s leading private collections of contemporary art, formed by Keith L. and Katherine Sachs.

Ranging in date from the 1950s to the present, the promised gift of 97 works from the Sachs Collection represents a transformational moment for the institution and its collections. It is exceptional for a concentration of works by American masters Jasper Johns and Ellsworth Kelly, a strong focus on major British and German artists, and important works of outdoor sculpture, large-scale photography and video art. The couple, closely associated with the museum for decades, has been collecting art for more than 40 years, and Keith Sachs has been a trustee since 1988.

Timothy Rub, the museum’s director and CEO, said: “The Sachs Collection reinforces and expands the scope of the museum’s holdings of contemporary art and will enable us to present to our audiences a more comprehensive view of the art of the past half century. It brings this institution into the top echelon among encyclopedic museums that collect contemporary art. To find a comparable antecedent in terms of the potential impact of this gift for the Museum’s contemporary art collections, one undoubtedly would have to look back to the great collections donated to us by Albert E. Gallatin and Louise and Walter Arensberg in the early 1950s. For this reason we are delighted to celebrate this gift by naming the museum’s suite of galleries devoted to modern and contemporary art the Keith L. and Katherine Sachs Galleries.”

The museum will officially name the galleries in honor of Mr. and Mrs. Sachs in a dedication ceremony scheduled for March 3. In summer 2016, the museum will also present a full-scale exhibition devoted to the Sachs Collection.

The collection’s strengths in works by Johns and Kelly, pivotal figures in the history of 20th-century American art, richly complement the two galleries that the museum has dedicated to these artists for many years. It also includes the first works by other important artists, including Carl Andre, Serra, Baselitz, Smith and Piero Manzoni, to enter the museum’s collection.

Four works from the collection have been placed on view in the Modern and Contemporary Galleries. Among them is Johns’s bronze 0-9 (2008) in the Keith L. and Katherine Sachs Gallery (Gallery 171) and 5 Postcards (oil and encaustic on canvas), a work consisting of five paintings completed by the artist in 2011, which is now exhibited in a museum for the first time in the Anne d’Harnoncourt Gallery (Gallery 182). Kelly’s Cutout in Wood (1950) has been placed in Gallery 175 in context with the artist’s early Paris works. In addition, Erdtelephon (Earth Telephone), a mixed-media sculpture by Beuys, can be seen in Gallery 170.

Carlos Basualdo, the Keith L. and Katherine Sachs senior curator of contemporary art, said: “The collection is remarkable not only because it contains stellar works that reflect some of the most daring and productive directions in contemporary art over the past few decades, but also because it reflects a vision that is deeply personal and grounded in Keith and Kathy’s heartfelt affection and admiration for the artists whose work they collect. It is also a testament to the deep and lasting relationship with Philadelphia that has inspired their artistic interests and collecting activities.”

Mr. and Mrs. Sachs have been supporters of the Philadelphia Museum of Art since the 1970s, when Katherine Sachs worked in the museum’s public relations department and later as a museum guide, offering tours of the collections focusing on contemporary art. She has also contributed scholarship to numerous museum exhibitions organized by the Department of European Painting before 1900, including “Cézanne” (1996), “Van Gogh: Face to Face” (2000), and “Cézanne and Beyond” (2009), for which she served as co-curator. Keith Sachs serves as chair of the museum’s modern and contemporary art committee and has been active on trustee committees including architecture and facilities (chair), collections, executive (vice chair), finance, and strategic planning committee.

Keith Sachs is the former CEO of Saxco International LLC, a principal distributor of packaging material to producers of alcoholic beverages in North America. In addition to their commitment to the museum, the Sachses have been active supporters of contemporary art in Philadelphia. Keith Sachs serves as chair of the board of overseers at the University of Pennsylvania’s School of Design, and Katherine Sachs is an emeritus trustee of the University of Pennsylvania and serves on the board of overseers of the university’s Institute of Contemporary Art, where she was chair for 10 years. At Penn the couple endowed the Keith L. and Katherine Sachs Professor of Contemporary Art, the Visiting Professor in the Fine Arts at Penn Design, the Sachs Guest Curator Program at the ICA, and the Sachs Fine Arts Program Fund. 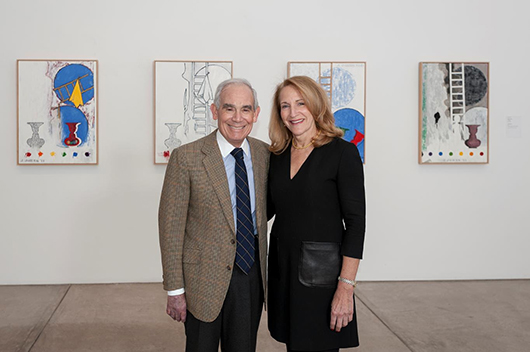