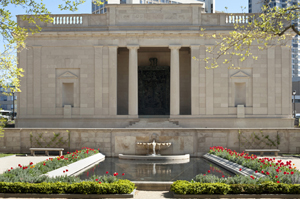 PHILADELPHIA (AP) – After more than three years of torn-up landscaping, yellow caution tape, billows of steam and dust, bike barricades, convoluted entrance routes, vanished sculptures, and, lately, a building shut as tight as a limestone crypt, the Rodin Museum on the Benjamin Franklin Parkway is about to emerge as something both familiar and utterly startling.

This is no nip-and-tuck job, no simple face-lift. The Rodin and its surrounding gardens have been transported back in time to 1929, thanks to a $9.1 million reincarnation of the original vision of architect Paul Crét and landscape architect Jacques Gréber.

Friday’s reopening of the museum at 22d Street is the latest in a series of 2012 Parkway enrichments, among them the new Barnes Foundation building next door and, a few blocks away at Logan Square, the new Sister Cities Park.

When the Rodin opens its doors, all its sculptural figures will have been returned to their original settings at the entrance, in building and gate niches, and outside in the gardens.

Almost all the sculptures—which have not been arrayed outside together in more than half a century—have been cleaned and restored. The monumental Gates of Hell, Auguste Rodin’s great masterpiece, 37 years in the making, is being worked on; only The Burghers of Calais, once again set in the east garden, remains to be cleaned.

For the first time ever The Burghers will be paired with a monumental sculpture in the west garden—a never-realized element of the original Crét plan—thanks to a long-term loan of Three Shades from the Iris and B. Gerald Cantor Foundation.

Inside, the galleries have been completely restored in what Timothy Rub, director of the Philadelphia Museum of Art, has called an “archaeological” effort.

Where once faux-marble covered central gallery walls, visitors will now encounter pale linen. The small octagonal side galleries are now washed in Pompeian red, not yellow or olive green. Paint has been removed from wood appointments and furnishings and from the imitation Caen stone of entrance vestibules left and right.

The galleries inside have been reinstalled to emphasize the importance of The Gates of Hell as a continuing source of inspiration to Rodin and to explore Rodin’s public monuments and his Balzac sculpture, looking down on the roiling damned.

Every detail that Crét and Gréber pored over has been pored over again, right down to the sculptural pedestals, many thought to have been designed by the young Louis Kahn, who interned with Crét during work on the museum.

“Louis Kahn proposed to his wife right over there,” Joseph J. Rishel, senior curator for the museum, said the other day, pointing over his shoulder. “Mrs. Kahn told me . . . he proposed to her in the Balzac room.”

The Art Museum administers the Rodin Museum, which houses the collection of about 130 sculptures assembled by Philadelphia movie mogul Jules Mastbaum and bestowed on the city.

Mastbaum, who died in 1926 before the museum opened, commissioned a copy of Rodin’s great marble The Kiss from the Musée Rodin in Paris. (Rodin died in 1917.) The copy, sculpted by Henri Gréber, father of the museum’s landscape architect, served as the centerpiece of the main gallery from 1929 until 1967.

That year, it was finally decided that the Rodin sculptures arrayed outside in niches and on the grounds had to be sheltered from pollutants showering down through the city’s industrial atmosphere.

They were all brought inside, crowding out The Kiss.

But since this popular replica was central to Mastbaum’s vision and Crét’s architectural conception, it has now been returned, after a cleaning and restoration.

“They wanted this thing here,” Rishel said. “Crét was here practically every day, supervising every detail. It was all part of the fabric of the original. This is what you would have seen when it opened in 1929.”

Sally Malenka, conservator of decorative arts and sculpture, spearheaded the archaeological dig into the museum’s past, discovering the original painted wall surfaces and other obliterated elements through examination of paint chips, Crét’s drawings and accounts, and contemporary newspaper descriptions.

“It’s interesting that for a building as recent as 1929, some of the history of what the original interior looked like is really not known,” Malenka said. “We had some old black-and-white photographs and some correspondence. So we knew there was fabric on the walls. We didn’t know at that time that the rooms were red, so there was a combination of looking for archival materials and other historical or contemporary accounts, and also investigating what the finishes were by what remained in situ.”

Jennifer A. Thompson, associate curator, faced a somewhat different problem. While The Kiss would hold center stage in the main gallery, how should the rest of the collection be displayed? What would make sense?

She found her answer in The Gates of Hell, which greets approaching visitors passing through the museum’s restored Meudon Gate.

“One of the things he very often did is take a piece that appeared in plaster on the Gates and pull it off, enlarge it, and cast it in bronze or carve it in marble, and he’d give it a new title and it would have a life independent of The Gates,” said Thompson. “The collection here, a very strong proportion is related to The Gates of Hell, so it’s a very nice opportunity to pull those out in a grouping and explore their relation to The Gates and draw a little more attention to The Gates, too.

“It has 227 figures—and it’s overwhelming. How do you get into it? How do you get a feel for what you’re looking at? By looking inside the building at the smaller pieces, and learning more about them, and going back out and for a second look.”

The Thinker, perhaps Rodin’s most famous piece, was originally conceived as a small brooding figure at the top of The Gates.

The museum’s large Thinker was cleaned and refurbished in 2009 during landscaping restoration by the firm of Laurie C. Olin. It sits again in front of the museum. A smaller version, usually on display at the Art Museum, will now greet visitors in the main gallery.

Dozens of sculptures, many on rebuilt or original Crét-Kahn pedestals, are arrayed around the main gallery—all inspired by The Gates.

In its last life, the main gallery was dominated by The Burghers and four outdoor sculptures. The museum has been able to place them all outside again thanks to cleaning and conservation that includes application of new protective fluorocarbon-based coating developed by the museum’s conservation staff and Arkema, a Norristown chemical company. (The Burghers awaits its treatment.)

Andrew Lins, chairman of the museum’s conservation department, said “sulfur dioxide and its relatives” in polluted air forced the sculptures inside in the first place. The new coating should provide low-maintenance protection for decades.

“I wanted the sculptures that were placed by Crét in key positions on the exterior of the museum and in the garden to be once again outdoors,” said Rub. “The Burghers is too large a work to fit comfortably within the galleries, and after returning this heroic work to its commanding place in the east garden, it seemed only fair to return The Kiss to its place in the main gallery.” 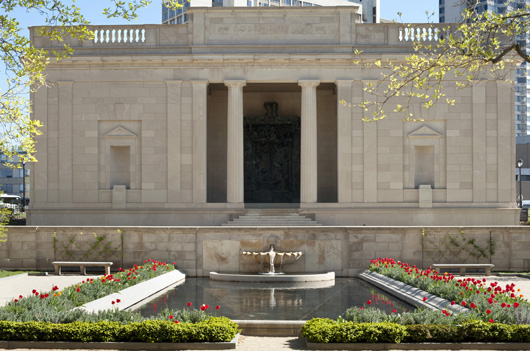 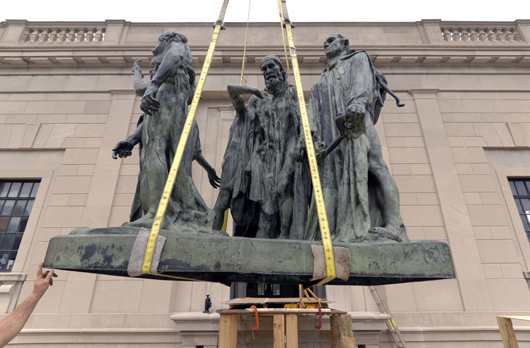 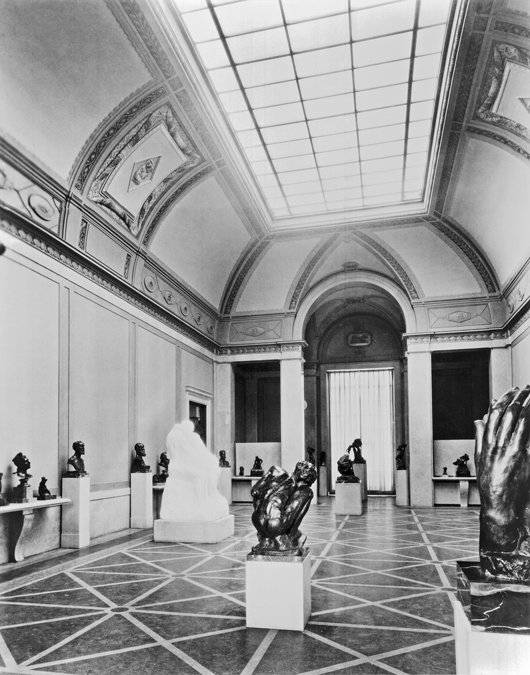