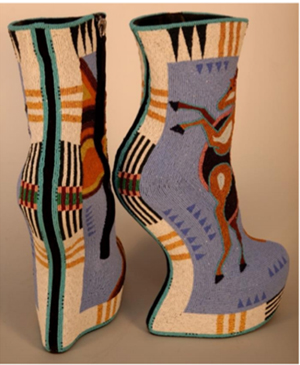 KANSAS CITY, Mo. – Masterworks by Plains Indian artists from before contact with Europeans to the present day will be on view in a major exhibition at The Nelson-Atkins Museum of Art in Kansas City beginning Sept. 19. The Plains Indians: Artists of Earth and Sky unites the finest Plains Indians works of art from European and North American collections, giving visitors a rare opportunity to see the objects in Kansas City. The opening of the exhibition will be honored by Native American tribal leaders giving private and public blessings, a public celebration with dancers and drummers and programming through the run of the exhibition, which closes Jan. 11, 2015.

The exhibition, curated by Gaylord Torrence, one of the nation’s leading scholars of Plains Indian art and the Fred and Virginia Merrill Senior Curator of American Indian Art at the Nelson-Atkins, opened in Paris in April and was seen by nearly 200,000 visitors. Following Kansas City, it will be on view at The Metropolitan Museum of Art in New York from March 2 to May 10, 2015.

“The enormous popularity of this exhibition in Paris speaks to the power and beauty of these objects, and the fascination for this culture,” said Julián Zugazagoitia, Menefee D. and Mary Louise Blackwell CEO & Director of the Nelson-Atkins. “We have a geographic advantage in Kansas City because we are so close to the Great Plains where these incredible objects were created. We are also building on the legacy of Sacred Circles, the seminal exhibition at the Nelson-Atkins in 1977 that generated new understanding of the artistry of Native Americans.”

The Plains Indians: Artists of Earth and Sky brings together Plains Indian masterworks, from pre-contact to contemporary, ranging from a 2,000-year-old Human Effigy stone pipe to 18th-century painted robes to a 2014 beaded adaptation of designer shoes. Works of art collected centuries ago by French traders and travelers will be seen together with those acquired by Lewis and Clark on their famous expedition of 1804-06, along with objects from the early reservation era and contemporary works based in traditional forms and ideas. Many of the objects will be seen in the U.S. for the first time.

To celebrate and announce this historic exhibition, numerous tipis have been placed at locations around Kansas City, including on the south lawn of the museum, to commemorate the nomadic lives of early Plains peoples. The Plains Indian tipi is a classic architectural form, both beautiful and functional. It is one of the finest portable dwellings ever created and supported lives on horseback in pursuit of the buffalo. 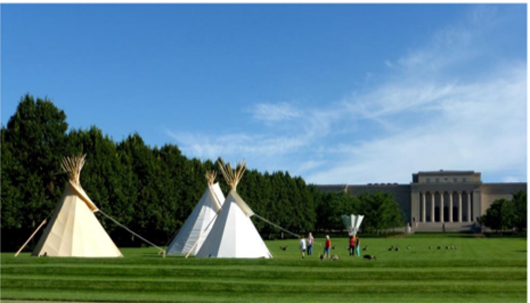 “This exhibition is a beautiful way to pass our Native American culture, tradition and language on to our young children,” said Manny King, Student Development and Activities Coordinator at Haskell University. “I was very impressed when I saw the beautiful tipis on the lawn at the Nelson-Atkins–it touched my heart. I would encourage everyone to come and enjoy this exhibition and feel the energy and spirit of the Plains Indians.”

Public and private blessings of the exhibition will be held in the week leading up to the opening on Sept. 19. An afternoon of Native American art, dance and song will be held at the museum from Noon to 4 p.m. Sunday, Sept. 21. Dance and song performances will feature Larry Yazzie and the Native Pride Dancers, Haskell Indian Nations University with nationally acclaimed drum group, The Boyz, Royal Valley Dancers of U.S.D. #337, and Prairie Band Potawatomi-Nation Reservation with drum by Little Soldier Singers. Visitors will also enjoy storytelling and flute playing and demonstrations with bead and quill artists Joyce Browing Thunder Fogarty and her daughter Juanita Growing Thunder Fogarty.

“Plains peoples traditionally lived in the land, not on it,” said Torrence. “Their art expresses personal and cultural histories, mythologies and religious beliefs, and these cannot be separated from the natural world. All came from the land—North America’s Great Plains—with its abundance of life forms and natural phenomena.”

The works in the exhibition will reflect the significant place that Plains Indian culture holds in European history and in the heritage of North America. They convey the continuum of hundreds of years of artistic tradition, maintained against the backdrop of monumental cultural change.

“A powerful sense of place is embodied in Plains art,” said Torrence. “In its varied forms and materials, as well expressed beliefs and concepts, the works are representations of the Great Plains of North America. It is important for these objects to be seen here in Kansas City on the eastern Plains. We must remind ourselves as well that Kansas City was once the heart of French America—and Plains peoples and the French have a shared history here.”

A group of nine videos commissioned by the Nelson-Atkins will accompany the exhibition. Most were produced by Dylan McLaughlin, a Native American who lives and works in Santa Fe, New Mexico. A number of the videos are conversations with Native American artists featured in the exhibition, and these videos present their work, inspiration and history. A scholar and curator were interviewed in the remaining two videos; all will be played on a loop in the last room of the exhibition, giving visitors the chance to hear Native American voices discuss their heritage and culture. Additionally, all of the videos can be viewed on the Nelson-Atkins website.

The exhibition was conceived by Stéphane Martin, President of Quai Branly, who traveled to the United States in 2010 to explore the idea. He visited the new and highly acclaimed American Indian galleries at the Nelson-Atkins and invited Torrence to curate the exhibition. When the Metropolitan Museum agreed to be the third venue, the tour was complete.

“European museum curators expressed desire for the rare, early Plains Indian works of art in their holdings to be exhibited in America,” said Torrence. “They particularly wanted Native American descendants of the artists to experience their ancestor’s remarkable creations.” 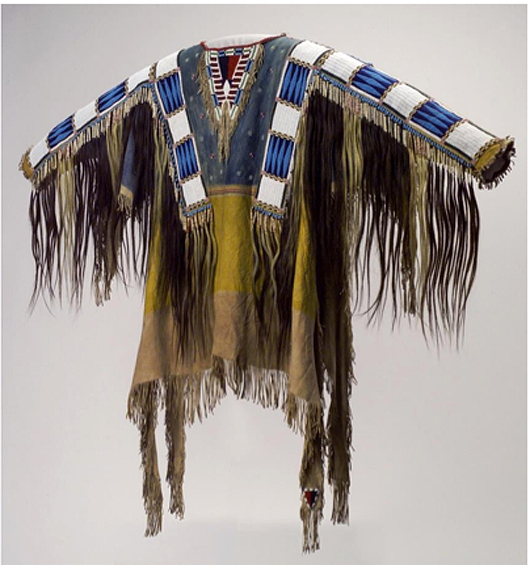 A fully illustrated 320-page catalogue with essays by Torrence and other leading experts, edited by Torrence, will accompany the exhibition. The exhibition at the Nelson-Atkins closes Jan. 11, 2015.

The exhibition was organized by the Musée du Quai Branly Paris, in partnership with The Nelson-Atkins Museum of Art, Kansas City, and in collaboration with The Metropolitan Museum of Art, New York.

In Kansas City, the exhibition is supported by Morton and Estelle Sosland, Fred and Virginia Merrill, Alan and Berte Hirschfield, Jim and Elizabeth Tinsman, John and Kay Callison, Mick and Kathy Aslin, Henry W. Bloch, Rex and Pat Lucke, the Barton P. and Mary D. Cohen Charitable Trust, the Committee of 100, the Donald J. Hall Initiative and our Honorary Committee. Additional support has been provided by the National Endowment for the Arts.

About The Nelson-Atkins Museum of Art:

The Nelson-Atkins in Kansas City is recognized nationally and internationally as one of America’s finest art museums. The Nelson-Atkins serves the community by providing access and insight into its renowned collection of more than 33,500 art objects and is best known for its Asian art, European and American paintings, photography, modern sculpture, and new American Indian and Egyptian galleries. Housing a major art research library and the Ford Learning Center, the Museum is a key educational resource for the region. The institution-wide transformation of the Nelson-Atkins has included the 165,000-square-foot Bloch Building expansion and renovation of the original 1933 Nelson-Atkins Building.