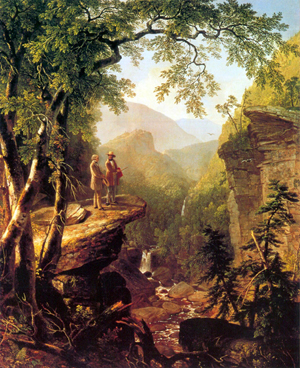 ‘Kindred Spirits’ by Hudson River School painter Asher Durand. From the collection of the Crystal Bridges Museum of American Art.

BENTONVILLE, Ark. (AP) – Art lovers got their first look Friday at the treasures amassed by Wal-Mart heiress Alice Walton and displayed at the new Crystal Bridges Museum of American Art, an enormous facility that took six years to build.

Walton helped open the museum that’s situated on 120 acres just a 10-minute walk from Bentonville’s downtown square. The museum expects to draw about 200,000 visitors in its first year of operation.

“This is it,” Walton said during a ceremony to mark the public opening. “I’m prejudiced, but it’s the most beautiful building I’ve ever seen.”

Designed by architect Moshe Safdie, the museum includes six buildings, two of which are structured as bridges over ponds fed by a clear-running stream.

“Crystal Bridges is now yours, may it flourish,” Safdie said.

The museum is named for Crystal Spring, one of three springs that feed the stream, and light reflected by the ponds plays off the copper-roofed structures.

The museum offered a day-early preview to the 5,000 or so people who bought memberships, which cost $75 for a family. They saw galleries that progress in chronological order, starting with the Colonial era and moving on to contemporary paintings and sculpture.

The collection includes masterpieces, such as Asher Durand’s landscape Kindred Spirits, and iconic images, such as Norman Rockwell’s Rosie the Riveter and an Andy Warhol portrait of Dolly Parton.

A gallery that will be used later for traveling exhibits now features pieces from the permanent collection. In all, the museum has about 400 paintings and sculptures on display, with twice as many in the vault.

Walton, daughter of Wal-Mart Stores Inc. founder Sam Walton, has a fortune estimated at $20.9 billion by Forbes, making her the 10th-richest American.

The cost of many of her acquisitions remains unknown, but she was able to afford just about anything she wanted. She bought “Kindred Spirits” for a reported $54 million.

The opening ceremony included a video recording featuring former President Bill Clinton and a Veteran’s Day acknowledgment of soldiers, past and present.

Copyright 2011 Associated Press. All rights reserved. This material may not be published, broadcast rewritten, or redistributed. 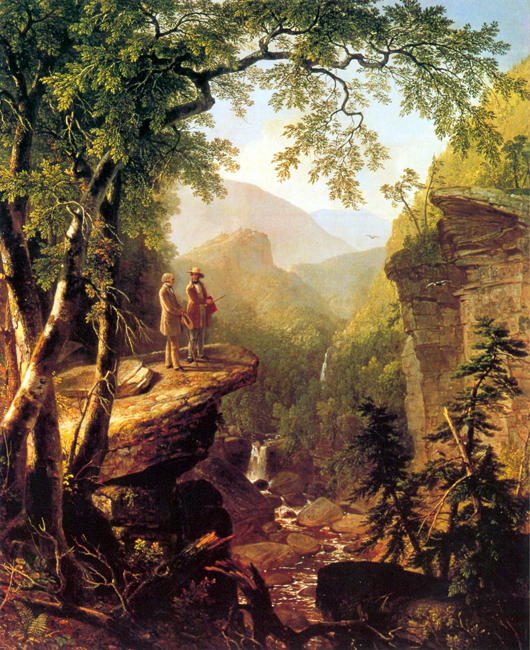 ‘Kindred Spirits’ by Hudson River School painter Asher Durand. From the collection of the Crystal Bridges Museum of American Art.